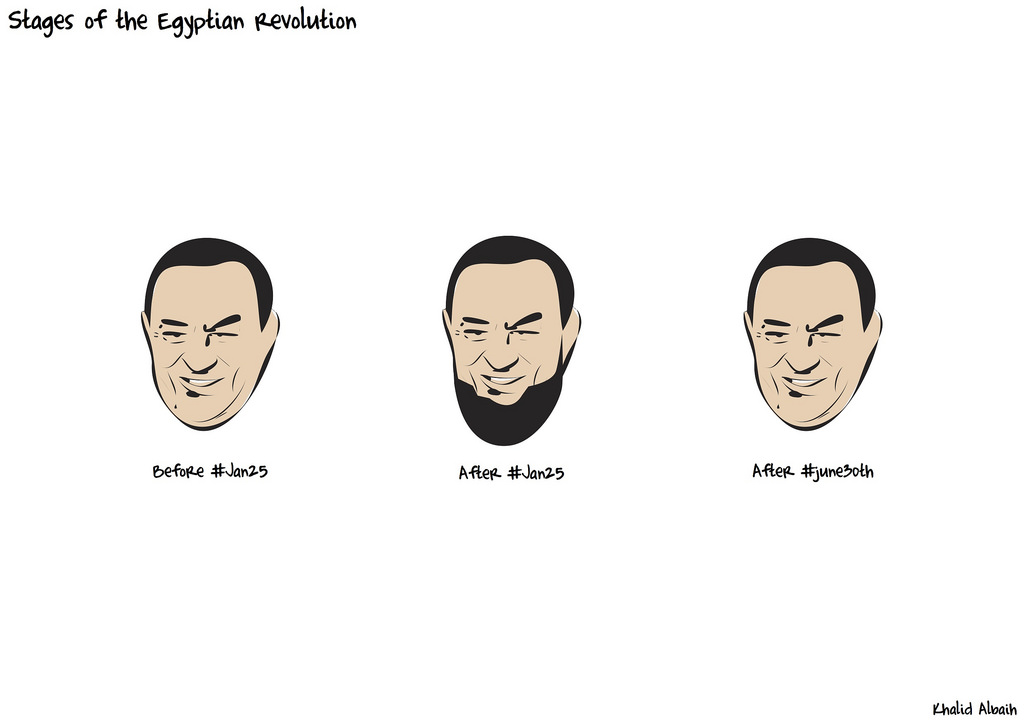 “The effectiveness of mathematics in the sciences is due precisely to the fact that mathematics formalises the scientific idea. Politics equally needs the capacity to quickly formalise the analysis of a situation and the tactical consequences of this analysis.This is the sign of a strategic vitality” Alain Badiou

In politics, time and timing of political action matter! In 2013, for example, when a genuine opposition took to the streets to contest the controversial policies of President Mohamed Morsi and the Muslim Brotherhood after one year in power, the movement was hijacked and then side-lined by the military establishment. Instead of renegotiating the social contract through democratic means, as intended by the movement, the military removed President Morsi from office by force. The timing allowed the military to claim a “second” revolution that heralded its political comeback to power, leaving many in the democratic opposition shocked, angry and with a confounding sense of failure.

Throughout the first term of President Abdel Fatah al-Sisi, heightened repression in the face of even mild demonstrations of dissent led many of those previously galvanized by the political possibilities of 2011 to retreat from formal politics altogether. In recent months, however, on the cusp of new presidential elections scheduled for March 2018, the prospect of contesting al-Sisi’s rule has reinvigorated political opposition. The Khaled Ali campaign for presidency, in particular, has served an important purpose. On the one hand, it has strengthened the coalition between parties, social movements, and individual activists. On the other, it has revived the spirit of 2011 movement, providing new impetus to organize, to identify the people and political aims that remain active, strengthen connections, and most importantly, ask once again “What is to be done”?

In this light, the timing of Khaled Ali’s recent retreat and decision not to run may seem like yet another failure for the movement working to reconvene the energy and spirit unleashed in Egypt 2011. The regime certainly hopes it will be seen this way. Yet, an alternative reading can see Khaled Ali’s retreat as moment of renewed opportunity for the movement. His decision marks an opportunity for the movement to redefine the parameters of political action, rather than submitting to an unwinnable contest in a formal political arena where the terms of action are dictated exclusively by the state: who is allowed to run in the elections, for how long, and with what consequences – how many candidates and activists will get smeared, threatened, and detained?

According to French philosopher Alain Badiou, himself a subject of the ’68 revolution in France and persistent thinker of revolutionary politics, elections pose a more important question for the movement in Egypt beyond the issue of participation. In the face of “the manifest powerlessness of any genuinely emancipatory programme within the electoral system,” Badiou suggests that the major challenge for movements seeking transformative change today is the ability to decide on their own end, both in the sense of their end-point in time and their end-goal – what “victory” for the movement would look like.

Beyond the issue of participation, then, the 2018 presidential elections in Egypt mark a crucial moment to ask: is time up for the movement or not? Will the end of the revolutionary movement in Egypt allow the state to decide – through repression or political events like elections – on the movement’s end? Or can the movement, forged in the temporal rupture opened over the course of the 18-day event in 2011, break with the notion of time imposed by the state and insist on its own time – the time to revaluate its meaning, consolidate its aims and priorities, and decide whether it should continue and how?

It is not the first time that elections are used not for creating, correcting, or becoming of the movement, but against the movement

In the summer of 2017, a small group from Berlin initiated a discussion with Alain Badiou on the challenge of continuing revolutionary politics in Egypt today, in light of all that has happened since 2011. In the first part of the discussion, Badiou reflected on the new form the movement in Egypt in 2011 took and the difficulty of formulating and organizing around an affirmative idea rather than a purely negative demand like “Mubarak out” or “Morsi out.” In this second portion of the conversation, he discusses the meaning and significance of elections and the importance of time for emancipatory movements

What do the 2018 presidential elections mean for the movement?

And so [in terms of] the question of organization and that of elections. [In many senses, elections do not propose] a contradiction between the movement and the state, it becomes a contradiction between two possibilities for the state itself: Muslim Brotherhood or army, in the case of Egypt. But even in our more pacifical countries, at the end, it’s a return to the conflict between classical right and classical left. And this is not better for the movement, because the movement precisely evolved largely by the idea to go beyond the classical left. In France, it was to go beyond the Communist Party, which was an old party without really a new premise for the future. And so this is why I think we have, in all situations, the same problem, in some sense, and Egypt has been a strong manifestation of that sort of problem.

We must create the possibility inside the new forms of the movement which have been invented in the ‘Arab Spring’. Inside that sort of movement, we must decide something like a new temporality of politics, a new form of time. Because, for the movement, we have the time of movement, which is a very specific time, one that is a creation of itself inside [general] time. But we know that this time is not at the scale, at the level of the power [of the state], because the power of the state has all the time and the movement does not. In some sense, the state can accept, for some time, that there is a movement, but, from the point of view of the movement, the question of time is a really difficult question, because we must know that, at the end, the movement finishes.

Who decides on the end of the movement?

The best for a movement is to decide for itself its own end, not elections

What is the ‘future’ of the movement itself?

AB: In fact, those questions are interesting because, within the movement, there is something very active, but also something passive too, too passive. That is the idea to continue. But why and for what?

Generally, to continue because it is a good situation, it is very nice, it is a joy! All of that is ok, it even is a necessity. But for me, it is a very new problem. Because in the classical situation of a revolutionary situation, all revolutionary situations, the movement was mostly about the idea to seize the power. And so, the question was [how] to organize the strength, which is then able to seize the power. It is a Leninist vision, something like that. Accordingly, we must have very strong organization. In some sense, an organization on a military form with hierarchy and so on. And with that, we can be inside of the state.  If we are not inside of the state, the strength of the movement is unity in complete diversity, unity of diversity, something like that, and to create a new place, a new collective situation somewhere. That is the question of time. This is a new question.

If the time now is not the time of preparation of insurrection, what exactly is this time about?

AB: There is today something like the passivity of the question of time. At the end, everybody is waiting for something to come from the state in some sense: for example, the proposition for elections or, for example, the military repression. But this time is passive in some sense. ‘No Mubarak’ is not the creation of the new situation properly. It is a symbolic negative point. But what is our proposition concerning the time?

We are waiting, in fact. We are waiting. And even here, in France, I know that there are small situations. For example, the movement in Paris against the labour law, our movement of the last year, it was accepted as a problem. Yet the problem was that all that was dissolved in elections, after all, with Macron coming to power. The movement itself was in some sense passive, passivity concerning the end of the movement, because there is always something that comes from outside which decides the end of the movement. And if we can’t solve that sort of problem, we are engaged in repetition, of something like a cycle.