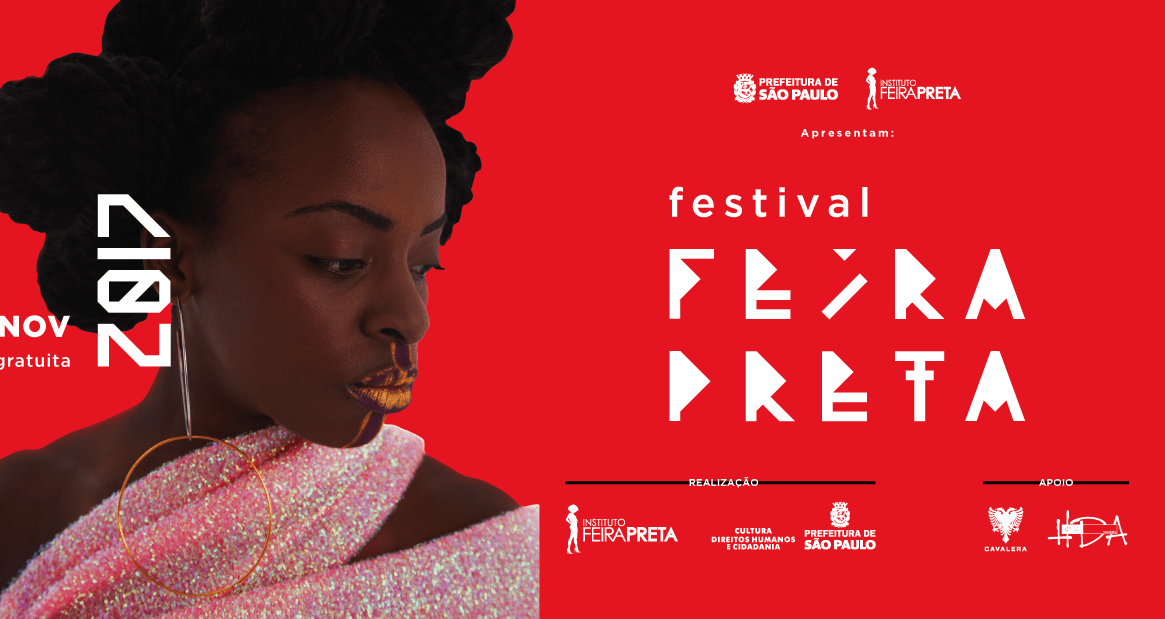 Every November for the last 16 years, the city of São Paulo, Brazil hosts Feira Preta (‘Black Expo’), the largest Afro-descendant fair in Latin America. It is an event of great importance for the black community in Brazil, a country with a majority black population.

Musical events, exhibitions of fine arts, cinema, dance, literature, fashion, gastronomy, etc., take place during this two weeks fair. Thousands of visitors — entrepreneurs in the footwear and clothing industry as well as stylists, designers, communicators and many others — come to the event to find out about, buy and promote products from the more than 100 exhibitors participating in the event. The Feria Preta is not only a space to do business, but also a meeting place of diverse initiatives that feed off of and complement each other to facilitate their individual growth.

In 2017, Adriana Barbosa, president and chief executive of the fair, was recognized as one of the 200 most influential people of African descent in the world by the MIPAD (Most Influential People of African Descent) global list. This award is part of the UN initiatives within the International Decade for People of African Descent programme. It was the first time that a black woman from Latin America was considered for this award, a prize already given to important personalities from the African diaspora such as Jamaican athlete Usain Bolt and thinkers from contemporary Africa like Nigerian writer Chimamanda Ngozi Adichie. In an interview with Afroféminas, Barbosa emphasized that:

This international award brought me a visibility that I had never achieved in my 16 years of work. It was because of this recognition advertised on the cover of the largest entrepreneurship and business magazine in the country and the recent award that I received for a standout business of social impact promoted by Facebook Brazil and the Small Companies & Large Businesses Magazine.

However, the fair began in a much less glamorous place. In an interview for the Brazilian website UOL, Barbosa said that the idea started out of need rather than a dream. In 2002, Adriana Barbosa had been fired from the company where she worked so she had to start selling clothes at street fairs. When she visited Vila Madalena, an upper-middle-class bohemian area in São Paulo, she saw the great potential for a market:

The market had a huge audience of young black people: The DJ was black and the hostesses were black, but the owners were white. And I wondered why is it that we black people manage to circulate money as producers of cultural content, but we do not have any money.

She then decided to organize an event, and in November 2002, she gathered about 40 exhibitors—in addition to musical shows and cultural events—in the Benedito Calixto square, an area that is famous in São Paulo for its outdoor fairs. It was a total success and the event attracted about five thousand people, a high number for a first edition.

Sixteen years later, Feira Preta went from the small square in São Paulo to Anhembi Morumbi (one of the largest convention centers in the city) and more than 700 exhibitors — of which 70% are women. Around 140,000 people have participated in the fair since its opening, and in 2017, it was organized for the first time in a decentralized manner. The fair also featured music, literature and film festivals, as well as professional training workshops. The Feira Preta extended to include multiple events in São Paulo and became even more significant in November, which is Black Awareness Month in Brazil.

Other ideas have emerged within the Feira, such as the Black Codes, a communication and market intelligence consultancy with an emphasis on racial issues. Ideas like this are due to the growth of the fair which is the result of multiple efforts to obtain support, financing and sponsors. According to Barbosa, support for many of these initiatives has been limited mainly because of ignorance and racism which added to the fear that the fair is merely an “ethnic” event:

It has always been difficult for potential sponsors to understand that the fair is a business, because more than half of our population is black [which is a significant population], with a big capacity for consumption, and able to create many business opportunities.

Adriana Barbosa has stated in several interviews that her intention was to establish a small fair and ended up creating an ecosystem that has opened a whole market which connects various sectors and entrepreneurs. For the last 16 years, this has developed a demand and a growing market for diverse products and services that traditional Brazilian commerce does not offer.

Regarding the importance of Feira Preta, in an interview with Afroféminas, Barbosa states that:

Festivals with a market format, like Feira Preta, are spaces where material and symbolic goods are exchanged, where we preserve our roots and transfer knowledge for future generations. Throughout the 16 years since its founding, Feira Preta has succeeded in strengthening and emphasizing the Brazilian black identity. The black population in Brazil represents more than 54% of the total population. This percentage is due not only to a high number of black people but, above all, because the Brazilian black population has begun to recognize itself as such through affirmative actions, quotas at the universities, cultural groups, and artists who, through their art and aesthetic quality, make a political statement in terms of their recognition and affirmation as black people.

Initiatives like the Feira Preta and the ways in which it revindicates and creates visibility for the efforts of black people in Brazil, gain even more importance in the context of the assassination of City Councillor and activist Marielle Franco. As Franco is mourned by those defending black people’s rights around the world, spaces giving strength to Afro-descendant communities’ projects and movements become ever more important.