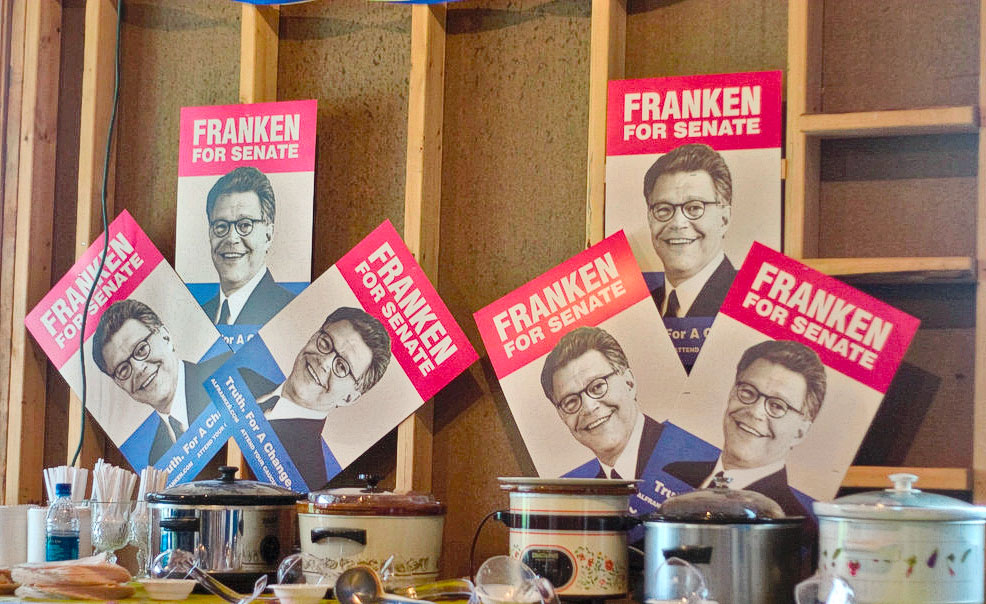 Thanks for your letter the other day. Actually, it’s the one you sent to my mother (and probably thousands of others who are wondering where the hell you are). Days before, I had started a letter to you to remind you of your commitment to democracy, women, people of color, people of all faiths, gay, straight, bi, questioning, trans, the poor, middle, and working classes, the dispossessed, the underrepresented, the dreamers, the disabled, the sick, the exploited, the tortured, the sexually harassed, the abused.

You were or are one of the upstanding white men of your generation. A man behind the tag #notallmen until November 16 at 7:06 a.m., when Leann Tweeden tweeted that picture of you with your hands cupped above her breasts on a flight home from the 2006 USO show. I was incensed. That picture, a #metoo grenade, spammed the nation before lunch. Standing over a sleeping woman with your hands poised to ring her breasts is an aggressive act no matter what the intention.

What if there hadn’t been a picture? What if Tweeden had only a hazy memory of something happening? What if she had heard about it from someone else? Would you have recollected things differently or remembered it at all?

I decided to chase the story a bit. In November 2017, the New York Times reported that 68 high profile men had been accused of sexual assault. By December, USA Today reported that that number had risen to 100. What began in October with Harvey has turned into a fierce campaign to change a bad norm. The one where some men think that they can do what they want with women with little or no consequences.

I found Tweeden on Instagram and checked out her public persona. There’s a picture of her with Hugh Hefner at the Playboy Mansion posted after Hefner died, “RIP Hef.” You’ve probably been to the Mansion too. There’s a video of Tweeden on Twitter introducing Robin Williams at the 2004 USO show. She hugged him, wrapped one of her long legs around his waist, and slapped his ass as she handed him the microphone. Note, Williams was wide awake at the time. The fact that Tweeden was named one of the “Top Hooters Girls of All Time” (in 2008) doesn’t mean that it is open season on her breasts.

I went to Jewish summer camp. Did you? Did you participate in raids when other campers were in color-war? Did you steal bras and run them up the flagpole? Did you chase the girls while making squeezing gestures with your hands? Breasts are not oranges or stress toys.

I was glad that you called for a Senate Ethics Investigation. Then, more women came forward alleging that you forced wet kisses on their mouths, grabbed their asses, cupped a breast, and even asked a woman to join you in the bathroom. How do we reconcile the reports of your accusers and your vague recollections? Yes, I know that there were many women who came to your defense. Yet in this equation, without an investigation, those women do not cancel out your accusers.

I don’t believe all women when they say it happened. I don’t believe all men when they say it didn’t. My friends’ young-adult daughters tell me to believe women who come forward with accusations of rape or misconduct. They tell me that women are treated heinously when they do come forward as if I do not know this. (That problem should be fixed immediately. And, you should work on that in the extra time you have.)

I think about Jaime T. Phillips, who baited The Washington Post with a made-up story about Judge Roy Moore of Alabama, the pedophiliac failed Republican candidate for the Senate a few months ago?  Phillips said that Moore got her pregnant when she was in high school. That he drove her to Mississippi for an abortion. Thankfully The Washington Post did their research. While I contend that Phillips is not all women, she represents some women.

You are not Roy Moore, Harvey Weinstein, Donald Trump, Rob Porter, Bill Cosby, Matt Lauer, to name just a few, which is why I am writing to you. When I heard of your resignation, I was furious.

Twenty minutes after Tweeden’s #metoo announcement on Twitter, a series of stories were launched by Infowars, Breitbart, and The Hill. Many of the articles were too lengthy to have been written that morning. A few clicks and I discovered that Rodger Stone, a conservative political attack-dog, and Rob Dew, director of bullshit at Infowars, had separately predicted your sexual misconduct one day earlier.

While some of your accusers could be lying, you have yourself admitted to being a warm and affectionate guy. Based solely on the Tweeden picture, I feel it’s safe to say that you have demonstrated a lack of decency at the very least. May I suggest a discreet electro-shock collar that goes off when you are in someone’s bubble space if you can’t get your warm and fuzzies under control?

I am rambling. I’m not saying that you did or didn’t do what you say you didn’t do or recall differently. By stepping down you sacrificed due process for yourself and others. I know there was pressure. Can we just admit that you are not the only man in congress who has made some questionable moves? I wish we could zap you all with truth-inducing rays that would turn you Trump orange if you have ever pushed anyone into an unwanted sexual encounter. Getting rid of you (this way) does not rid us of the problem.

Do you feel ill-used? Vulnerable? Mistreated? These are the feelings that abused women contend with. Deal with it. Here’s my advice: Face your embarrassment and shame head on. Get back to work doing the work you do well. Work on behalf of women and children to stop sexual harassment, abuse, and trafficking. Lead other men in these days of change. Show us what being a decent man who messed up or may have messed up or recalls things differently looks like.