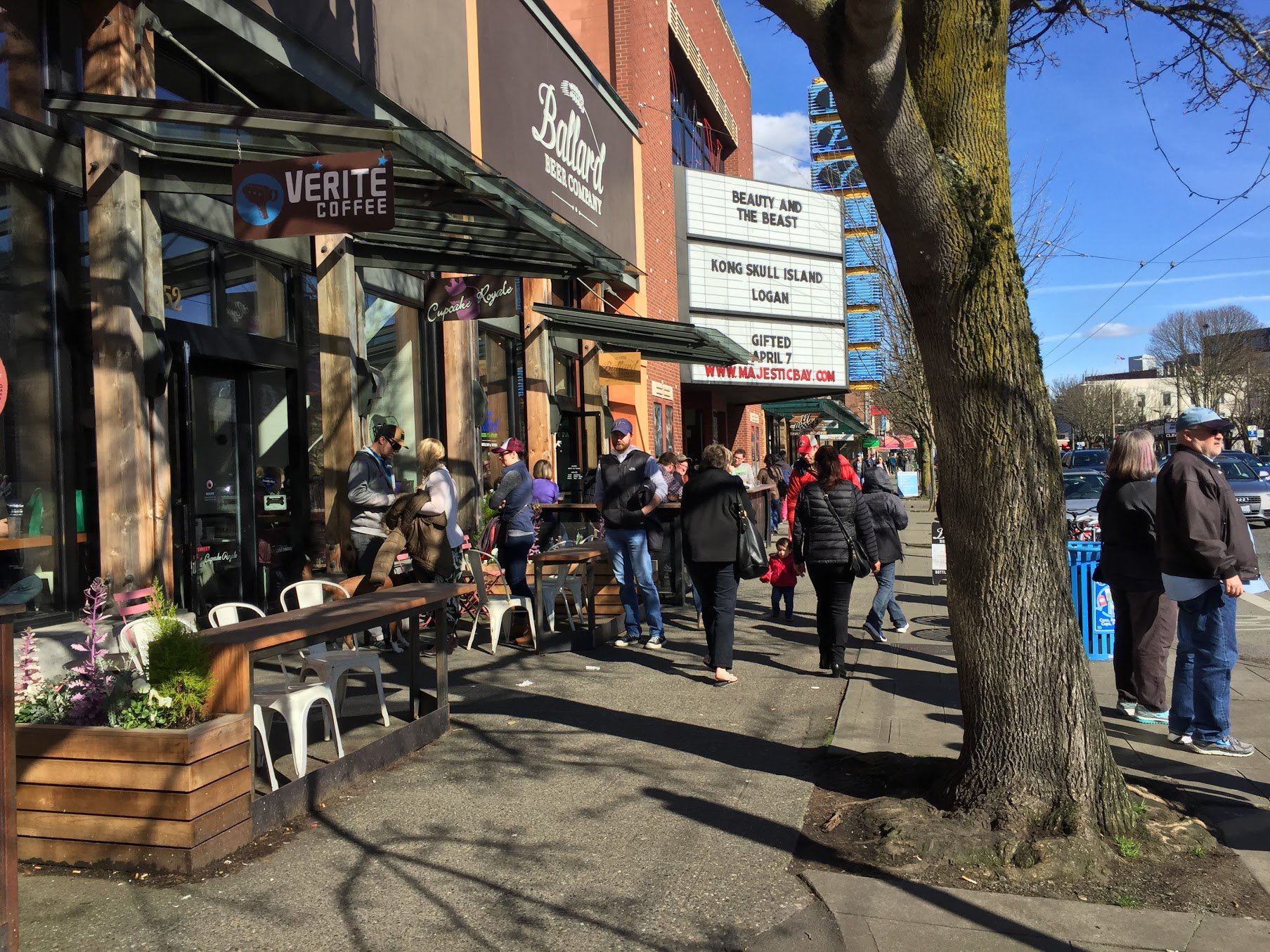 (A transcription of a ‘talk’ given 3/10/18 at the Couth Buzzard’s event “Imaging Worlds: Ursula K. Le Guin Tribute Cabaret”)

Several years ago, I read an interview with
the late Ursula Le Guin that made an impression on me—
in it, she described a defining moment of her very early career.
It seems, after a long stream of rejections,
She received notice by mail of 2 acceptances in one day!
The envelope for acceptance number one contained her payment—
2 contributor’s copies of a poetry journal.
The other envelope, sent by a pulp sci-fi magazine,
Contained a check for 200 dollars.
From that moment, Ms Le Guin intimated,
she knew in which direction
the main focus of her writing efforts pointed.
Or words to that effect—I’m pretty sure she didn’t do
anything crass like jump on a table and scream
“I have seen the future—and poetry ain’t it!…

Look, we’ve been doing these shows at the Couth
for a few years now, and looking out at your faces,
it’s pretty much a regular crowd, even if I don’t know all your names—
I mean, there’s no Outsiders here tonight, right? No squares. No narcs.
Because, after all this time, I don’t think
there should be any lies between us, any false pretenses…

And, just as an observation, I notice that three-quarters of my fellow performers
Who are regulars at these little soirees have acts based on playing
Handcrafted wooden instruments while singing tunes based on
the musical tropes of Appalachian hill folks over two centuries ago,
so perhaps I’m not alone—but I’m not here to ‘out’ anyone
or put anybody on the spot, this is just about me.
Because, you know, I tried to like it…
When I was a boy, I read the Jules Verne novels,
because who wouldn’t want to be Captain Nemo
and wreak horrible vengeance on his enemies?—
And then, wanting to get more bang for my buck
than a skinny comic book afforded, I used to buy
those dime-store Doc Savage paperbacks every Friday night
at the local barbershop until, after about thirty of them,
they started to get a little “same-y.”
When I was 12, I actually read Stranger in a Strange Land,
of which I remember nothing
except for the fact that the extra-terrestrial
who was the title character could apparently
make women have orgasms merely by kissing them,
a piece of sexual misinformation that adversely affected
my personal relationships for a good 30 years thereafter,
but we don’t need to get into that now.
It all ended when I was 19, and spent my evenings
at the Sambo’s on Ocean Ave. & Pico in Santa Monica
reading the Dune trilogy—it only cost two bucks
to get the half-dozen ‘silver dollar pancakes’ platter and a cup of coffee
with endless refills because the waitresses felt sorry for me
as I sat there for 4 hours a night after work because I didn’t want
to go back to my wino/junkie LA roominghouse apartment…
and I NEEDED that time to get through
all 18,000 pages of that book,
because that was back in the day when I thought
if you started a book you were morally obligated to finish it—
anyhow, when I finally got to the final non-ending of that New Age,
pseudo mystic-metaphysical-religious sexed-up proto-fascist piece of tripe,
I hurled it across my plate,
where it landed in a puddle of boysenberry syrup,
and screamed “NEVER AGAIN” — A vow I’ve kept to this day.

That was winter ’77-’78, a year that sticks out
in my mind because that was when
SCIENCE-FICTION KILLED THE
LAST GOLDEN ERA OF THE AMERICAN CINEMA.
I mean, I’m thinking of when we were in high school
and the cornucopia of riches offered then—we could choose between
Midnight Cowboy, Taxi Driver, Harry & Tonto, One Flew Over the Cuckoo’s Nest,
The Long Goodbye, Young Frankenstein, Chinatown. Sleeper,
Monty Python & the Holy Grail, the Godfather movies,
Pat Garrett & Billy the Kid—this list goes on.
But NO—George Lucas and Steven Spielberg and those dumb-ass
Superman movies had to ruin it for everybody,
and suddenly the template changed and nobody
wanted to make a movie unless it was a blockbuster
aimed at the sensibility of a nine-year old boy.
I mean, I found myself in Ballard a few months back
with a few hours to kill, and I never got to the movies anymore,
but I thought, oh what the hell, there’s gotta be SOMETHING to see
and looked up at the Bay Theater marquee—
3 Marvel Comics movies, the new Star Wars,
the 27th installment of Peter Jackson’s The Hobbit
and Boss Baby.
I remember the Bay as a one-story brick third-run joint
that smelled vaguely of rancid popcorn oil and wino piss
where 30 years ago I saw a re-issue of Pinocchio—and speaking of that,
I’m reminded of one of the great wino-piss theaters in my life—
Jeffrey Robert, maybe you can bear me out on this—
The Strand, on Market between 7th & 8th in San Francisco.
Part Cinémathèque Française, part skid row hotel,
it opened from 2 o’clock every afternoon ‘til midnight,
cost about 2 bucks to get in, had a different double-feature every day,
mostly art-house stuff—I would call in sick to work,
stuff a 40 of Olde English 800 and a package of Buddig lunch meat
in my peacoat, and lord, the films I saw!
I saw Pasolini’s Salo there, Children of Paradise,
Orphée, The Three-Penny Opera, Andy Warhol’s Bike Boy & Nude Restaurant—
I actually saw Polyester there when the distributor sent up
boxes of the remaindered ‘scratch and sniff’ cards from the original run—
I may still have one buried away somewhere…
Anyhow, I loved the Strand.
Sometimes, I passed out there, too, just to fit in,
although to the best of my knowledge I never actually
urinated on myself—I didn’t need to!—
Countless generations that had been in my seat before had that covered!
And where are places like the Strand and the old Bay Theater
today, you may ask? I’ll tell you where they are—
They’re gone. Gentrified into extinction by
Google & Microsoft & Netflix & Amazon & Snapchat
and now, for instance, if you ever felt a need
to gather all the grandkids together
and force them in a room and try to
explain to them about wino-pee skid-row hotel
movie palaces and how they were once
the repository of worldly art & culture,
well, they’ll just sit there
and look up at you
as if you were crazy…

But I digress.
What were we talking about?

Oh yeah—Ursula Le Guin.
I know that some of you are all, like,
“Oh, but Ursula’s not like that! She’s all about
ecology & saving the planet & anarchism & overthrowing
the capitalist system and she’s into the Tao and everything…”
Look, I spent over a decade working for the largest used bookstore
in Washington State (they took the title after Shorey’s gave up the ghost
at the turn of the millennium)—Tacoma Book Center.
They have half a million books—
200,000 in the main story, 100,000 internet-only stock in the basement,
and another 200,000 moldering in storage.
The science fiction section takes up two sides of a 60-foot long aisle
with 10-foot high shelves. And Ursula Le guin has her own little shelf
with her own nametag and everything, a befits a “major” writer,
with stacks of those late ‘60s-early’70s mass market paperbacks
with the art-nouveau, William Morris-style covers done in subtle earth tones.
You know, in all my time working there, I can’t recall
ringing up a sale on a single one of her titles.
On the other hand, I got folks lugging plastic bushel baskets filled with
the Warhammer 3000 series or David Drake’s odes to
futuristic para-military imperialism that we can hardly keep on the shelves
what that they’re so popular—and take it from me,
those customers were our literati!—
because this was the same period of time when the YA boom hit
and truckloads of this crap would come in every day—
I couldn’t even shelve them, I would just shovel them
into the aisles like coal and people would swim around in them
like the plastic ball pit in McDonald’s Playland—
don’t get me wrong, I mean, some of these YA novels are great,
well-written with important themes and all—
but it seemed like the majority of the stuff I was shoveling into the aisles
were science fiction stories where you take the pesky science out,
add a bunch of goth kids and call it “steampunk.”
Also, people, come on, the “Y” in YA stands for “Young.”
They put the “Adult” there to make the kids feel grown-up,
but really, after junior high school
you’re really supposed to raise the bar on the literacy thing—
but now, I’ve got grown-ass people who do nothing but read YA novels.
“Our Book Club is doing Twilight this month? Do you have 35 copies?”
Jesus, Christ, god forbid you should rachet it up a notch
and cover Dostoyevsky or something…
And don’t even get me started on graphic novels—
You know what a graphic novel is?—
It’s a comic book that costs 23 dollars and 95 cents!
And everybody made such a big deal last year
when we finally got tapped to be a
UNESCO City of Literture, but I’m reading
the Seattle Review of Books and two-fifth’s of
their weekly coverage is YA & graphic novels.
And the other 3/5ths is goddamn memoirs—
What the fuck is up with those things?
You know who should be writing a memoir?
Albert Schweitzer. Madame Curie. Frederick Freaking Douglass.
You know who shouldn’t?—Ordinary schlubs
like you and me who muddle through and screw up
our non-descript lives in just getting by like 8 billion
other people who suddenly decide
“OMG, my story MUST BE TOLD”
and so they sign up for an eight-hundred dollar workshop
at Hugo House where the instructor teaches them to
forcibly graft a social media hot button topic on
their otherwise faceless tale on non-entity so a publisher
can ship it to my local bookstore’s display table where
I’m supposed to look at it and say “At last, someone has given a voice
to the same boring universal themes that make existence so pathetic”—
Well, I don’t think that, no!—
I’m thinking, there but for the want of 800 bucks
for a Hugo House workshop would have been
MY mug on the cover of that book, and
how unfair is that?
And, as far as I’m concerned, it was those damn memoirs
that led to Reality TV!—

Look, I don’t want it to seem like
I’m some sort of crank.
I’m willing to admit I could be all wet about this.
I mean, I’m willing to concede that 2 million years from now,
when aliens land on the charred rubble of what was
once our planet, and they’re trying to reconstruct
the story of our civilization from the wreckage,
that maybe they won’t be going
“Wow, Gilligan’s Island was exponentially so much better
than Duck Dynasty.”
But, what I do know is that, fifty years ago,
you could turn on the radio and hear
Janis Joplin and Grace Slick and Otis Redding
And today it’s Taylor Swift & Katy Perry & Justin Bieber…