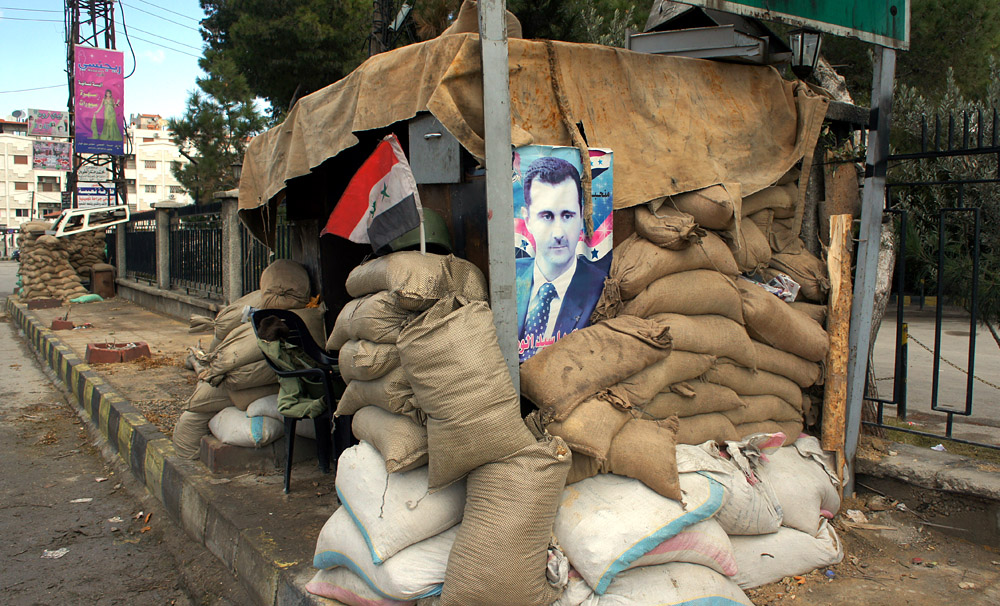 Once more the western ‘anti-war’ movement has awoken to mobilise around Syria. This is the third time since 2011. The first was when Obama contemplated striking the Syrian regime’s military capability (but didn’t) following chemical attacks on the Ghouta in 2013, considered a ‘red line’.

The second time was when Donald Trump ordered a strike which hit an empty regime military base in response to chemical attacks on Khan Sheikhoun in 2017. And now this past weekend, as the US, UK and France took limited military action—targeted strikes on regime military assets and chemical weapons facilities—following a chemical weapons attack in Douma which killed at least 34 people, including many children who were sheltering in basements.

The first thing to note about the three major mobilisations of the western ‘anti-war’ left is that they have little to do with ending the war. More than half a million Syrians have been killed since 2011. The vast majority of civilian deaths have been from conventional weapons, and 94 percent of these were killed by the Syrian-Russian-Iranian alliance. There has been no outrage or concern expressed for this war, which followed the regime’s brutal crackdown on peaceful, pro-democracy demonstrators. There’s no outrage when barrel bombs, chemical weapons and napalm are dropped on democratically self-organised communities, or target hospitals and rescue workers. Civilians are expendable; the military capabilities of a genocidal, fascist regime are not. In fact, the slogan ‘Hands off Syria’ really means ‘Hands off Assad’, and support is often expressed for Russia’s military intervention. This was evident this weekend at a demonstration organised by Stop the War UK, where a number of regime and Russian flags were shamefully on display.

This anti-war left exhibits deeply authoritarian tendencies, that place states at the centre of political analysis. Solidarity is therefore extended to states, who are seen as the main actor in a struggle for liberation, rather than oppressed or underprivileged people. Blind to the social war occurring within Syria itself, this left views the Syrian people—where they still exist—as pawns in a geopolitical chess game. They repeat the mantra ‘Assad is the legitimate ruler of a sovereign country’. Assad—who inherited a dictatorship from his father and has never held, let alone won, a free and fair election. Assad—whose ‘Syrian Arab Army’ can only regain the territory it lost with the backing of a hodgepodge of foreign mercenaries and supported by foreign bombs, and who are fighting, by and large, Syrian-born rebels and civilians.

How many would consider their own elected government legitimate if it began carrying out mass rape campaigns against dissidents? It’s only the complete dehumanisation of Syrians that makes such a position even possible. It’s a racism that sees Syrians as incapable of achieving, let alone deserving, anything better than one of the most brutal dictatorships of our time.

For this authoritarian left, support is extended to the Assad regime in the name of ‘anti-imperialism’. Assad is seen as part of the ‘axis of resistance’ against both the US Empire and Zionism. It matters little that the Assad regime supported the first Gulf war, or participated in the US’s illegal rendition programme where suspected terrorists were tortured in Syria on the CIA’s behalf. The fact that this regime probably holds the dubious distinction of slaughtering more Palestinians than the Israeli state is constantly overlooked, as is the fact that it’s more intent on using its armed forces to suppress internal dissent than to liberate Israeli-occupied Golan.

This ‘anti-imperialism’ of idiots is one which equates imperialism with the actions of the US alone. They seem unaware that the US has been bombing Syria since 2014. In its campaign to liberate Raqqa from Daesh all international norms of war and considerations of proportionality were abandoned. Over 1,000 civilians were killed and the UN estimates that 80 per cent of the city is now uninhabitable.

There were no protests organised by leading ‘anti-war’ organisations against this intervention, no calls to ensure that civilians and civilian infrastructure were protected. Instead, they adopted the ‘War on Terror’ discourse, once the preserve of neo-cons, now promulgated by the regime, that all who oppose Assad are jihadi terrorists. They turned a blind eye to Assad’s filling his gulag with thousands of secular, peaceful, pro-democracy demonstrators destined for death by torture, while releasing militant-Islamists from prison.

Similarly, the continuing protests in liberated areas in opposition to extremist and authoritarian groups such as Daesh, Nusra and Ahrar Al Sham have been ignored. Syrians are not seen as possessing the sophistication to hold a diverse range of views. Civil society activists—including many amazing women—citizen journalists, humanitarian workers are irrelevant. The entire opposition is reduced to its most authoritarian elements or seen as mere conduits for foreign interests.

This pro-fascist left seems blind to any form of imperialism that is non-western in origin. It combines identity politics with egoism. They view everything that happens through the prism of what it means for westerners—only white men have the power to make history.

According to the Pentagon there are currently around 2,000 American troops in Syria. The US has established a number of military bases in the Kurdish-controlled north for the first time in Syria’s history. This should concern anyone who supports Syrian self-determination, yet it pales in comparison to the tens of thousands of Iranian troops and Iranian backed Shia militias which are now occupying large parts of the country, or the murderous bombing raids carried out by the Russian air force in support of the fascist dictatorship.

Russia has now established permanent military bases in the country, and has been handed exclusive rights over Syria’s oil and gas as a reward for its support. Noam Chomsky once argued that Russia’s intervention could not be considered imperialism because it was invited to bomb the country by the Syrian regime. By that analysis, the US’s intervention in Vietnam was not imperialism either, invited as it was by the South-Vietnamese government.

A number of anti-war organisations have justified their silence on Russian and Iranian interventions by arguing that ‘the main enemy is at home’. This excuses them from undertaking any serious power analysis to determine who the main actors driving the war really are. For Syrians the main enemy is indeed at home; it’s Assad who is engaging in what the UN has termed ‘the crime of extermination’. Unaware of their contradictions, many of the same voices have been vocally opposed—and rightly so—to Israel’s current assault on peaceful demonstrators in Gaza.

Of course, one of the principal ways imperialism works is to deny native voices. In this vein, leading western anti-war organisations hold conferences on Syria without inviting any Syrian speakers.

The other major political trend to have thrown its weight behind the Assad regime, and organise against the US, UK and French strikes on Syria is the far right. Today, the discourse of fascists and these ‘anti-imperialist leftists’ is virtually indistinguishable. In the US, white supremacist Richard Spencer, alt-right podcaster Mike Enoch, and anti-immigration activist Ann Coulter have all opposed the US strikes. In the UK, former BNP leader Nick Griffin and Islamophobe Katie Hopkins have joined the calls.

The place where the alt-right and alt-left frequently converge is the promotion of conspiracy theories to absolve the regime of its crimes. They claim chemical massacres are false flags, or that rescue workers are Al Qaeda and therefore legitimate targets for attack. Those spreading such stories are not on the ground in Syria and are unable to verify their claims. They are often dependent on Russian or Assad state propaganda outlets because they ‘don’t trust the MSM’, or Syrians directly affected.

Sometimes the convergence of these two seemingly opposing strands of the political spectrum turns into outright collaboration. The ANSWER coalition, which is organising many of the demonstrations against a strike on Assad in the US, has such a history. Both strands frequently promote Islamophobic and anti-Semitic narratives. Both share the same talking points and the same memes.

There are many valid reasons for opposing external military intervention in Syria, whether it be by the US, Russia, Iran or Turkey. None of these states is acting in the interests of the Syrian people, democracy or human rights, but solely in their own interests. The US, UK and French intervention today is less about protecting Syrians from mass atrocity and more about enforcing an international norm that chemical weapons use is unacceptable, lest one day they be used on westerners themselves.

More foreign bombs will not bring about peace and stability. There’s little appetite to force Assad from power—the action that would contribute to ending the worst of the atrocities. Yet while opposing foreign intervention, one needs to come up with an alternative that would protect Syrians from slaughter. It’s morally objectionable, to say the least, to expect Syrians just to shut up and die to protect the higher principle of ‘anti-imperialism’. Many alternatives to foreign military intervention have been proposed by Syrians time and again, and have been ignored.

And so the question remains, when diplomatic options have failed, when a genocidal regime is protected from censure by powerful international backers, when no progress is made in stopping daily bombing, ending starvation sieges or releasing prisoners who are being tortured on an industrial scale, what can be done?

I no longer have an answer. I’ve consistently opposed all foreign military intervention in Syria, supported Syrian-led processes to rid their country of tyranny, and international processes grounded in efforts to protect civilians and human rights and ensure accountability for all actors responsible for war-crimes. A negotiated settlement is the only way to end this war—but still seems as distant as ever.

Assad, and his backers, are determined to thwart any process, to pursue a total military victory and crush any remaining democratic alternative. Hundreds of Syrians are being killed every week in the most barbaric ways imaginable. Extremist groups and ideologies are flourishing in the chaos wrought by the state. Civilians continue to flee in their thousands as legal processes such as Law No.10 are implemented to ensure they will never return to their homes. The international system itself is collapsing under the weight of its own impotence.

The words ‘Never Again’ ring hollow. There’s no major people’s movement which stands in solidarity with Assad’s victims. They are instead slandered, their suffering is mocked or denied, and their voices either excluded from discussions or questioned by people far away, who know nothing of Syria, revolution or war, and who arrogantly believe they know what is best. It is this desperate situation which causes many Syrians to welcome the US, UK, and France’s action, and who now see foreign intervention as their only hope, despite the risks they know it entails.

One thing is for sure—I won’t lose any sleep over targeted strikes aimed at regime military bases and chemical weapons plants which may provide Syrians with a short respite from the daily killing. And I will never see people who place grand narratives above lived realities, who support brutal regimes in far-off countries, or who peddle racism, conspiracy theories and atrocity denial, as allies.

This essay was originally published on Leila’s blog.