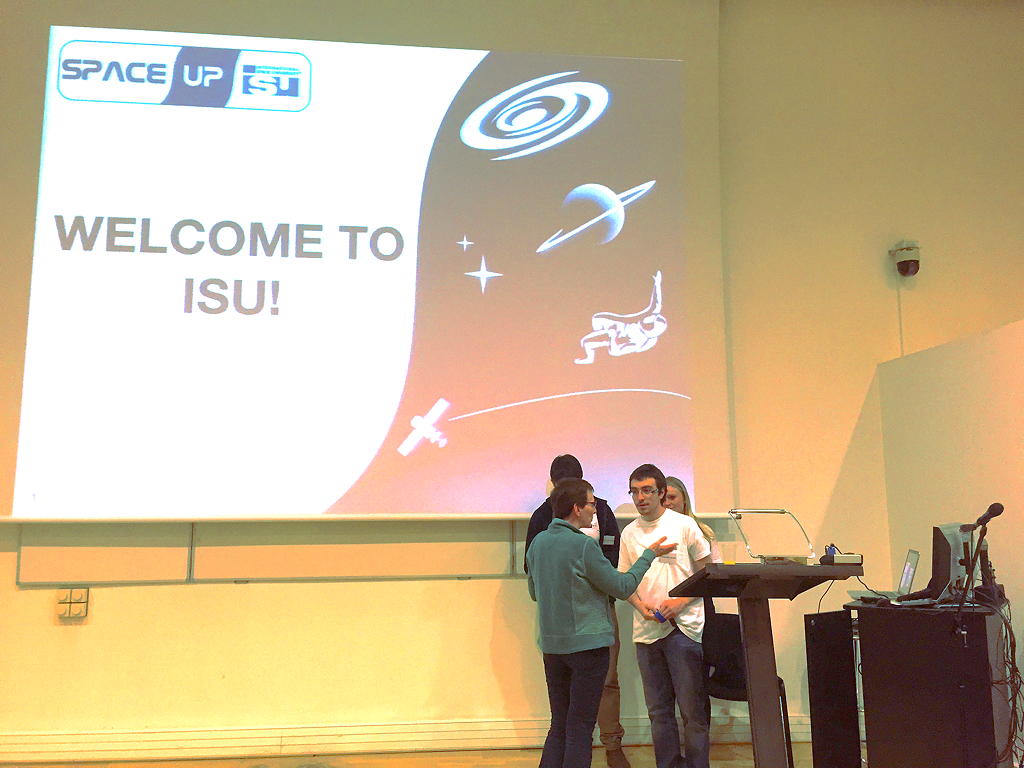 In 2019, space is no longer the final frontier, but already well and truly a realm for exploration and exploitation.

According to the registry maintained by the United Nations Office on Outer Space Affairs, about 20,000 human-made objects are currently in orbit around the Earth, and a hundred more are orbiting other bodies of the solar system.

Eighty nations, or supranational organizations, have launched their own satellites. Purposes of these satellites already cover a wide range of human activities: telecommunications, military surveillance of territories, prevention of natural disasters, scientific research, ecology, and more.

The International Space University (ISU) is a private university founded in 1987, the aim of which is to train future leaders in the exploration and development of space. The author spoke with university president Juan de Dalmau on his efforts to continue his institution’s traditions of interdisciplinary and peaceful development.

Gwenaëlle Lefeuvre: How did an American university decide to establish its main campus in Strasbourg, France?

Juan de Dalmau (JdD) : This was actually decided by the results of a competition. The founders had already decided that the growth of the ISU would be accomplished through a central campus, paired with a network of collaboration with universities around the world.

In the 1990s, a contest was launched to choose the city to host the central campus: Strasbourg was the winner, over other candidate cities from Canada, Japan, Italy, or other regions of France. In an initiative strongly supported by its mayor at that time, Catherine Trautmann, Strasbourg took on the task of constructing a building for the ISU, which would suit the criteria of the university, and for which the funding was already guaranteed.

However, the university has also kept a significant presence in the United States, and thus, a rotating course program returns to the United States once every three or four years. Former students, and a collaborative network of companies in the aerospace industry, as well as NASA [National Air and Space Administration] sponsor courses, or send their collaborators to attend.

GL: Where do your students come from? What do these future space leaders bring in their luggage?

JdD: The master’s degree program in space studies [of 12 or 24 months of study] this year has a class of 45 students, who come from twenty different nations. They bring with them quite a variety of luggage. A bit less than half of the students have had a scientific or technical education, and the other half is more varied: economics, life sciences, medicine, management, architecture or teaching.

From the beginning, the ISU decided to teach by creating connections between disciplines. That was the vision of the founders, who were at that time students in MIT [Massachusetts Institute of Technology]. A vision of multidisciplinary learning.

The program is therefore designed to provide a general culture for everyone. Which is to say, engineers will have to attend basic engineering courses, but through which, they will also have to put themselves in the shoes of a lawyer, or an economist. And that has the additional advantage of putting everyone at the same level for practical work.

For example, our students have to imagine missions for fleets of mini-satellites [cube-shaped space devices as small as 10 centimeters on a side] which can be used for sustainable development initiatives of the United Nations, designed for developing nations.

Today, the International Space University has more than 4,600 former students, and of those, more than 80 percent are working in space industries. From ISU, they have taken with them in their luggage the versatility to work in many different ways, whether it be with other countries, disciplines, or ways of thinking. And in knowing how to find the right person in the right country, due to an informal but well-maintained professional network.

Entities which were at first hesitant, or did not really believe in the ISU, are now the ones who come to us, and want to work with us. This development of our image and our reputation can be credited largely to the accomplishments of our former students.

Thus, in September 2018, we signed a collaboration agreement with the European Commission, which they initiated, that allows us to propose internships to the Commission, to facilitate interventions by Commission officials, to give courses or to enter as participants. Or even to conduct joint space research projects as a tool for dialogue, international cooperation and diplomacy with non-member countries.

GL: What is the attitude of developing countries toward the conquest of space? Can the ISU ensure that they participate fully in the development of their nations through space?

JdD: Space exploration has become much more democratic. A country like India immediately comes to mind, since India has developed its own space technology, without buying it abroad. It has built its own satellites, to monitor its territory in case of natural disasters, and to develop telecommunications in rural areas.

GL: Are you talking about a development of the space industry outside any Cold War context or military application?

JdD: Yes, quite so. We can do a lot of good with civilian satellite programs. More and more developing countries are investing in space technology and education, to avoid buying it. Mexico, Thailand, Nigeria, South Africa, Bolivia and Colombia are implementing programs to benefit their national quality of life. They do not want to “miss the train of space” because space ventures can become a source of well-being and a better quality of life.

GL: How did you achieve women’s enrollment at 40 percent when meanwhile so many industrialized nations struggle to even convince young women to pursue scientific studies?

JdD: This improvement is recent for us as well, but it is the result of many years of efforts and partnerships. One of those is a multi-year agreement with the European Space Agency, which has just been renewed for three years. It allocates funds to give scholarships to the best ESA candidates, in an effort to increase the number of women.

As for my part, it is about years of communication and education at ESA. What is missing are role models for girls to emulate. So we are working with the Irish dollmaker Lottie to develop a collection of “professional” dolls. … [Now] there is Astronomer Lottie, the marketing of this new doll was done by Lottie in collaboration with ESA.

GL: Your mission was founded on the premise of peaceful technological development. How do you navigate current geopolitical tensions?

JdD: When I have to deal with a difficult political subject, I refer again to the credo of ISU founders : “ISU is a place where students and faculty from all backgrounds are welcomed; where diversity of culture, philosophy, lifestyle, training and opinion are honored and nurtured”. And you will note that the words “space” or “technology” were not mentioned therein. That is our philosophy.

I learned a lesson in 1989 when I was studying at ISU: One has to respect the geopolitical facts, but not concede to them. Do not believe that something is impossible when actually, with a little imagination, it is possible.

Our group had imagined a project to build an orbital space station, which would be the research base for the study of physical and biological effects of weightlessness. To prepare for future missions on the Moon and Mars, where the force of gravity is six times and three times lower, respectively, than gravitation on Earth. We had imagined an international station launched from each country, the USA, the USSR, et cetera, and assembled in orbit. Our professor told us that our idea was “very beautiful, but politics always wins”. And then, just a few years later, U.S. President [Bill] Clinton invited the Russians to participate in the International Space Station …

GL: The conquest of space is no longer a purely institutional playing field, with the entry into the scene by private companies, like SpaceX and many others: What is the position of the ISU with respect to the private development of aerospace ventures?

JdD: We are trying to show an evolution in the perception of space. We make a comparison with the way humanity has used the oceans. Similar to oceans, space is a place, not a prerogative of governments, nor of the private sector. If we act responsibly, we can accomplish a lot in space: to do research, and to harness resources that are almost limitless. And, if possible, in a sustainable way (the surface of the Earth receives enough solar energy in two minutes to cover global energy consumption for one year!). But space can also provide an external platform for Earth observation, and can become a destination for space tourism, which will one day be affordable.

We hope that space will not become a space of confrontation. Military defense is not an area covered by the ISU program, although we do invite speakers on the subject.

We are now proposing two-week course modules entitled “New Space”. We are seeing a lot of new businesses that want to do ventures in space, and those are often run by ISU alumni.

GL: Is ISU working to make optimistic science fiction a reality? What is your vision of the future — a permanent colony on the Moon, human exploration of Mars, better use of terrestrial resources …?

JdD: I really like that term, “optimistic science fiction”, that’s really what it is. Space is about dreaming. When you ask an audience “who here knows someone who was fascinated by space when he or she was a child”, 90 percent of the audience raise their hand. Space makes children dream, but so, too, for all of humanity.

In the future? There are people who dream of living permanently on the Moon or on Mars. What is interesting is that, most of the time, their plan intends to reproduce what exists on Earth …

We must maintain the dream! Companies such SpaceX or Blue Origin want to support not just a dozen, but up to a million people, on the Moon. To do this, we will need to inject funds, to build modules, et cetera. These companies are hiring continuously.

Space can also help us to preserve what we have on Earth, and to make the most of it. The two aspects come together: space can help us take care of the Earth. The United Nations started an initiative a few years ago, which aims to see how space can help achieve its 17 sustainable development goals. In education, health, nutrition, disaster prevention, et cetera. To inhabit the Moon in order to preserve the Earth, is a concept that did not exist 10-15 years ago.

Andrew Kowalczuk, a translator for Global Voices, made the introduction between Global Voices and the International Space University. Editor Suzanne Lehn facilitated the interviews. This interview was originally published at Global Voices.