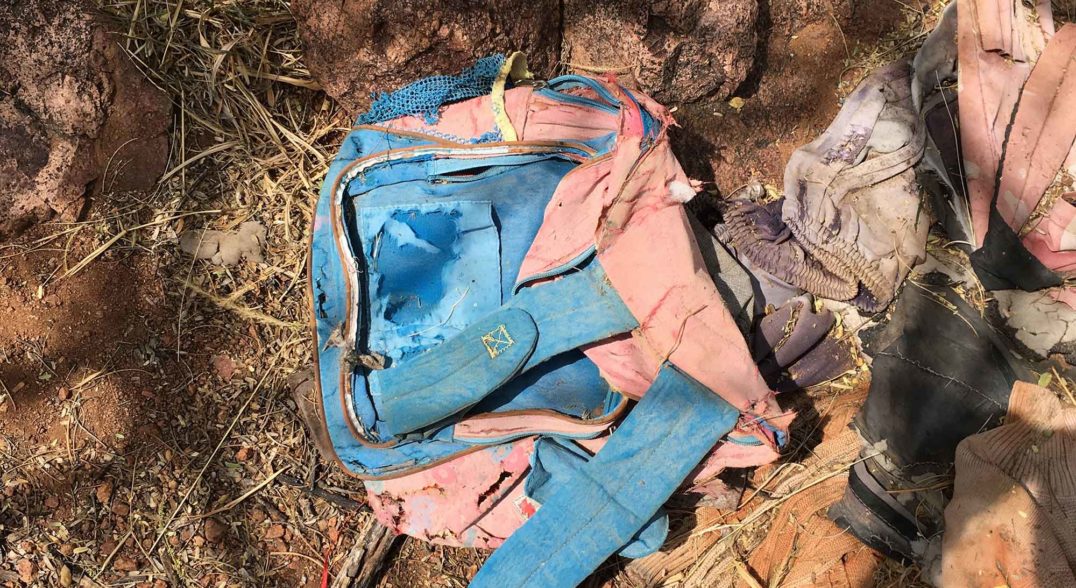 “Oh my God. Did you see this backpack?” a humanitarian volunteer from our group asked as we walked along a migrant trail in the wilderness of southern Arizona. It was a small backpack, decorated with a cartoon figure, left behind and fading alongside the remote trail. A child had probably been here, in this dangerous place. The woman who spoke had been walking along such trails for years as a humanitarian volunteer with the Tucson Samaritans, commonly seeing things like this. But the signs of migrants—particularly vulnerable children—still provoked a response.

Our group of six was walking along a trail in the Tumacácori Mountains for a dark purpose: to leave water jugs for the undocumented migrants making this perilous journey. We knew that there had been multiple migrant deaths in the area due to dehydration-related complications and that the water might help a future migrant, even if we could not see them now or personally hand them the jugs.

I started researching left behind migrant belongings in 2010 when I conducted fieldwork for my master’s thesis. Since that initial research period, the Tucson Samaritans have provided access and insight for me. I worked with them intensively in 2016 and 2017 while doing dissertation research. And I heard the phrase “Oh my God” over and over again as we came upon migrant belongings. We found blankets, used clothing, shoes with holes in the soles, religious objects, children’s toys, votive candles, jewelry, photos, and love letters. People have even come across high heels, makeup, and strollers, as if some migrants were unaware of the difficulty of their journey when they set out. Literally tons of backpacks, water bottles, and food containers get left behind. The accumulations are striking: Sometimes they look like a small village has been struck by a natural disaster.

The Samaritans talked a lot about these lost belongings—things our group encountered along the wilderness trail corridors much more frequently than migrants themselves. We spoke about the prosaic facts of these objects: their age and wear-and-tear, which helped us to determine which paths had been used recently and which ones were now abandoned. More than this, we spoke about the power of these objects—everyday things made into something “more” by their presence in such massive quantities in extremely harsh landscapes. Many times, these things seemed recently abandoned, as if the owner was just around the corner. It provoked a kind of ghostly feeling to be both clearly removed and so intimately connected to the objects’ absent owners, and to never know for sure what had happened.

Since about the year 2000, undocumented border crossings shifted away from less-challenging but more highly patrolled regions and into this remote wilderness. Spaces like the Sonoran Desert—a region encompassing the Tumacácori Mountain range where we walked, stretching across most of southern Arizona to eastern California and deep into northern Mexico—are now sites of concentrated migration, not by chance but by geopolitical design.

The U.S. Border Patrol strategy called “prevention through deterrence,” implemented in the early 1990s, explicitly relied on the physical ruggedness and remoteness of southern Arizona to deter undocumented border crossings as agents mobilized human resources and infrastructure, such as the existing border walls, in urban areas where historic crossings took place. This led to a dramatic decrease in border crossings in these enclosed zones but drastic increases in migration traffic into more remote areas. A push and pull followed as the U.S. Border Patrol continually maneuvered to restrain these new inroads, only to trigger the creation of new ones—a response named the “funnel effect.” Flows of migration gradually funneled from urban zones like San Diego and El Paso into the Sonoran Desert of Arizona. Since the early 2000s, southern Arizona has seen some of the highest numbers of migrant deaths along the border. Migrants apparently are not deterred after all. But they are risking their lives in hazardous terrain.

The landscape here is physically marked by these migrants’ clandestine journeys—by hundreds of miles of networks of newly made trails, by the bodies of those who perished along the way, and by belongings dropped by accident or because they were too heavy or inessential for the journey.

The conversation about the child’s backpack continued as another member of our group responded, “Yeah, but all of this stuff is old.” Looking around, the other backpacks, water bottles, and clothing items strewn along this wilderness trail were visibly faded. They looked like they had been there for some time, not as if they were just dropped. Some people in our group were impatient to carry on, to find more active trails where our water could do some good.

While members of the Samaritans and other humanitarian groups “read” the materials left behind on the landscape to help fulfill their missions of preventing deaths, the left-behind objects are also being systematically removed. Government land managers receive congressional funding to conduct widespread cleanup missions of the “environmental damage” and “landscape degradation” created by undocumented migration throughout this region. Between 2002 and 2015, over 350,000 pounds (175 tons) of migrant belongings were collected and disposed of.

I spoke with many of the people who were involved in this process, and they, too, were often struck by specific objects—compelled to save certain things or moved to let them be. This tension is rarely reflected in the annual reports about these “trash” cleanups, which stick to the aseptic language of weights and measures. But it is there. These objects are variously seen as trash, mementos, and heritage, and they might be all these things at once. I am not sure what we should do about that, whether archaeologists like myself should preserve these materials for posterity by collecting or photographing them. The answers are complicated.

A few miles farther on, our humanitarian group reached the planned waypoint where we intended to leave water. There, we found a number of 1-gallon water jugs from a previous Samaritans’ trip—some full, others empty. We used our best judgment to tally which ones had probably been opened and used by people, and which had been bitten by animals. We counted how many were missing. Some could have been taken by a migrant. Others may have broken open and blown away. Sometimes containers are found slashed, deliberately vandalized to prevent migrants from receiving potentially lifesaving relief on their long journeys. Luckily, that category did not apply this day.

Making our way back to the car, one member of our group pointed out a small cross, a grave marker, in the distance. Another volunteer from the Samaritans had left crosses like this one to mark places where migrant bodies had been found, to help make the extent of the death that occurs here more visible. The crosses incorporated some of the found, left-behind belongings of migrants—mostly food tins—as accent pieces. The marker reminded us that even though it couldn’t be seen, death was around us. The traces left behind, and especially crosses such as the one we stumbled upon, allow us to negotiate the “constant presence of absence,” as the artist and cross-maker Alvaro Enciso describes it, that pervades this migration landscape.

This work first appeared on SAPIENS under a CC BY-ND 4.0 license.