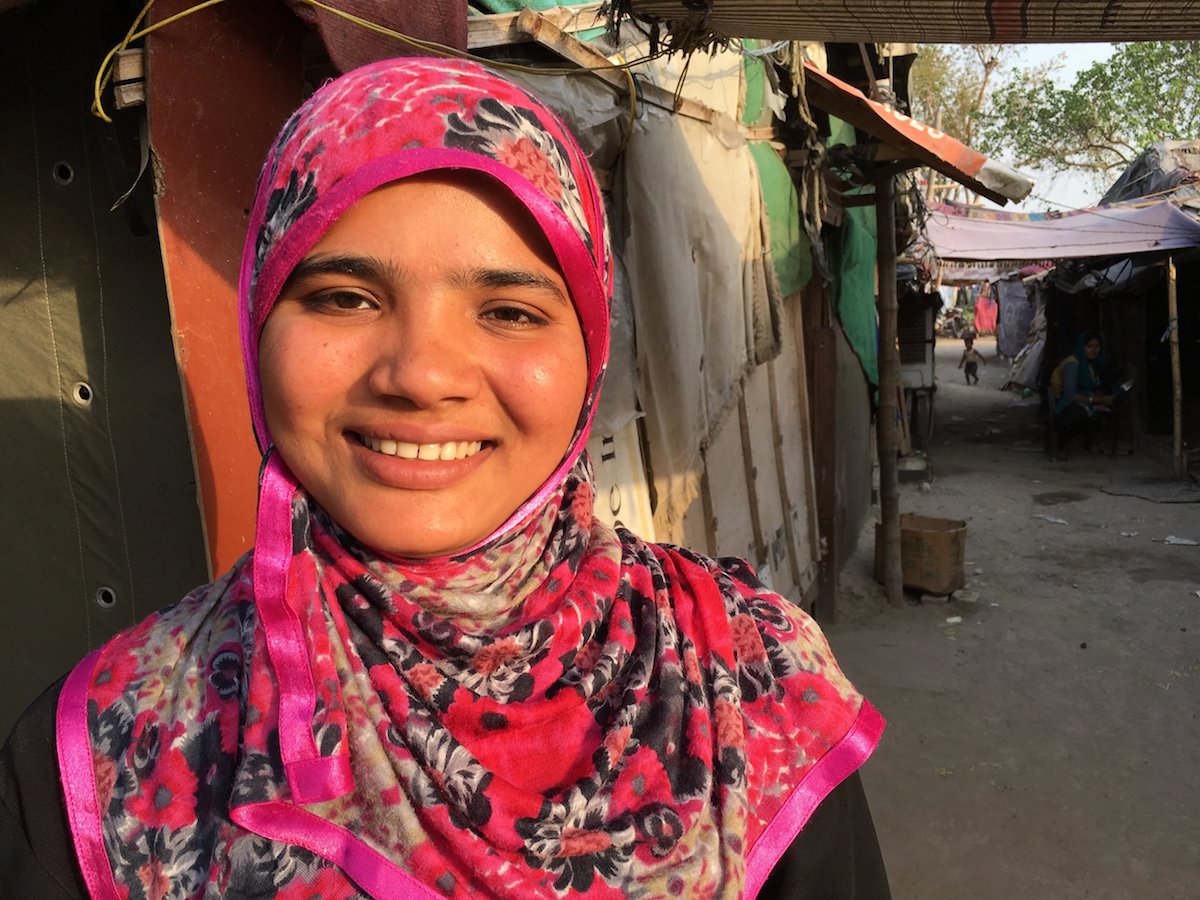 Tasmida stepped out of the shade from a makeshift daily needs shop made of plywood and greeted me with a smile. Her eyes met mine only briefly before turning down to her feet peeking out from her black cotton burkha, her face tightly framed by a bright pink floral hijab.

Curious children looked out from the temporary shacks in the refugee camp, and several women, some with babies on their hips, some crouching on the ground, smiled. Tasmida pointed at each, one at a time.

“She’s my sister-in-law, she’s my dad’s sister, she’s my cousin, this is my niece, he’s my nephew,” she said, and then asked if I wanted to drink water.

None of the women have a formal education. Most married as teenagers.

“In my childhood, I always wanted to be a doctor. Now I want to study law,” she said. “Our situation is not good and the [Myanmar] government is not giving us a voice. I want to raise my voice for our people.”

Tasmida’s already inspiring other refugee girls and young women to study longer and aim higher too.

Her sister-in-law’s sister, Zuhra, a 14-year-old, is studying in class 10. Two other girls have passed to class five and six. One is her cousin’s daughter, who inspired by Tasmida’s example, wants to go to university someday.

“Before, no one was thinking about studying, not even the boys,” Tasmida said. “They needed shelter and had to work for daily wages. Now, people are thinking education is our future… this is our way out.”

But as the rarity of Tasmida’s achievement shows, young Rohingya students have many challenges to overcome to access higher education.

“I am very happy that I’m the first one but I am sad also,” Tasmida said. “There are many students. Why haven’t they gotten higher education?”

The Rohingya have South Asian origin, and ethnically, linguistically and religiously differ from the Buddhist majority in Myanmar. In 1982, Myanmar stripped the Rohingya of citizenship, claiming they are migrants from Bangladesh, even though most Rohingya had lived in the country’s western Rakhine State for many generations.

The ethnic group has existed in Rakhine, formerly Arakan, since at least the 8th century and converted to Islam after contact with Arab traders, which then tied them to Bengal, according to Human Rights Watch. When the Burman king conquered Arakan in 1784, masses of Rohingya fled to Bengal. Many Rohingya moved back to Rakhine during Myanmar’s (then Burma’s) era of British colonization.

In 2018, the United Nations named the Myanmar military’s assault on the Rohingya a genocide and “a textbook example of ethnic cleansing.” The UN’s independent fact-finding mission reported accounts of Myanmar’s military ransacking and burning Rohingya villages, seizing Rohingya land and livestock, kidnapping children for labor, and raping and murdering many.  Nearly a million Rohingya have fled Myanmar since a wave of military attacks beginning in 2012, with as many as 700,000 leaving after the worst spate of violence in August 2017, according to the UN.

State-sponsored discrimination against Rohingya manifests in restrictions on travel, effectively banning businesses bringing goods to markets, like Tasmida’s father’s, who sold fruits and vegetables. The family felt forced to leave because soldiers kept jailing him and demanding money. The discrimination also extends to education, causing 73% of Rohingya in Rakhine to self-identify as illiterate.

Tasmida, her parents and her six brothers left Myanmar in 2005, when Tasmida was just seven, settling in Cox Bazaar, Bangladesh. The Bangladeshi government has now limited the education provided to refugees, in an attempt to discourage Rohingya from coming or staying in the country, and Tasmida was one of the last Rohingya kids to benefit from its government schools.

The Rohingya language is similar enough to Bangla, spoken in Bangladesh and West Bengal, India, and Tasmida enjoyed her classes. Every year, she graduated the top of her class.

In 2012, Tasmida’s family moved to Delhi. Overnight, school – provided only in English or Hindi – seemed impossible. For the next three years, she studied computer literacy, English and Hindi through the Catholic non-profit Don Bosco, which partners with the UN refugee agency. Then in 2015, she returned to formal schooling, in Hindi.

But languages were only part of her challenges. The refugee camp has only dim lights in the evening, making reading at night nearly impossible, and with more than 50 families living there, many with small children who roam freely, there are hardly any quiet moments. She couldn’t stay late at school, because her parents feared for her safety travelling alone past dusk.

“I would go early to school to do my homework, an hour or 30 minutes early,” Tasmida said. “When a teacher was absent, most students would go out to play. I would stay inside and do my homework.”

When Tasmida cleared her class 10 exams, the most important exam for college admissions, people started paying attention. For grades 11 and 12, she earned a spot in a more rigorous school that shares a campus with Delhi’s most prominent Muslim university, Jamia Millia Islamia.

That’s where she hopes to attend college in the fall. Two barriers are left: the tuition fees and a visa.

Since 2015, many Rohingya who apply for a long-term visa in India have been denied. India hasn’t signed the UN’s refugee protocol and decides on cases individually. The Indian government deported seven Rohingya in 2018, following Home Minister Rajnath Singh’s comments that all Rohingya are illegal immigrants and should be deported.

Tasmida and her family are no exception. Although they have UN-issued refugee ID cards – salvaged from a fire last year that burned their home to the ground with many others – that ID is not always accepted by Indian government agencies.

Since Rohingya do not have refugee or asylum-seeker status in India (and India is not a party to international protocol on refugees), Jamia considers Rohingya as foreign students, the same as from any other country, requiring a student visa. The UN is helping Tasmida negotiate her visa status, pending her expected college acceptance in May.

And then there’s the price of college.

Foreign student tuition at Jamia would cost a total $10,800 for three years. A crowdfunding campaign for Tasmida had raised a little more than a quarter of one year’s tuition as of April 23.

“My mom has a gold chain. She said if we don’t raise the money she will sell it and give the money for my fees,” Tasmida said.

When the ladies in the community ask why Tasmida is not married and what she will do after studying— “You have to make food for your husband one day,” they say— Tasmida’s mother encourages her to ignore them and keep studying.

Her brother Ali, in his last year studying political science at Delhi University, has also encouraged his younger sister. It was his friend that started the fundraiser for Tasmida.

Tasmida passes on that encouragement to the kids surrounding her. As I sat outside with her, a three-year-old boy marched up to us. He wanted to tell her about his first day of school.