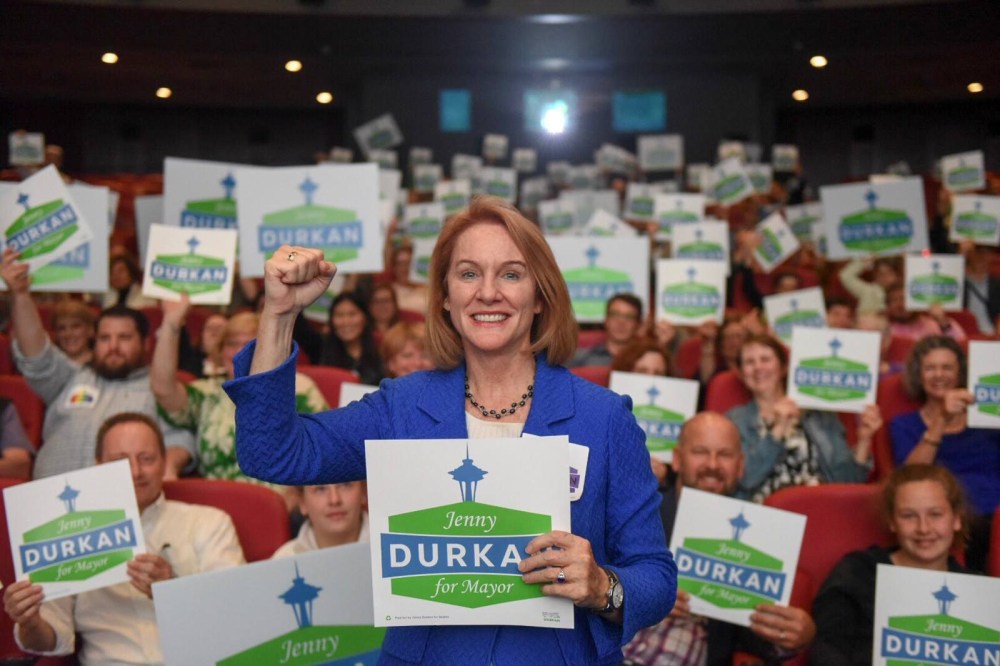 Seattle, we have a problem.

With our latest municipal elections approaching soon and very soon, and our Chamber of Commerce already publicly declaring its intent to financially hijack the process once again for the benefit of the usual gang of local oligarchs, now’s truly the time to know our local political history — especially concerning our municipal establishment’s world-class failure to genuinely solve our city’s intersectionally metastasizing housing-affordability and homelessness crises.

Among those of us who’ve long followed Seattle city politics and government closely, that local policy war was waged long before last year’s absurd battle over the Employee Hours Tax (EHT), a.k.a. the head tax and/or the Amazon tax, whose abrupt repeal was clearly puppeteered by none other than Amazon overlord Jeff Bezos via nominal Seattle mayor Jenny Durkan. Given the feral feel-good fauxgressive rhetoric that’s already bubbling up from the vibrant local discursive slime as next month’s primary elections encroach — your ballots will arrive in your snailmailboxes later this week; watch for them — we’d all be wise to now consider that PACopalyptic municipal episode once more.

Journey — shall we, now? — back to November 2017, when the Seattle City Council convened a task force to consider potential progressive sources of public revenue with which to financially mitigate the crises in question. Seattle’s elite business community, including and especially Seattle Municipal Chamber of Commerce President & CEO Marilyn Strickland, was invited to participate in that noble civic endeavor — but collectively and crucially declined to do so.

After the EHT ordinance was formally introduced by the council on April 20, 2018, that same snowflake-infused big-business cabal soon launched the deceptively-named astroturf committee No Tax on Jobs to fight against the head tax by collecting signatures for a repeal referendum targeted for the forthcoming November 2018 Seattle ballot. When that committee’s campaign flexed its big-money muscle in Seattle City Hall during the following weeks, the Amazon fix was obviously in: the council unanimously passed a compromised version of the EHT on May 14, yet infamously repealed it abruptly on June 12 in a clandestinely organized eleventh-hour 7-2 vote.

One can only wonder today how much genuine opposition to the EHT actually existed within Seattle’s internal political discourse during spring 2018. Signatures from the No Tax on Jobs campaign, although submitted to the Seattle City Clerk’s Office, were never officially counted, and some of the campaign’s paid signature gatherers were caught on audio and video lying to potential petition signers about the actual facts of the tax, falsely claiming among other jive crimes that the EHT had then already taken effect — January 1, 2019, was the ordinance’s actual scheduled launch date — and that it would be directly collected from employees, rather than employers.

After the legendarily contentious council meeting during which the EHT was repealed, council members Mike O’Brien and Teresa Mosqueda provided critical comments to the press concerning the No Tax on Jobs campaign. “What this has proven is that various components of our community have the power to stop things,” said O’Brien. “This is less about the tax, and more about a referendum on the city council, and wanting to unseat council members,” said Mosqueda.

Indeed, our fair city’s infamous longtime political fixer Tim “The Shark” Ceis was a key consultant for the No Tax on Jobs committee. “What do we want?” Ceis reportedly said, according to minutes later leaked to the local alternative press, during an effectively clandestine spring 2018 Downtown Seattle Association meeting concerning the EHT. “A new city council,” was his rascally rhetorical reply.

On June 11, 2019, The Oligarchal Oracle Om-chanted that certain local powerhouse private-sector donors, including and especially Amazon and Microsoft, have pledged $48.8 million to the Seattle nonprofit organization Plymouth Housing Group to help build supportive housing for citizens exiting homelessness. While evidently benevolent, the symbolism of the gesture was rather uncanny, since the gift was announced almost exactly one year after the EHT’s repeal.

Consider now contextually the difference between such performative corporate philanthropy and consistent public revenue that accountable democratically-elected governments can rely upon and plan ahead with on behalf of their constituents. AmaSoft & Friends’ disingenuous gift would only tentatively approach what the EHT would have generated each fiscal year — and even that proposed $48.8 million amount would be significantly less than the $75 million yearly amount proposed by the original EHT legislation. Who’s your true sugar daddy, Seattle?