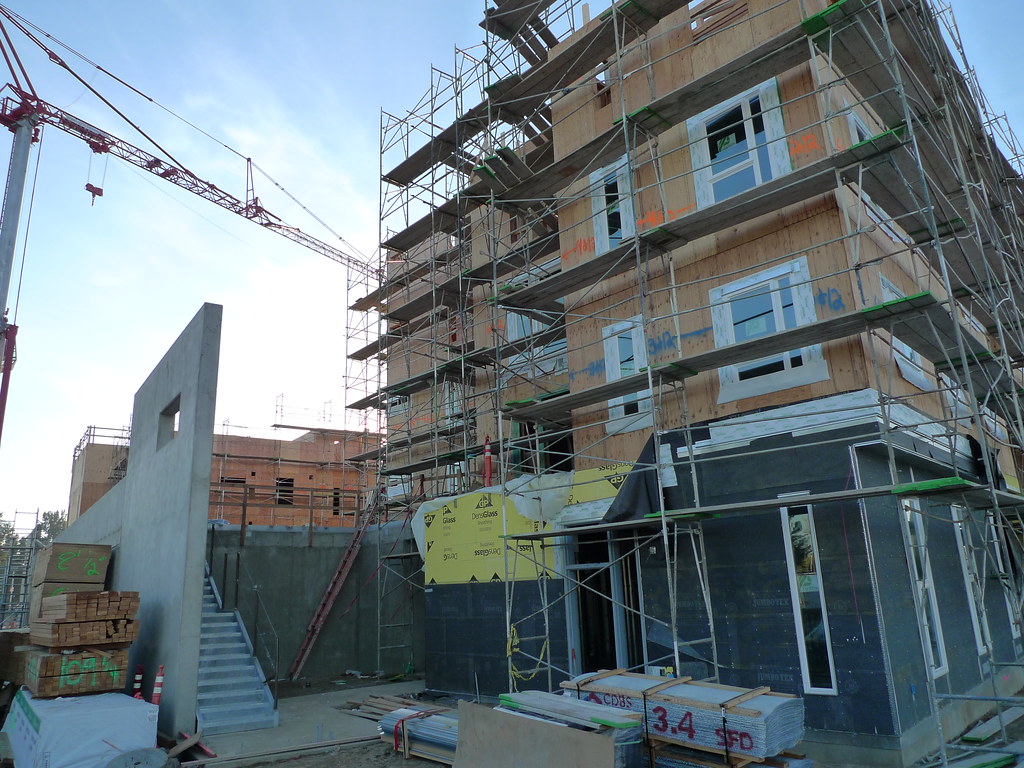 Hey kids! The Word of the Day is… oligopoly. And it helps explain a lot of the dysfunction in America’s cities and towns, such as the widespread shortage of affordable housing in the places with the most booming economies. A new study, by economists Luis Quintero and Jacob Cosman of Carey Business School at Johns Hopkins (as reported by the Washington Post) helps us understand how.

An oligopoly, according to the Oxford English Dictionary, is “a state of limited competition, in which a market is shared by a small number of producers or sellers.” This relative lack of competition gives those few suppliers a lot of power to dictate what choices are—and aren’t—available to consumers.

The classic example in the U.S. context is the broadband internet / TV market. In most cities, there are only 1 or 2, or maybe (if you’re lucky) 3 or 4 internet providers. And for the most part, if you want internet at all, your choice is to accept the terms of the devil on your left shoulder or the (very similar) terms offered by the devil on your right shoulder.

The two questions that Cosman and Quintero’s research attempts to answer are these: Is there an oligopoly in the housing market? And if so, what are its effects?

On one level, housing is obviously very unlike broadband: the vast majority of home sales are of existing (let’s call them “used”) homes, from individual seller to individual buyer. But what about when we restrict our view to new construction? How many different players are involved in building brand new homes in any given city or region? This is where the researchers argue that yes, not only do local new-construction housing markets meet the definition of oligopoly, but the situation has gotten worse since 2006.

In a typical local housing market in 2006 (defined according to “Census-designated places,” which roughly correspond to individual, named cities), only about six development firms accounted for 90% of all new home production. By 2015, according to Cosman and Quintero, the median had fallen by 23% to fewer than five firms. This level of concentration, in most of the 137 places studied, meets a definition of a “highly concentrated” industry that government regulators use for antitrust purposes. (While there are many more major homebuilders nationwide, it doesn’t really matter for what happens in a local market—what matters is how many homebuilders dominate any one particular market. For most people, a house in Albuquerque is not a viable substitute for a house in Ann Arbor.)

The white paper can be found here, and a good, widely-circulated recap of it from the Washington Post is here.

Why Do So Few Developers Dominate Housing Production?

In the aftermath of the Great Recession, the largest homebuilders were in a position to scoop up smaller competitors through a series of mergers and acquisitions. 2009 tax changes also made it easier to use previous years’ tax losses to offset newer gains and avoid being taxed on them—a common tactic which disproportionately benefits large developers with large balance-sheets.

But the truth is, oligopoly in the housing industry is not new. It predates the recession, and its causes include factors more fundamental to the Suburban Experiment paradigm of urban growth and development we adopted, in full force, after World War II. In many ways, our regulatory and financial institutions—in the name of order and efficiency—are rigged to make it as smooth as possible for the biggest developers to deliver a standardized product… while making it costly, uncertain, and challenging to do small-scale and idiosyncratic projects.

Large-scale developers benefit from some inherent economies of scale—they can save money by bringing design in-house and reusing the same blueprints; they can purchase materials in bulk and negotiate better contracts; and they can amass large inventories of raw land and sit on it until the market is right. They often have access to financing at preferable rates because they can absorb significant losses without defaulting.

But local governments are not helpless bystanders to these forces; in fact, they are often complicit in helping entrench the dominance of the big firms. For example, it’s not uncommon for a triplex on a vacant urban lot to receive nearly the same amount of regulatory scrutiny, and endure the same application fee and the same amount of procedural delay, as a 200-unit apartment building or 500-home gated community. Many would-be small-scale developers are deterred by this barrier to entry alone from even attempting to build anything. Add in parking, landscaping, fire sprinklers, facade materials requirements, et cetera, and you have a daunting hurdle for a would-be incremental developer. According to the Washington Post:

The Cosman and Quintero study mentions large developers’ ability to land bank as a factor that encourages oligopoly; post-recession, a company that was in a position to buy cheap land and amass a huge inventory found itself sitting pretty once the market recovered and the timing was right to build on that land. But this kind of speculation, too, isn’t a force of nature. It’s possible because of our tax codes, which make it very inexpensive to sit on unimproved land indefinitely. A land value tax—taxing the raw value of land instead of the buildings sitting on it—would level the playing field by making this kind of speculative behavior much more costly to engage in.

The prevailing mechanism of financing infrastructure, when it comes to developing undeveloped land, is a huge driver of oligopoly. For most of history, cities typically extended roads and services beyond the edge of town in a gradual fashion as needed, expanding on an existing grid. Because this was a costly endeavor, it was necessarily piecemeal. Huge amounts of debt weren’t available to do it in a leapfrog fashion.

Today, a developer looking to build thousands of homes will almost always finance and build all of the public infrastructure up front, handing over the long-term maintenance and replacement obligations to the local government after it’s complete. This gives cash-strapped governments an enormous incentive to court and strike deals with the kind of developer with the pockets to do this. The city  accepts the seeming “gift” of growth now for an uncertain liability down the road.

With all of these factors stacked up, is it any wonder that a handful of companies dominate housing production? We roll out the red carpet for them, and we put obstacle after obstacle in the way of projects that are small, resourceful, experimental—but still require public permission and/or private capital to finance.

Cosman and Quintero produce a model which suggests that deepening oligopoly in the past decade has affected housing affordability—a big deal in an era in which many of the most economically robust cities have the biggest affordability problems.

Data from Zillow suggests that between 2013 and 2017 the average absolute annual change in house prices at the market level was 5.5%. According to our estimates, this would be reduced to approximately 2.4% under 2006 competitive intensity levels.

The lack of competition also results in less supply, which in turn leads to rising prices and affects the affordability of all homes on the market, not just the newly-built ones. Per the Post:

The economists find this dwindling competition has cost the country approximately 150,000 additional homes a year — all else being equal. [Editor’s note: For reference, 857,000 new homes started construction in 2015.] With fewer competitors, builders are under less pressure to beat out rival projects, and can time their efforts so that they produce fewer homes while charging higher prices.

There are major consequences beyond the affordability and economic growth concerns the study cites, as well. Oligopoly in housing construction distorts the very nature of what our cities look like and how they grow, and whether we build places that will hold their value in the long term.

A city in which four or five development firms are producing 90% of the new homes, year after year, is a city in which backroom dealmaking—not uniform rules applied uniformly—easily risks becoming a regular part of the development process. It is a city whose physical form is going to gradually cease to represent any bonafide concept of public preferences, let alone the public interest. Authentic market feedback will not determine what is built so much as the financial interests of the firms that control the market. And home seekers are left with an impoverished menu of choices that doesn’t reflect nearly the full variety of ways we could live or might want to live.

The rapid but decentralized development of Chicago is revealed in this 1876 map: expansion occurred not in finished-state subdivisions, but by building onto an existing grid, opening up land to many small- and larger-scale developers. Image via Wikimedia Commons.

The Case for Cities Built by Many Hands

Brookings Institution fellow Jenny Scheutz lays out the stakes in the Washington Post piece if cities fail to take the lead with policies that will re-enable a world of many incremental developers, not an oligopoly of a few huge ones.

“If zoning and other local permitting processes are complicated, land is expensive, and the time needed to develop a project is long, then only large, well-capitalized, politically savvy developers will be able to build,” the Brookings fellow said.

Zoning and permitting changes alone won’t suffice to fix our oligopoly problem, but they’d be a good first step.

A world built by many hands is a world that’s going to be more responsive to market feedback—we’ll find out quicker what doesn’t work and stop doing it. It’s a world that can offer a broader variety of homes and neighborhoods to meet a broader variety of needs. And it’s a world of cities that can adapt rapidly and organically to unforeseen problems—like, say, an affordability crisis.

Incremental developers built some of our continent’s greatest cities. Think of the rich, varied fabric of the 19th-century neighborhoods of Philadelphia and Boston, San Francisco and Charleston… or Chicago, which went from a town of 30,000 to a metropolis of over a million in only 40 years, 1850 to 1890. These were cities built, often very rapidly, but by many hands. It’s time to stop entrusting the future of our built environment to only a few.

Thanks to Strong Towns.