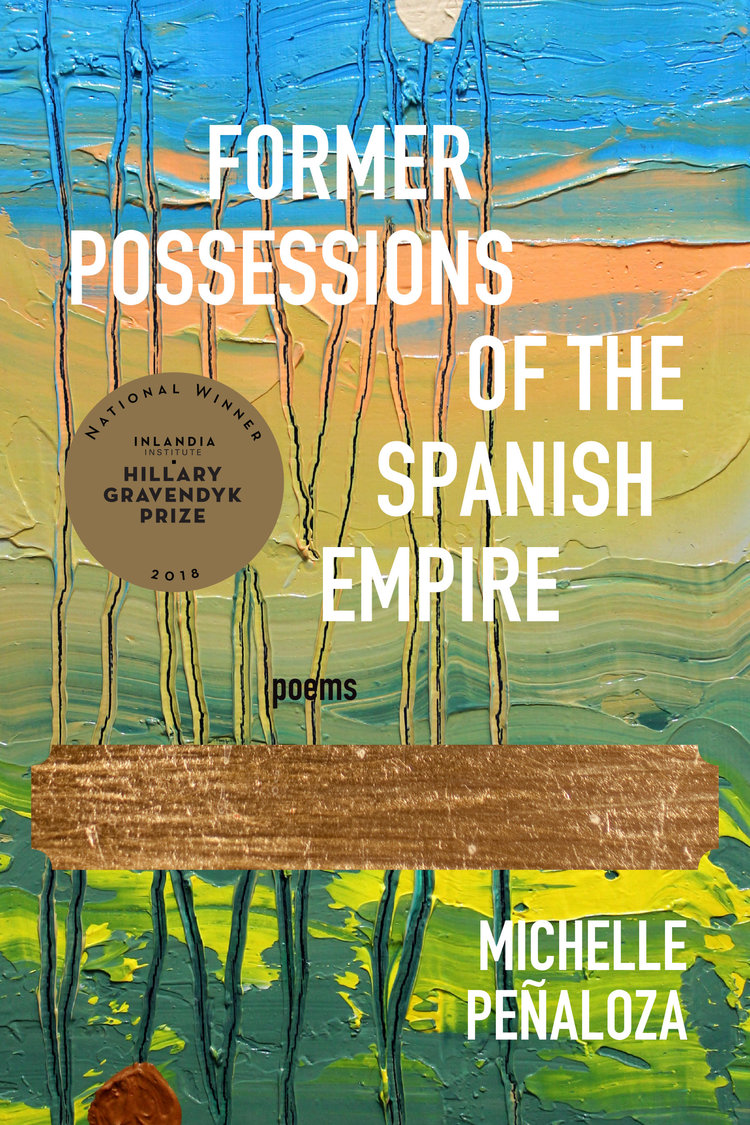 Former Possessions of the Spanish Empire is Michelle Peñaloza’s first full-length poetry book. She is also the author of chapbooks, landscape/heartbreak and Last Night I Dreamt of Volcanoes. In the notes, she says “‘Former Possessions of the Spanish Empire’ refers to Catálogo alfabético de apellidos, a book of surnames published in 1849 after Spanish Governor-General Narciso Clavería y Zaldúa issued a decree to address the lack of standard naming convention, in order for Spain to effectively collect taxes in the Philippines.” Roberto Jamora’s cover artwork, “Ride or Die Chick” suggests land and water, vegetation and gold, a rich place.

Peñaloza split this ninety-two page collection into three sections numbered in Tagalog and English. Most of her poems fit on a page. An exception, the tragic narrative, Magsaysay Drive, Olongapo City: Na Wala Sa Pagsasalin, she divides into seven sections and as many pages. Three works, all titled Q&A and printed white-on-black, punctuate the book with surrealistic/hyper-realistic interviews: “What color was your scream?” (p. 13, Q&A), “Why did you stay?/ My feet were ashen and he hid my shoes; I was too/ashamed to leave the house.” (p. 46, Q&A), and, “Oh, OK. But, where are your parents from?/an acre of fertile land given up to God …the long song of continental drift; a widening ocean away.”

I read the book cover to cover, which poetry makes optional, and found a continuity to the thoughtfulness and its directions—identity, relationships, family. There is confession, dream, and response to elements of Peñaloza’s contemporary life, such as what she is reading. There is heartbreak, history, and frank description.

The poems are personal although some are not in first person. There are truths expressed in second person, “if you were an immigrant child,/nostalgia is your sibling.” (p. 25 Nostalgia Is a Dangerous Thing) or an undisguised, tongue-in-cheek third person, “Would you understand your daughter’s/self-fulfilling prophecies? Her need/for distance, her proclivity for/the third person.” (p. 40 When My Mother was Eartha Kitt).

The personal is also historical, looking back at her own life, her family’s, and her ancestors’, “…many years/of scrying the world for answers…” (p.79, Post Diaspora). Slices of Peñaloza’s heritage—born in the Detroit area—appear in My Father, On the Line (p.59) about a childhood memory of her father touring her through an auto assembly plant, and in Post Diaspora (p. 76 -79) as she describes visiting the Philippines, ancestral home, “I’ve been back to their water (is it mine, too?)/But, wasn’t a good swimmer./Everyone spoke underwater; I could only/hold my breath to listen for so long./ I did learn the water carries its own song.”

The book’s trilinguality is personal. In many of the poems, Peñaloza slips between Tagalog, Spanish, and English. I guessed I might be reading the frequency with which these languages work through the poet’s thinking, that this trilinguality is her present-day experience, “… words humming new dichotomies with every hover and flap–” (p. 16, Late Afternoon with Chagall).

The personal, in certain poems, could not be more intimate. For example, the poet walks us through a sexual encounter in Partial (p. 42) (which terrified me by omitting the word from its pages, which appears in the following poem, Upon Reading Understanding the Filipino (p. 44), “…it is not rape to anyone/but her,” as if to comment on and further contextualize the prior poem).

We Are So Sorry for Your Lost (p. 22) took me into the poet’s actions and thoughts as she grieved the death of her aunt. Simultaneously, I learned, “Instead of flowers our people help/the family pay for the funeral.” Simultaneously, I engaged with the diction considerations that surround the human experience of deaths of loved ones, “Our dead are lost, aren’t they?
/There is always some mistake:/lost down a well, …lost to the world…” Simultaneously, I follow the narrative: “I alone read the short scrawls of sympathy.” Simultaneously, I marvel at the documentation of this English mistake in a condolence note leading the poet into a surprising exploration of the accuracy of, “We are so sorry for your lost.”

Former Possessions of the Spanish Empire gave me the sense of inhabiting a window bench with Peñaloza; she pointing to what and how she saw, her poems asking many questions as if we are in conversation. Peñaloza mulls answers openly. A portion of her collection (7 of the 43 poems) ends with new questions, and mulling their answers falls to us.