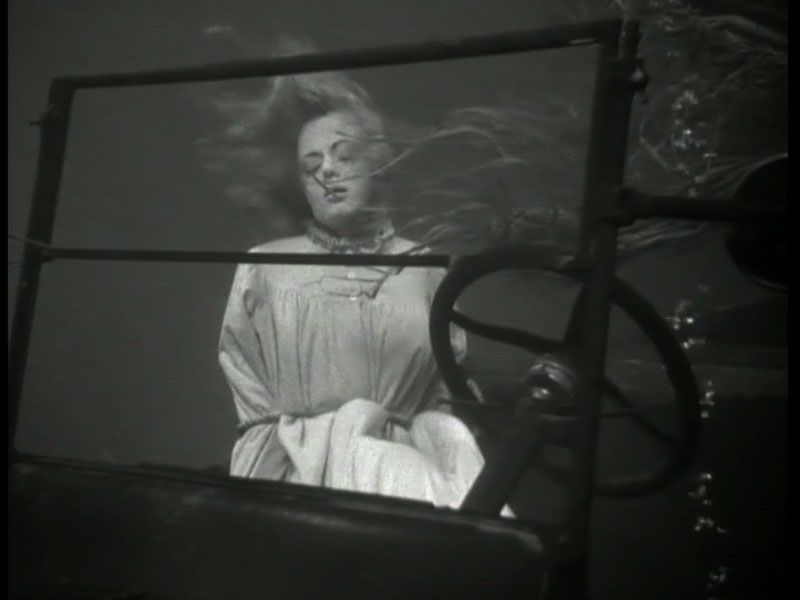 Shelley Winters made her breakthrough in pictures by being strangled to death in the 1947 film A Double Life. She was killed by Ronald Colman who played a deranged actor who couldn’t separate the stage roles he played from real life. Mr. Colman atones for his crime by committing suicide on stage while playing Othello, the role that drove him over the edge. As he lays dying in the wings he relates the story of an old actor named Kirby who was so good at dying on stage that the crowd would demand that he get up and die again. Colman finishes the story by saying “I hope they don’t ask me to die again, because I couldn’t.”

It is more than ironic that Shelley Winters started her career in that film. Eight years later she appeared in the film I Died A Thousand Times. That is also ironic. In her films she did not die a thousand times, but sometimes it seemed like it. No performer in films ever died so well, or died so often, as Shelley Winters. Her next significant movie after A Double Life was The Great Gatsby in 1949. In that one she is run over by a car, driven by her lover’s wife. Well, once is happenstance, and twice is coincidence, but thrice shows a trend. Her third screen death occurred in A Place in the Sun (1951). There was no stopping her now. She would go onto to appear in over a hundred more films and would continue to die in a good percentage of them right up to Heavy in 1995.

It offends me to hear people speak of Shelley Winters and lead with the words camp and kitsch. It is wrong to lump Shelley Winters with Mae West, Annette Funicello, Raquel Welch, and others of that ilk. When an actress appears in 130 movies, and is not afraid of taking chances, the results aren’t all going to be art, or for that matter, even good. She received four Oscar nominations during her career and won twice. She acted in films that were based on books by Henry James, Vladimir Nabokov, Theodore Dreiser, Jean Genet, Lewis Carroll, Anton Chekhov, and other heavyweights. She starred in films that are considered landmark productions, including Night of the Hunter, Lolita, Alfie, and A Patch of Blue. She felt comfortable in a Roger Corman film (Bloody Mama), in Blaxploitation (Cleopatra Jones), in Teensploitation (Wild in the Streets), in a Biblical epic (The Greatest Story Ever Told), in out and out trash (The Chapman Report), and in at least one film hardly anyone has ever seen (Arthur, Arthur).

For the movie Diary of Anne Frank she had to gain thirty pounds to play the doomed Mrs. Petronella Van Daan, one of the other residents of the hidden annex where the Frank family hid for two years before being sent to concentration camps. During the shooting of the film she had to shed the added pounds just as the actual character had lost weight during the confinement. Her first Oscar nomination for best actress was for A Place in the Sun. She was beat out by Vivien Leigh in A Streetcar Named Desire. Katherine Hepburn was a co-loser for The African Queen. That is the sort of company Shelley belonged in.

Now that we have established Shelley Winters was not a one-dimensional actress whose only talent was being cinematically disposable, we can get back to talking about just how good she was at getting killed. Being able to repeatedly bring something new to the singular event that everyone is capable of is not an easy thing to do. If you think about it, only the best performers can die more than a few times on screen in their careers and provide variety. I’m not even considering those performers who specialized in playing bad men in westerns such as Bob Steele and Victor Jory. All they ever did was get shot and fall over dead. About the only variety for many players of that sort is to get hung now and then.

Among actresses it’s hard to find one who has memorably died in more than one film. In the case of Susan Hayward, once was enough. Her one way trip to the gas chamber in I Want to Live is arguably the single greatest female death scene ever. Ali McGraw looked like she might become a contender with her big time death in her third film, Love Story, and then following it up with a possible big death in Jim Thompson’s The Getaway. The snag was the producers decided to change the ending of the book and let the Ali McGraw and Steve McQueen characters cheat the book’s grim reaper and drive off into a happy ending in the film. It was all downhill for McGraw after that. She appeared in fewer than a dozen films after that. Faye Dunaway got off to a great start by dying in a hail of very loud gunfire in Bonnie and Clyde. A few years later she had an eye memorably shot out in Chinatown. After that, nada.

Only one other performer comes close to Shelley’s shuffling off the mortal coil artistry: Jimmy Cagney. In The Public Enemy, his being tied to a board and propped against the door of his mother’s house, falling face forward into her parlor when she answers the doorbell and landing on his face at her feet, set the tone. His stumbling death that covers a couple of blocks in The Roaring Twenties was so good it was basis for a parody on the Carol Burnett show thirty years later. His death at the end of White Heat, “Top of the world Ma!,” attained cult status. Best of all was his walk to the electric chair in Angels with Dirty Faces, where at the last minute he grovels and pleads for his life, so young toughs who adored him will not look at his death as a martyrdom. Shelley was better than that.

An actor whose career followed that arc was Errol Flynn. His film debut was as the doomed Fletcher Christian in the movie In the Wake of the Bounty (1933). From there he went to Hollywood where he died in The Charge of the Light Brigade (1936) and later got the plum getting killed part as General Custer in They Died With their Boots On (1941). For the next fifteen years he swashbuckled through many rolls, but a year before his death in 1959 he took the part of John Barrymore in the film Too Much, Too Soon, where he has to die, as the movie is about Barrymore’s daughter Diana.

Shelley Winters started out in films as one of dozens of blonde bombshell starlets in the 1940’s. In the 1950’s almost all of them were replaced by a new crop of young blondes with nice figures. A good example of Shelley the bombshell is in the completely forgotten 1951 film Behave Yourself.

She knew that roles like that wouldn’t be available all her life. That was the year she got the Oscar nomination for A Place in the Sun. She only got the part by working for it. She dyed her hair brown, bought frumpy clothes like a woman in a factory would wear, and when George Stevens saw her he didn’t even recognize her. She was willing to play needy, whiny, and dowdy. Getting killed was an unplanned bonus.

It is hard with a performer who died so often and so well, to single out performances, but I will try. In the boat scene in A Place in the Sun she is magnificent. She has to move from hopefulness, to loss of hope, to fear. She has to convince her lover not to murder her, and then panic and cause the boat to turn over, insuring her own death. No one could have done it better. In The Night of the Hunter she has her throat slit. Nothing real special about that. The artistry is in the shot of her sitting in the submerged Model T Ford with her blond hair flowing back from her face, her hair being carried by the flowing stream. It is one of the singular most memorable shots in film history. Her death in Bloody Mama is fun, mainly because she gets to die with a Tommy Gun in her hands. Think about it, how many actresses, not just ones who have won Oscars, but all actresses, ever get to get to die on film holding a genuine Thomson submachine gun! Now days lots of actresses run around in films waving all matters of modern automatic weapons. Those weapons don’t have the panache of real machine guns. Finally, The Poseidon Adventure deserves special mention. She really should have won her third Oscar for the role of Belle Rosen. She is at her needy, overweight, and very human best as one of the band of survivors trying to escape from the capsized ship. When they appear to be stopped by a substantial body of water, only Belle’s long unused ability to hold her breath while swimming can save the group. Of course no one believes she has this ability. They, and us in the audience, assume she is fibbing. Now, if you have not seen the movie, you may think I am being silly, but when she does dive down into the water, pass through the submerged doors, and make it to the other side, it is a triumph of great screen acting. After completing the heroic swim she dies. It should have won her another Oscar, except Eileen Heckert, insider favorite, received a career sympathy win for the treacly Butterflies Are Free.

When Shelley Winters died on January 14, 2006, her passing was duly noted, as it properly should have been, sometimes at insightful and gushing length. In no case mentioned was the singular great loss to the movie going public that her death would insure: The movie going public would no longer have new opportunities to watch Shelley die. How could it be that the various writers who are supposed to notice these things failed to mention Shelley’s greatest achievement as an actress? I will state it clearly: No performer, man or woman, in the history of motion pictures, died so often, and so well, as Shelley Winters.