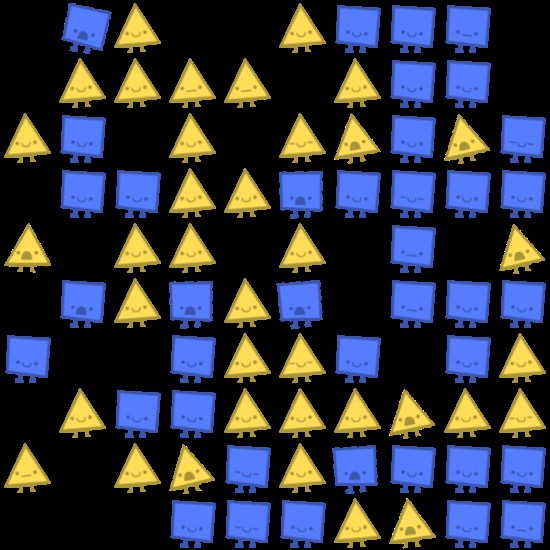 For us here at The Star, the greatest difficulty when talking about social justice and other abstract ideas is just that: they’re abstract. And whenever things remain abstract, intellectual biases simply reduce everything to what is coziest to believe.

Take the much-discussed topic of “racism.” What is it, even? All who propose to talk about it with the supposedly less-enlightened are stuck having to define what they mean. Usually it comes down to some fuzzy idea about history, inheritance, freedom, etc. — ideas which are themselves extremely unclear.

It’s a lot better when discussing “institutional racism” to provide a clear visual of what it means.

Which brings us to this week’s Free Thing, the brilliant Parable of the Polygons.

In Parable of the Polygons an interactive game asks the player to do something very simple: in a world of triangles and squares, move the shapes into “neighborhoods” that obey a simple rule: each shape wants to move if fewer than one-third of its neighbors are similar.

The short version is this: small decisions create large decisions. And when decision is a bias or prejudice, small individual prejudices create great social prejudice. Based heavily on economist Thomas Schelling‘s paper “Dynamic Models of Segregation,” Parable of the Polygons visualizes how that segregation actually works. Not abstractly, couched in fancy language, but directly, visually, simply.

Get busy with Parable of the Polygons here.