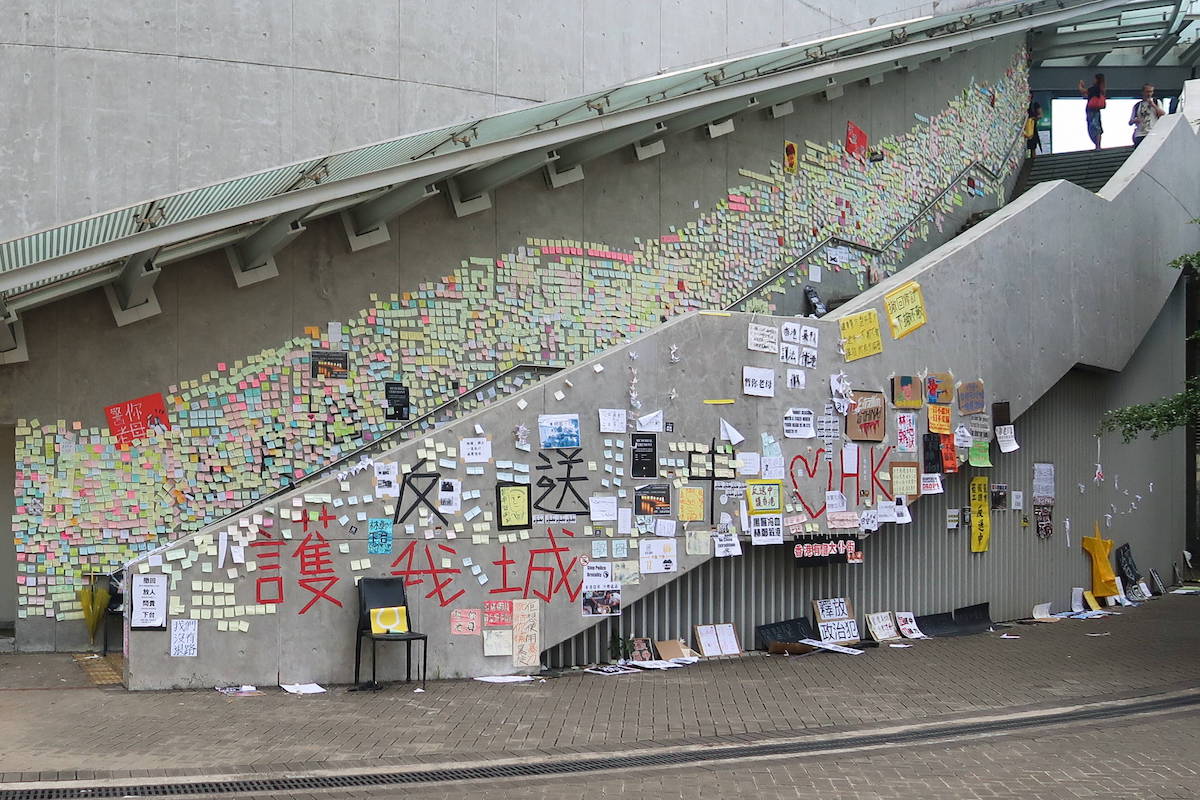 Months of anti-government protests in Hong Kong have physically reshaped the city. As a scholar of urban landscapes, I have been interested in how the citizens and activists made use of the urban environment during the movement, including walls of Post-it sticky notes and other creative displays.

The original Lennon Wall was in central Prague, west of the Vltava River and south of the iconic Charles Bridge. Since the 1960s, the wall had been a location for romantic poems and anti-government messages. After Beatles legend John Lennon’s murder in 1980, someone painted a portrait of Lennon and some of his song lyrics on the wall. In time, messages evoking Lennon’s common themes of peace, love and democracy covered the space. It became a location for community-generated protest art that endures – yet is ever-changing – today.

In Hong Kong, the first Lennon Wall appeared during the 2014 Umbrella Movement protests – named for their participants’ use of umbrellas to shield themselves from police pepper spray. This wall of an outdoor staircase in the city’s Admiralty district, near the Central Government Complex, was covered by handwritten sticky notes supporting the protest. The colorful mosaic became one of the most memorable sights of the movement.

In 2019, as anti-government protests spread throughout Hong Kong, more than 100 Lennon Walls, covered in sticky notes and other creative displays, appeared around the city. Like the rivers of protesters flowing through Hong Kong’s urban canyons, these sticky notes have covered all sorts of surfaces, including storefronts and freeway pillars.

The Lennon Walls in Hong Kong have transformed nondescript walkways, sky bridges and tunnels into spaces of gathering and exchange where ordinary people would pause, read, write, and engage others in conversations. The simple and highly adaptable technique has allowed multitudes of citizens, visitors and tourists to participate in the movement and the political debate.

The messages on the walls are not exclusively in support of the protest movement – one note read “Hong Kong belongs to China,” a view decidedly opposed to many of the protesters. But the community has apparently developed a tacit agreement that people won’t take down or cover over messages they disagree with. The walls themselves have become an exercise in democracy.

Hong Kong’s authorities have removed some of these walls over objections from protesters. However, new notes, posters and other displays reappear in a matter of hours. It’s another way the movement is expressing its motto, “Be water,” signifying that the protesters’ actions should be adaptable, tactical, fast and spontaneous – the way water flows through cracks in a structure.

In November 2016, after Donald Trump’s surprise presidential win, New York City residents used sticky notes to transform a pedestrian tunnel beneath 14th Street into a space of therapy and mourning. Passersby would stop, read, take pictures, add to the collection and come away with a sense of shared emotion.

This spontaneous and collective form of public communication has brought new life to the historical idea of public space as a place for expression, dialogue and assembly, a concept dating back to the Greek agora. Recent examples included New York City’s Zuccotti Park during the Occupy Wall Street protest, and the Puerta del Sol square in Madrid during the 15M Movement where tens of thousands of people gathered to protest against the government’s austerity policy.

Around the world, Lennon Walls have sprung up to show solidarity with the Hong Kong protesters. In New York City, supporters set up temporary, portable Lennon Walls in public parks; there were similar efforts in Seattle and San Francisco.

In Taipei, the capital of Taiwan, supporters created spontaneous Lennon Walls in the tourist-frequented Ximenting area, and inside a pedestrian underpass near National Taiwan University. In Tokyo, supporters at the busy Shibuya crossing intersection became human Lennon Walls, inviting passersby to post messages of support on protesters’ clothes.

By occupying public walls, or at least publicly accessible ones, these Lennon Walls show how ordinary people are reclaiming urban spaces and voices in a political process. Even if sticky notes can’t themselves fuel a revolution, they serve as reminders that people have the collective ability to reinvigorate democracy, wherever they are.

This article is republished from The Conversation under a Creative Commons license. Read the original article.