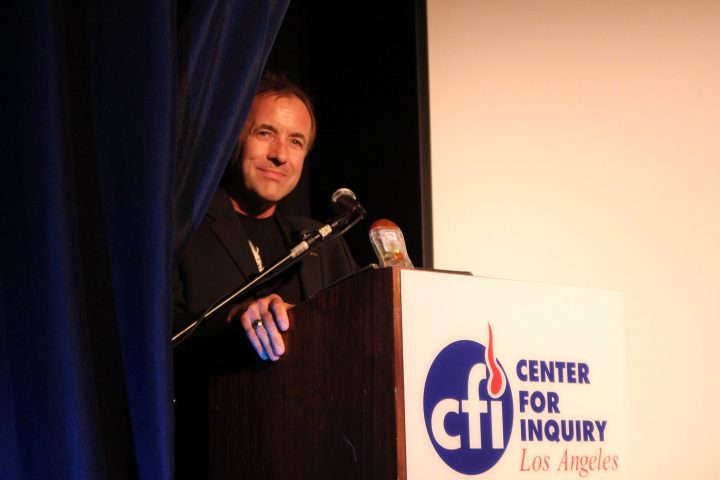 Michael Shermer’s Giving the Devil His Due (Cambridge University Press, 2020) (subtitle: Reflections of a Scientific Humanist) is a very special book written for people that actually spend time “thinking.” Geez, come to think of it, that’s kinda special in and of itself, “people thinking about things.” It’s especially true because nowadays society is geared to the opposite of deep thinking. Rather, in today’s world, quick reflexes attuned to electrical whims rule the day. People increasingly react to impulses, not deep thought, as buttons/apps are pushed to communicate across the room as well as across the world. Presto! So much for deep thought!

Dr. Shermer (Ph.D., Claremont Graduate University), a multiple New York Times bestselling author, provides an outlet for those looking for something more than personally “reacting to impulses, pressing buttons, staring at small screens.” He satiates the innate deep-seated human need to connect with the intellectual intensity of the world, its colors, its odors, its thinkers, its societal norms, and its cultural roots with his crystal clear words. These are themes of the life experience in an increasingly wacky world. Giving the Devil His Due is a book for people that have a thirst for understanding the crucial uppermost levels of knowledge of today’s world.

As for what Shermer personally thinks and believes, in addition to his interesting political hybrid libertarianism/liberalism, he is a science advocate, par excellence: “I hold that science is the best tool ever devised for understanding the world and changing it for the better.” (pg. 135)

And, in that regard, he adheres to the science: “In light of the accumulation of evidence, the position of denying global warming is no longer tenable.” (Scientific American, June 2006)

Shermer’s intellectual cachet comes from a broad, extraordinary experience as the Editor-in-Chief of Skeptic magazine for 25 years and as a monthly columnist for Scientific American for 18 years. From that broad eclectic base of acquaintances, guests, and interviews, he offers a collection of essays and articles, mostly by himself, supplemented by respected worldly scholars, scientists, the deepest of thinkers, and even the crazies of society.

He takes the reader on splendid journeys that pry open the mysterious, for example: from a scientific perspective, he gives consideration to “the two biggest questions of all” (1) Does the universe have a purpose? (2) why is there something rather than nothing?” (Pg. 103)

Those two high-intensity brainy subjects alone are worth a serious read of this finely written tome that also tackles the push and pull of today’s political bickering, Left/Right or, is classical liberalism the proper course?

And, speaking of the proper course of a properly run government, he goes so far as to tackle how Mars should be governed when colonists first set up a new outer space society, which will be in sharp contrast to the political beginnings of Jamestown Erectus, circa 1607. Keeping in mind: “The 1967 Outer Space Treaty that the USA signed prohibits anyone from ‘owning’ Mars.” (pg. 150)

And, fascinatingly enough, there is a reasonable answer to the prevention of a tyranny-prone Mars by establishing “modularity.” Which means, “literally incorporating liberty via architecture.” Whoever controls the production of oxygen is key. It could be tyrannically authoritative (monopolistic ownership) or it could be fair and democratic (individual ownership units), depending upon configurations and design of all-important oxygen, as architectural engineering holds the key to Mars’ future political structure.

Giving the Devil His Due is a treasure trove for lovers of the humanities and society at large as viewed through the perspective of scholarly minds, treatises, and essays. It’s marvelously ripened and full of wonderful tales about people, like Jordan Peterson, arguably the most controversial intellectual of the 21st century and one of the most polarizing figures in intellectual life since Noam Chomsky.

Peterson’s book 12 Rules for Life succeeds in “launching its author into the cultural stratosphere.” (pg.299) By way of an outside subjective opinion re the Peterson personality type hitting the world stage, according to Caitlin Flanagan, “Why the Left Is So Afraid of Jordan Peterson,” The Atlantic, August 9, 2019: “The left has an obvious and pressing need to unperson him; what he and the other members of the so-called ‘intellectual dark web’ are offering is kryptonite to identity politics.”

It’s these stories that offer the reader insight into true intellectual grit, as every printed word by Shermer carefully conveys meaning.

Postscript: “It is obvious that God was made in our likeness and not the reverse.” (Michael Shermer, Editor-in-Chief, Skeptic)