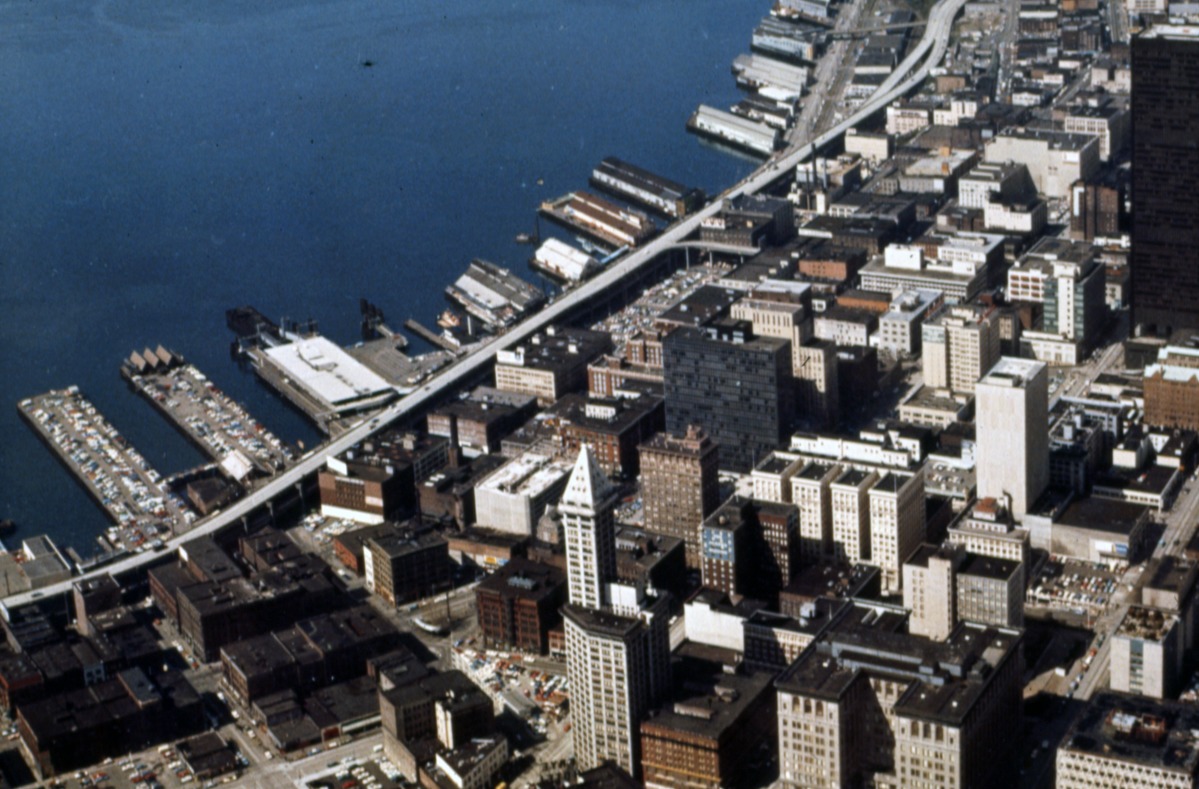 News item a few years ago: At a club in Fort Worth Texas, when a man found out his date was actually a man, he pulled a gun and fired at him, then fired a second shot when his date returned to get his purse and leather pumps. Both shots missed.

The Embassy was at Third and Union. It had been built in the 1926 by a Seattle building contractor who was married to the sister of Joe Danz, whose brother John Danz controlled most of the movie theaters in the city. The contractor got tired of him hearing from his wife what a great man his brother was and how much money he was making showing films. The contractor told her that anyone could make money showing movies and he would build his own movie theater to prove it. He did have a great idea. In those days theaters were placed downtown in high pedestrian traffic areas. Most of their customers were people walking by who would drop in for a film. Movies then were not made primarily for teenagers on dates. The theaters were open from ten in the morning till late at night. Drop in traffic arrived all day. The idea was to locate a movie theater on a busy street. His bright idea was to have it on a corner of two busy streets and put an entrance on each street to auditorium within. That way the theater could attract walk-by traffic on both streets.

The Embassy had box offices and marquees both on 3rd Avenue and on Union Street. In my years of traveling and showing films around the world I have never seen another theatre on a corner with two entrances. Customers walking along Third from the Kress store at Pike to the post office at University or from Bernie Utz hat store on 3rd Union to the J.C. Penney store at Second and Union could duck in for a look at the latest Hollywood flick. The Embassy did fine business into the 40’s but as the downtown deteriorated it went along with the trend and became what was called a “grind house.” It would show triple bill westerns, films a year or two old, and films that promised more sex than they could legally deliver. When the US Supreme Court said porn was legal, the Embassy happily started showing it.

The Palace Theater was at 2nd and Yesler, right next to the L.C. Smith Tower, the tallest building west of the Mississippi when built in 1913. The Palace was just as old. Its venerable age was reflected in its original name: The Florence. The Florence was in the Pioneer Square area of downtown. That area had gone south even faster than the corner of Third and Union. By the 40’s it was showing westerns. By the 60’s it had changed its name and became the New Paris burlesque house. It continued to showcase live strippers into the late seventies. In between the dance acts dirty movies would be screened. A friend of mine named Mike Copner was the projectionist during the strippers and films days. One of his jobs was to announce the names of the acts. The acts would supply him with their names. Unfortunately, Mike was a creative guy. One act called herself “Velvet Ice – the Tease with Ease” He introduced her as “Velvet Lice – The Sleaze with Fleas.” Another time Mike arrived for work and when running film he had found no sound in the auditorium, although the sound in the projection booth was fine. The mic also did not work. Mike went backstage to check the speaker connections. There he found……..no speaker! And it wasn’t just any old speaker. It was a genuine Altec Voice of the Theatre Speaker. If you have never seen an old one, the one at the Palace was about seven feet tall. Mike was able to hook up a lesser speaker to do the job that day. Eventually he heard from one the dancers that another dancer had a boyfriend who needed money, so he had backed a truck up to the stage, where she had earlier left the door unlocked, and he, I hope with some help, had absconded with very large thing. I wonder if the boyfriend’s dancer was Velvet Ice?

Running both theaters at the same time was not hard. The day would start at 8:00 AM at the Palace. The theater would not be open. I would thread both of the projectors, each of which would run over two hours of film. I could than leave. The box office girl would push the start button at nine. The Embassy was nine blocks north. It would not open till nine. A leisurely stroll would get me there at 8:30. At noon I would walk down to the Palace and start the routine over again. The days went by like that. A little work and pleasant walks in between. I could stop in a café for coffee or lunch.

I got to know a lot of the people who regularly walk the streets of a large city. In those days downtown was a sleepy place during the day, especially south of Union which was where I walked. I would often run into Bearcat Baker, an old boxer from the 1930’s and always buy a newspaper from Seby, an old newsie who had been selling papers at the corner of first and Pike since the 1940’s. I would pass by the black preacher who handed out tracts on the corner of Third and Pike. He was a very solid man who always wore a black suit, white shirt, and black tie, no matter how hot it was. If you didn’t take his tract you would hear him mutter under his breath, mostly to himself, “He’ll go to Hell!” I could also stop in book or antique stores. If there was a technical problem at either theater upon my arrival I could always say I had to stop at a hardware store for or fuses or something.

Along my normal route was the 611 Tavern. It was at 611 Second Avenue (near James Street). It was nice old bar that was a favored spot for drag queens, transvestites and other cross dressers of various stripes. One night, as I approached the 611 around ten at night, I saw the tail end of a Cadillac sedan with Texas license plates protruding onto the sidewalk from the crashed in front window. The dust had barely settled. Several very tall women with big feet jammed into high heels were gathered on the sidewalk examining the damage. One of the them told me the story.

A cowboy had entered the bar an hour or so earlier. He had just driven in from Dallas and had randomly selected the 611 for a cooling drink and the chance of meeting a warm companion. He made friends with an attractive drag queen having no idea she was man. After several drinks he got friendly with his hands and once they arrived under her skirt he got the shock of his boy-from-Texas life. He also got mad. He stormed out of the bar and soon returned. This time he didn’t walk through the front door. He drove through the front window. He must have been going fast. Only his tail lights were sticking out over the sidewalk. Twenty feet of caddy was inside, bellied up against the bar. The police had already cuffed him led him away. No one inside had been hurt.

I don’t know what kind of sentence the man got for his rash act. Maybe it was a stolen car and the cops had found drugs inside. Maybe when he got out of jail and being born under a bad sign, had later made the same mistake in his home town of Fort Worth. I’m sure if Texas governors from J.Pinckney Henderson to Rick Perry were aware of this, they would not have allowed such cross-dressing men to stay in the state and lure red-blooded Texans into acts of violence.