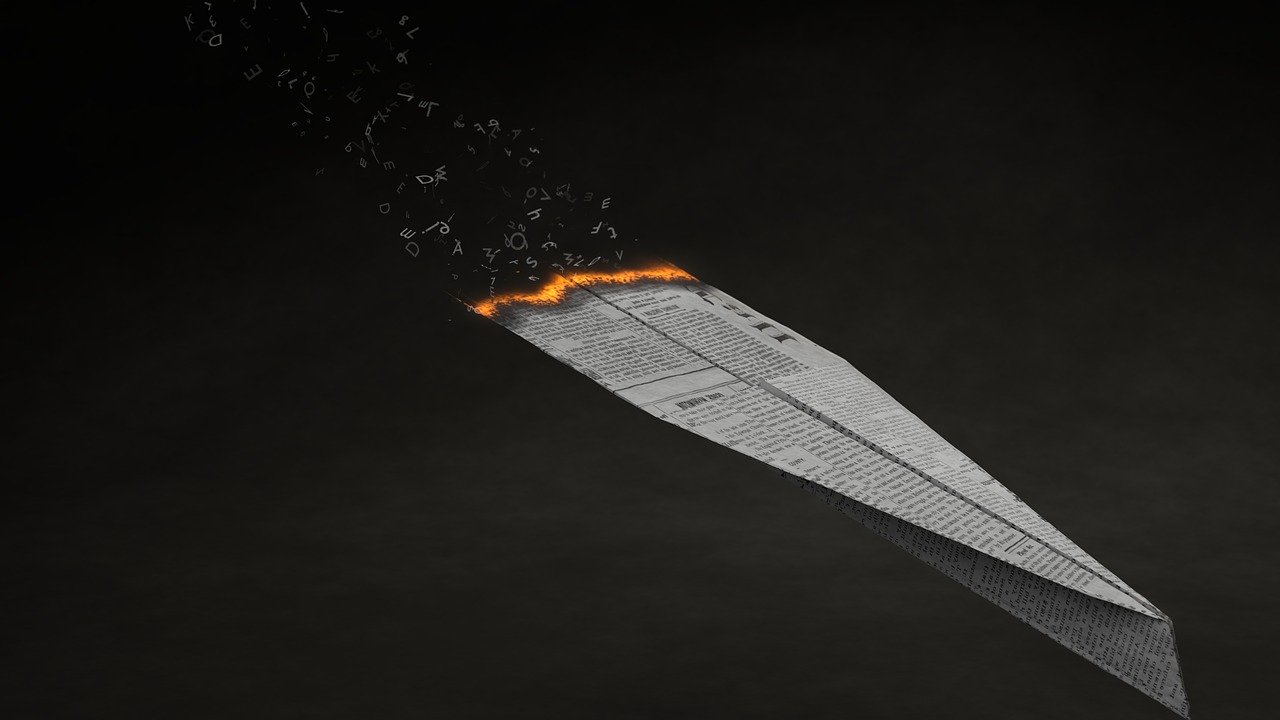 There has been a new wave of despair among journalists in the last couple of weeks as several major news outlets, including the Los Angeles Times and McClatchy News Service, announced layoffs and/or pay cuts. The immediate cause is the coronavirus. Pandemics sharply reduce advertising opportunities, but the underlying model is clearly not viable for most news outlets.

There is a limited amount of money that businesses are willing to pay for web ads, which is now by far the largest form of distribution. This is especially the case when Facebook and Google can offer much better targeted advertising. Subscriptions can raise some money, but apart from the New York Times and a few other elite publications, this source of revenue will not go far in supporting the people who produce and edit content.

While the immediate problem of the coronavirus forced shutdown will eventually abate, the longer-term trends in the industry are not going away. Fewer and fewer journalists will be supported through the current model, leaving us ever more poorly served. We clearly need a new model.

Most of the thinking on a new model involves some sort of government subsidy to existing news outlets. This is likely a political non-starter, since it is almost inconceivable that Republicans would support papers like the New York Times or the Washington Post, much less more progressive outlets. Of course, few non-Republicans would be able to stomach tax dollars going to Fox News or some of the other looney outlets on the right.

It is also hard to justify from a moral standpoint. Why should the government entrench the current structure of the media? Maybe at some point in the past people thought that certain news outlets provided valuable content, and that made them profitable (or they just had good marketing), but what is the rationale for locking in this outcome with government dollars?

There is a way around this roadblock. Instead of having the government directly give money to news outlets, we can have the government give individual tax credits to people, who could then support the news outlet(s) of their choice. The model for this already exists: the charitable contribution tax deduction.  (I discuss this in somewhat more detail in chapter 5 of Rigged [it’s free].)

With the charitable tax deduction, the government is effectively picking up the tab for 37 cents of each dollar of a rich person’s contribution to whatever charity they choose. If a rich person decides to give a million dollars to the local symphony, we give them $370,000 back on their taxes. The same is true if they give the money to a museum, or the Church of Scientology.

I picked the last one to make the obvious point that this subsidy is not necessarily going to an organization that many of us would think of as serving the common good. Perhaps we should be bothered by that, but in any case, we have been living for decades with a tax code that provides large subsidies to organizations that many of us would not approve of, without it become a major political issue.

An individual tax credit would work along the same lines as the charitable contribution deduction on income taxes, with some important differences. First, it would be a credit, let’s say $100 per person, that would be fully refundable. This means that every adult in the country would have the right to give $100, regardless of whether they owed taxes or not. This is far more progressive than the charitable contribution deduction, which overwhelming benefits high income people. This is in part because the value is larger for people in higher income tax brackets (it’s worth 37 cents on the dollar for people in the top bracket, versus 12 cents on the dollar for the bulk of the population in the 12 percent tax bracket). Also, only people who itemize can benefit from the deduction, and the vast majority of moderate and middle-income taxpayers do not itemize their deductions.

The second difference would be that it would be used for supporting journalism and other creative work and workers. This could mean writers of both fiction and non-fiction, musicians, moviemakers, and other people doing creative work. The reason for drawing the line broadly is that we don’t want the I.R.S. to be in the business of deciding who is doing journalism and who isn’t. If we draw the lines at creative work, we don’t have to get into arguments about whether a reporter with a political slant is still doing journalism. Also, all creative work has suffered in the Internet age, as it is very difficult to raise revenue from recorded music, videos, and other material when it can be transmitted at a near-zero cost over the web.

There will still be boundary questions, where it can be debated whether work can qualify as “creative,” but this is not likely to be a major problem. After all, someone could try to qualify as a tax-exempt religious institution by creating the “Church for Ripping Off the I.R.S.” Scams do happen, but they are not frequent enough to be a major problem.

The other aspect to filing to be eligible to receive money through the tax credit system would be that the person and/or organization would be denied getting copyright protection for a substantial period of time, say 3-5 years. The logic here is that copyright monopolies are one way the government supports creative work. The tax credit is an alternative mechanism. People are entitled to getting support through whichever mechanism they choose, but not both.

The nice aspect of this provision is that it is entirely self-enforcing. Suppose that we have a 5-year ban on copyright protection, that a popular singer tries to get around by securing a copyright for songs recorded three years after their last payments through the tax credit system. Since it would be public record that they had been in the tax credit system three years earlier, anyone could freely copy and transfer the new songs in spite of the singer’s copyright. He would have no recourse, since the copyright was not legally issued. This requires no action from the government; it is simply not enforcing an improperly awarded copyright.[1]

Supporting Journalism and Creative Work in the Tax Credit System

I once used this $50,000 figure in a talk and got many creative workers very angry at me, since they felt I was under-valuing their work with this number. There are two important points to remember here. First, many creative workers, such as musicians or writers, do this work part-time. In other words, they have day jobs. For these people, getting $50,000 a year for work they very much value would sound quite good.

The other point is that being in this system does not prevent creative workers from making money through other channels. Musicians could still get paid for live performances or teaching music. Writers could get paid for workshops. In fact, nothing prevents someone from even printing out books (or newspapers) and selling them at a profit. However, without copyright protection, they probably could not hope to make too much money going this route, since a large markup would lead others to enter the market and undercut their price.

From the standpoint of the individual taxpayer this system could be made very simple. Individuals could have the option to make their $100 contribution and then file for their refund on their tax form. They would only have to identify the recipient in the event of an audit. Alternatively, the I.R.S. could provide a number corresponding to every eligible recipient of the tax credit. The person would then indicate which individual(s) and/or organization(s) they wanted to receive their $100. This could be divided among as many recipients as the individual chose.

To benefit from the tax credit system, creative workers and organizations would have to promote themselves as being worthy of people’s contributions. For newspapers and television news outlets, they would have to make a case that they provide especially useful and important news or that they give a political slant that people should find appealing. Writers, musicians, and other creative workers would have to tout the merits of their work. Alternatively, organizations that support particular types of writing or music or other creative work would tout the great work they are currently supporting.

As with the current system, there is no guarantee that everyone who wants to do creative work would be able to find enough backers to support themselves. If not many people value a particular writer’s work or a musician’s music, then they may not be able to make a living under the tax credit system, just as is the case now.

Obstacles to the Tax Credit System: Politics and Simplicity

I have no illusions about the obstacles to implementing a tax credit system along these lines. A large segment of the political establishment (pretty much the whole Republican party) would be very happy if any sources of information other than Fox News disappeared. They would have zero problem if every newspaper in the country went under. Most of them don’t really care about the fate of other creative workers either. That is an enormous obstacle to any effort to having a new program intended to shore up reporting and boost creative work.

But there is also the obstacle that many people who do support independent reporting can’t get themselves to think beyond the current system. Many continue to believe that what we just need is direct government subsidies to the existing outlets, as though this would be politically feasible or even desirable. Looking to a whole new system is a step too far.

The proposal outlined here probably also suffers from its simplicity. I recall once having an extended exchange with a professor at a major university. I explained several times how the system worked and how it would be determined who would get how much money. He was still insistent that I needed a measure of clicks or some other unit of viewership to determine the money that outlets or individuals received. For some reason, he simply could not understand that people’s contributions were the sole determinant: end of story.

Anyhow, I have never heard a remotely compelling argument as to why a system along the lines I have outlined would not work. I get the political obstacles, but if someone says we don’t have a way of supporting journalism in the Internet Age, they just haven’t done much thinking on the issue.

[1] We also would need some rules to prevent simple types of fraud. For example, to prevent two people from trading their credits with each other, we could set a minimum level (say $3000) for someone to be able to get money through the system. People could still scam the system, but it would require a lot of effort for not much payoff.