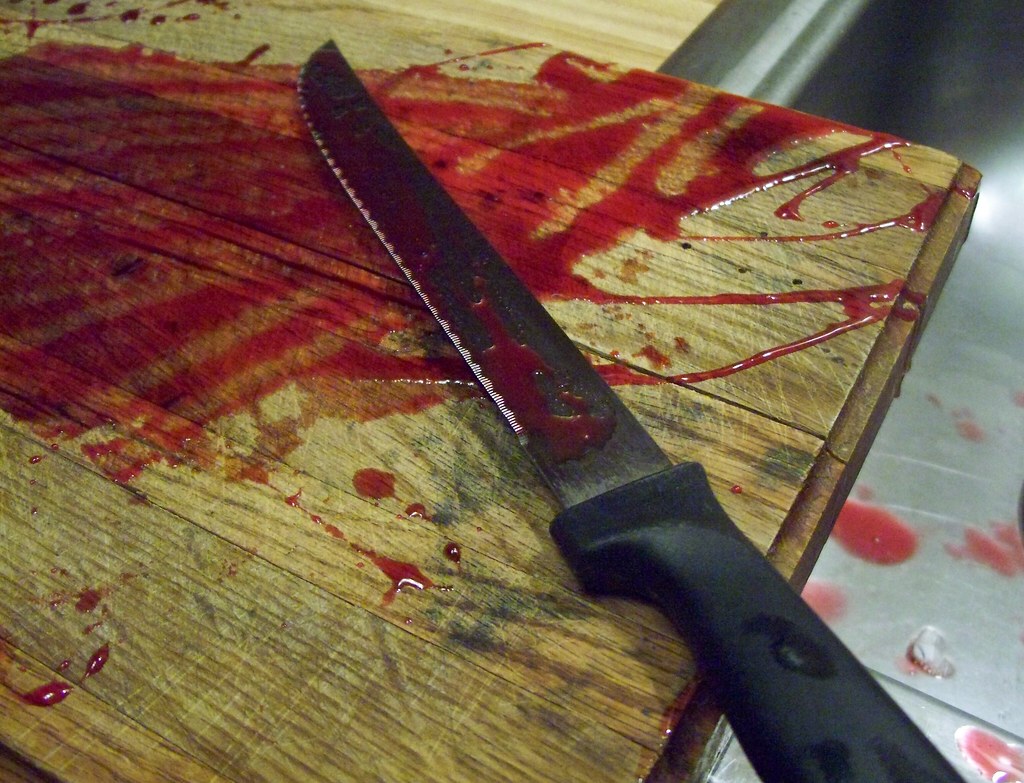 I used to be beautiful.

That’s not my ego speaking. Mind you, I am objectively gorgeous. I used to be the most lucrative model at my agency; I walked in thirteen fashion shows and graced nine billboards, all within the first year of my contract.

I was supposed to end my third year starring in a music video, but I’m stuck in the slammer instead.

I suppose I’m still pretty, but not like I used to be. I think I’m allergic to the soap here. My skin used to be ivory, now my face looks like it’s covered in red stucco. God, I miss my toner and moisturizer. Shampoo and conditioner, too–my golden locks resemble hay that a starving horse wouldn’t even chew. And if you thought I entered this place skinny, you should see me now. My sharp jawline is no longer modelesque. I’m a shell of my former self.

I’d say my blue eyes don’t twinkle like they used to, but they didn’t twinkle before my arrest, either.

They haven’t twinkled since the incident.

On some level prison feels like an escape. Kind of like a vacation.Though not your typical destination, like the island where I shot a perfume campaign–there is no turquoise sea and pink sand here. However, no one cares about who I am. No one blushes when they see me, either. As I said, I’m no longer beautiful. I’m not Katiana the Supermodel, but I’m also not Katiana the Prisoner. For the first time since my parents’ car accident, I am Kate.

I’ve thought about my old life more in the past two months than I have within the last three years. When I initially moved from Oklahoma to New York, I saw the city through my parents’ eyes. My mother used to love musicals; I cried thinking about her when I watched my first Broadway show. My first apartment neighbored a vintage record store, so I bought my father’s favorite Grateful Dead albums and hung them on my wall. And all I wanted for my first New York Christmas was my parents, for them to be alive, to see their awestruck faces gazing at the Rockefeller Center Tree.

But then the top modeling agency in the world offered me a spot on their roster. I accepted as Katiana. Kate wouldn’t make it in the Big Apple. Truthfully, if my folks hadn’t died, I’m not sure I ever would’ve left Oklahoma. I’d like to believe everything happens for a reason, but then I remember I’m writing this from my jail cell.

I didn’t expect to meet Kate again, but it’s the little things that remind me of home. Such as the lasagna I ate last night. Most of the food in here tastes like rubber, but lasagna was my mother’s favorite dish, and I ate it because I finally could–my agent used to say carbs were the devil. My fellow inmates and I play cards, and my parents loved a game of Rummy. They also loved to watch Jeopardy, and when.the show plays on my cell’s twenty four inch TV, I can almost hear my parents hollering the answers. In prison, Kate and I have reunited. Maybe we were never meant to part.

See, I did like Kate. Self-esteem wasn’t the issue. If it were, why would I move across the country to pursue modeling? Kate was pretty, but in a simple way, certainly not a high-fashion way. Like the girl you’d see in some infomercial for cleaning supplies. Kate was too sweet, too gentle, and I had to protect her innocence. So instead, I stepped into Katiana’s shoes—her six inch, red-bottomed heels—and morphed both in and externally.

My high school public speaking teacher had a neon sign which said “Fake it ‘til you make it.” That’s what I did as Katiana, and that’s how I became New York’s It Girl. I flirted with the right executives and strutted into every room like I owned it. I was the girl every man wanted to be with and every woman wanted to be; my life felt like a movie, and it was only beginning. Just when I thought I’d reached my apex, Hunter Blake invited me to star in his next music video.

I thought it was a prank. Hunter Blake, People magazine’s “Sexiest Man Alive,” the singer-actor-dancer extraordinaire whose photos used to adorn my Oklahoma bedroom, wanted me in his music video. I’d met tons of celebrities, but Hunter was the only one I idolized as a young girl. For a moment I felt like Kate again, but when I agreed to star in his video, I was back to Katiana. Hunter decided to fly into town to meet me that weekend.

Before I continue, please understand that I’m not naive. I knew Hunter wanted to bang me. That’s the general rule when a singer chooses you to star in his video. I figured I’d get to know him through filming and then I’d decide if I were down. He told me to meet him at his favorite club in New York, which, unironically, was my least favorite spot, but nevertheless, I obliged. I donned my favorite black dress, painted my face, and followed the bouncer to Hunter’s exclusive table. Hunter was shorter in person. I opened my mouth to say hello, but he grabbed my chin and pressed his lips onto mine. That was when I knew I’d never sleep with Hunter Blake. That was also one of my last vivid memories, because after I let Hunter pour me a drink, the rest of the night blurred. I almost wish I completely blacked out.

I wish Hunter’s drugs were stronger. If I had to be raped, I wish I didn’t wake up to flashbacks every subsequent night, sweating, shaking, sobbing. I wish I didn’t have to see his smarmy grin all over social media, knowing he’d face zero repercussions for violating me, and probably other women, too. But mostly me. For his sake, I really wish he hadn’t chosen me. For his sake, I really, really wish he knew that I am not the girl to mess with.

Hunter Blake would have to pay. I wouldn’t have peace until I watched him suffer. So I told him I couldn’t stop thinking about him; I needed to feel his body on mine and I couldn’t wait until we met up for the video. I gagged as I sent the text, but predictably, he hopped on his jet and reserved a penthouse suite at The Plaza. I showed up–beautiful as ever–in a brown trenchcoat, nothing underneath other than red lingerie and a knife.

I didn’t intend to kill Hunter Blake. Death would be too easy. He deserved enduring pain. When he opened the door and I unbuttoned my coat, he was putty in my hands. I pushed him onto the bed, straddled him, reached into my inner pocket, and I stabbed him in the face.

Once would have sufficed. But adrenaline kicked in, and I figured I may as well destroy him symmetrically, so I stabbed both of his cheeks and shoulders. I probably could’ve kept going, but blood splattered like a sprinkler, and I couldn’t leave the hotel looking like a serial killer. I jumped off and slipped back into my trenchcoat, grabbing a wet towel from the bathroom. I wiped the blood off my hands and forehead as Hunter howled from the bed, and then I called a cab.

I’m not sure what happened next. I assume Hunter crawled towards his phone and dialed 911. Or perhaps he screamed until hotel staff came to his rescue. Nonetheless, I wasn’t surprised when two cops showed up at my door in a little under an hour. I think they were a bit starstruck; the dudes stared for a solid ten seconds before whipping out the handcuffs. In normal circumstances they probably would’ve asked for my autograph.

I think the police were surprised by my candor. I don’t know why–my fingerprints were all over Hunter’s penthouse suite. The hotel had footage of me entering and exiting. How could I lie? I’d imagine most alleged criminals aren’t as forthright as myself, but I had nothing to hide. I plead guilty and told the police exactly what happened. Hunter raped me, so I stabbed him. It’s really very simple.

The story blew up instantly. The world already knew who Hunter was, but if they hadn’t heard of me, they did now. You couldn’t browse any news outlet without seeing our faces. I learned about me as the public learned about me–everyone I’d ever crossed paths with had to capitalize on my notoriety; they craved their own “five seconds of fame.” I mean, even my old pastor and elementary school teachers interviewed with Oklahoma News, and I hadn’t spoken to any of them in years! My life transformed from a movie to a documentary. The whole world wanted to know: Who is Katiana Jones?

A hero. That’s who she is, according to the dozens of other women who admitted Hunter had violated them, too. Like me, they’d also been silenced, their careers threatened. I was the only one brave enough to take matters into my own hands. For that, they declared me a living legend.

But still I was a felon. Despite the insurmountable allegations against Hunter Blake, I stabbed him four times. His case hasn’t been resolved, but his lawyer (who represented an acquitted governor) argues that my attack and the obliteration of Hunter’s reputation has been sufficient punishment. My punishment, on the other hand, was two years in prison, followed by two years of probation.

I’ve been locked up for over a month and I’m still trending on Twitter. #FreeKatiana. I’ve “started a movement,” said the news anchor on my cell’s TV. Women are marching in the streets and sharing their own sexual violence stories. Apparently I’ve inspired them to avenge their rapists, too; some nonviolently–like spray-painting his home or keying his car–but others have literally copied my blueprint. I don’t know how to feel about this.

The prison guards say I should be proud. Last week one of them printed an article she knew I’d appreciate. I hung it above my bed and I read the introduction every morning.

Katiana Jones was a small town girl who lost her parents in a car wreck, moved to New York with nothing other than the shirt on her back, and became a top model overnight. Ms. Jones accomplished every girl’s dreams, but she sacrificed it all to defeat Hollywood’s most insidious sex offender. The former model will be studied in history books; Ms. Jones stimulated a larger conversation about the industry’s rampant yet covert sexual assault. Katiana Jones–originally born Kate Jones–is beautiful, for reasons far beyond her aesthetics.