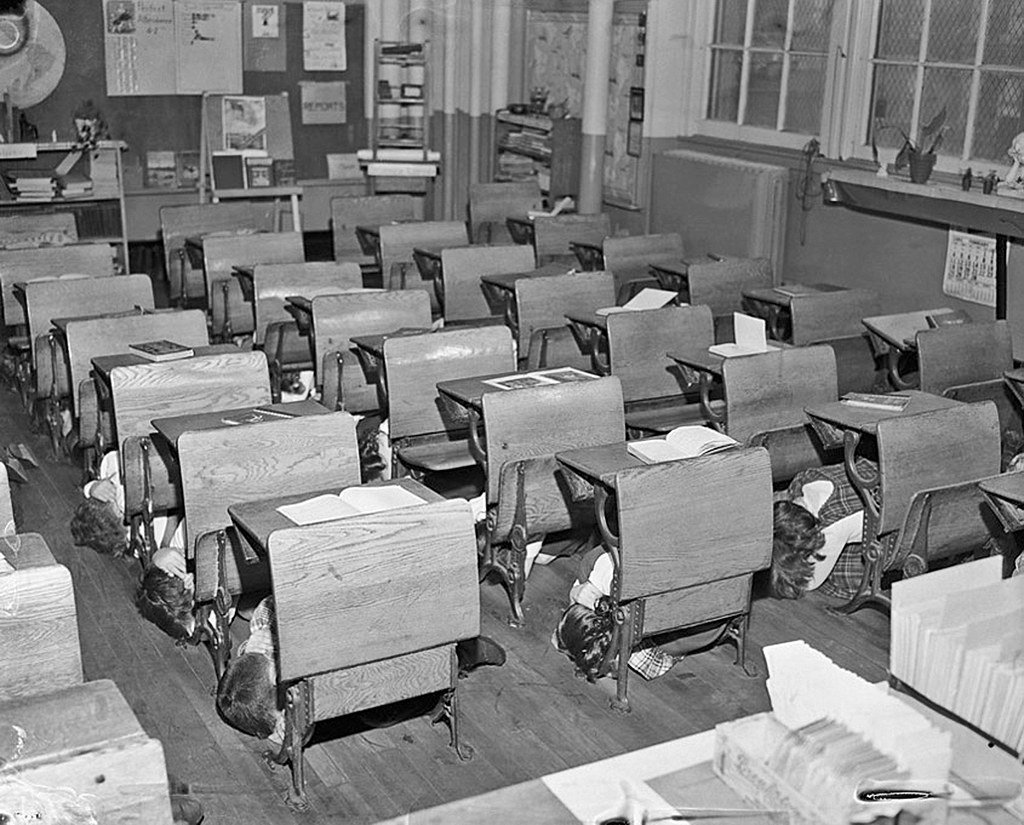 I think I was ten years old when the thought came to me with absolute sureness that I would never live to be twenty. I was certain I would die in a nuclear holocaust. I didn’t know what a holocaust exactly was, but I believed in it with all of my heart. Starting in kindergarten I had regularly taken part in bomb drills. The first were the “duck and cover” drills where all of us in the room at Arnada elementary school would duck under our desks and try to imagine the flash of light and the windows exploding into the room. My school desk didn’t seem like much of a defense against flying glass. We would also, on command of Mrs. White, file out into the hallway, and take seats against the wall. The lights would then go out and we would sit in the dark with our thoughts.

Arnada was a beautiful old building. It had been built in the previous century. The wide staircases slightly sagged from the aggregate weight of the tens of thousands of children over time. The gymnasium still had the old markings for the narrow free throw lane that had been widened everywhere else to make the game fair for the foes of the gargantuan Wilt Chamberlain. The playground was bordered by trees and bushes where any pervert could hide. Or so we were told.

Arnada was torn down after I finished first grade. A little league field took its place. I played ball there until I was old enough for Babe Ruth League action, which was played on full size fields. When I was in college the little league field was replaced by a freeway cloverleaf. I take that exit now and then. It’s a funny feeling to drive through the space that once was my old school, and at the same time pass through the outfield where I often up gazed up at lazy fly balls against a blue sky crisscrossed by jet contrails.

For second grade I attended Lincoln elementary. It was in a much newer building. I’m not sure how my mom arranged for my sister and me to attend Lincoln. It was a forty block walk from our house. Hough elementary was much closer, but our mom felt that “rough” children went there. I liked the long walk to and from school. It terrified my sister. She was two years older. I could be carefree. She felt responsible for me.

There were no bushes around the playground for perverts to hide in. Of course, there were perverts around. During show and tell one morning my friend Tricia told of walking to school that morning and having Mr. Smith appear on his front porch in a bathrobe to open it wide to show he didn’t believe in wearing pajamas or any other undergarments at all.

The Cuban missile crisis occurred during third grade. That was when we had the go home to die with our family drill. Miss Kelly didn’t call it that, and I didn’t realize it at the time, but what else could it have been for? One morning we were given heavy paper placards with our names, parent’s names, and our home address’s on it. The placards were various vivid pastel colors. Thick colored yarn passed through holes at the opposed top corners so the placards could be hung around our necks. The yarn matched the colors of the placards.

We were told to keep the placards in our desks. That same day we were given a letter to take home to our parents. It told them that in a few days there would be a drill where we would be sent home from school and would a parent please be home for us. It might have told more than that. I wish I had a copy of the letter. My father was in the merchant marine and was away on a ship. My mom worked as a medical secretary and didn’t get home until five in the afternoon. Every day my sister and I would walk after school to day care house run by a woman named Judy. Mom would pick us up when she got off work.

Mom must have thought being home to figuratively die with us was not important enough to take a day off work. I’m sure she would have been there for the real thing. We were sent to school with a note that said we would go to Judy’s house for the drill. The placards had to be changed. The new ones were a different color. The color was important. The town had been divided into a grid. Each square of the grid was assigned a color. When the alarm would ring we were supposed to walk calmly onto the asphalt play area and look for a square area marked in chalk that matched our color. There we would join the other kids who lived nearby to us. We would then fall into lines and wait. After that roll call would be taken and all the kids would be inspected to make sure their placards were legible and in place. A whistle blown by the principle would be the signal to march home. It seemed like a very well planned drill. Happening on such short notice made it even more admirable. It could be the drill was designed by extra smart people at the federal level. The same extra smart people who were bravely leading our rush toward nuclear Armageddon.

The day of the drill was a beautiful fall day. We were not told what time the drill would happen. They wanted it to be as natural as they could make it. We were all expectant and also glad that we would be let out early. We were hoping it would be in the morning. It wasn’t. The alarm finally rang at two in the afternoon. I quickly grabbed my placard and hung it around my neck. Some kids slowed down the process by having the information hanging facing their chests. We were soon running out on the playground and looking for our squares. They were all there. Things went like clockwork. There wasn’t a lot of chatter. Somehow it had been pounded into our childish minds that this was serious business. After a short time the whistle blew and off we went, brave little soldiers in the war against Godless Communism, bravely facing our end.

The next day we brought the placards back and put them in our desks so they would be there for the real thing. After a couple of weeks the placards were collected and thrown away. After that it was just back to occasionally cowering under our desks or in the halls. I don’t remember when the drills stopped. I’m sure there was no announcement made that the threat was over and we could relax. I didn’t relax. I knew the bombs would someday fall and my desk would not protect me.