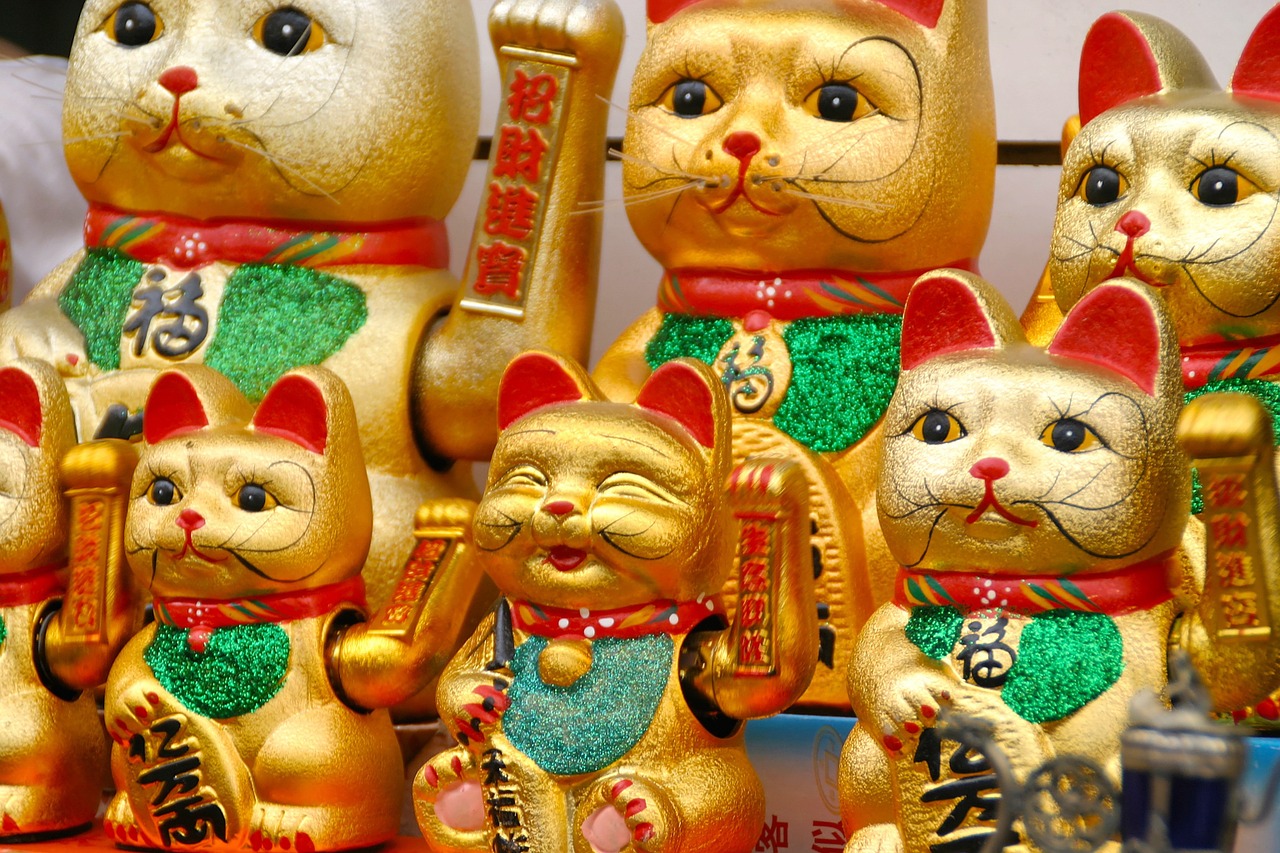 “Alright, hand it over.”

I gestured with my gun to his backpack, and he relinquished his items without a fight. How silly does someone have to be, to wander the apocalypse without any form of weapon? The contents of the bag further eluded me; there were the typical cans of food, and N95s to keep the ash out. But otherwise? Every nook and cranny of his backpack stuffed with little statues of cats, the type you find when families used to eat at Chinese food joints. They were plastic and ceramic, and white and gold, and somehow every one of them had their little paws pointed upwards towards the sky that betrayed us all.

He senses my confusion. “They’re Maneki Nekos.” he says, looking away from the barrel. “Good luck charms.”

“I know what they are,” I reply, my search coming to a close.

I ended up stealing a couple of his N95s, planning to replace my bandana with them later. I hand him his backpack back, and lower my handgun. He is no threat, simply a fool. “Why do you have so many?”

“There’s an old souvenir shop about a mile from here. I’ll tell you along the way?”

He shrugs his shoulders, and the little cat charms tied to his backpack jingle. “We all want protection. I don’t need it from you though.”

I follow him, out of curiosity. He has lots of friends, he ex¬ plains to me, his boots minding the mud puddles on the way to the abandoned shop. Are they hole-ridden? I can’t tell. Their main base of operation is in the next state over, and they collect the cats, as many as they can find. “They’re lucky,” he states, over and over again, clinging to his words. At this point I couldn’t say if he means the cats or his friends.

“There’s thousands of them, at this point. We’ve put them all in a held outside. Lots of ‘em are solar powered, so—”

I step in a mud puddle, the water bleeding inwards.

“The sun hasn’t shown through in years.” I say, through the sock squishes. I would have stopped to change it out, but my joints were beginning to Hare up. “You know this. You’ve lived this.”

“Yeah, but when it does, they’ll power back up, and they’ll start beckoning again.”

The next time I look at him, it’s as if one of his cats has ma¬ terialized into his hands. He thumbs the shiny coin held against its belly, a soothing, repetitive motion that I get lost in. His nails paint¬ ed. Where did he get the polish? “I know what you’re thinking…” he mumbles, quietly. “We’re never going to see it again. But they will.”

It wasn’t a souvenir shop, we found out. It used to be a thrift store. It was raided a lifetime ago, the windows broken, shards taken for Hrestarters and for knives. The heavier clothes stolen for warmth, the flimsy ones for bandages and tourniquets. All the re¬ maining items inked in a black soot, undisturbed.

Despite the error, he inspects the shelves anyway, perusing what remained of the isles as if it was a Sunday errand run. With¬ out a cart to carry things in (they were always in hot demand by other stragglers) he pushed an imaginary one, throwing a screech¬ ing sound with his voice as if the cart he had chosen had a broken wheel. He suddenly drops the facade, to push aside a couple of broken clocks on a shelf, and I know, and he knows I know.

He pulls out a lucky cat, and his smile creeps past the edges of his mask. It was white, at one point, but the air had yellowed its plastic fur. He loves it anyway, I can tell. There’s another one further back, jet black. “You can take this one,” he says, brushing it away the layer of ash.

I thank him, putting the cat in my own bag. He wants to set off to an old arcade two miles west. The sky is darkening further; the sun would be setting now. I tell him I’m going to stay here. He begins to leave anyway.

“I don’t know why,” I begin, “but I just have this… feeling, this feeling that you should stay here for the night.”

He believes me, and we make camp on the tile floor. He tells me the rules of cat collecting, between bites of a can of Spam that we split. His friends are pacifists. They take the statues, but not the plushies, or anything else that won’t hold up in the weather. If they find actual cats, they feed them and take them to the epicenter.

More importantly, the different colors of cats have different mean¬ ings; the black one he gave me, for example, wards off evil spirits. There’s points involved, I learn. A tally is carved into a wooden board when they bring new cats in. His best friend Tyra, he tells me, is second in the game of cat collecting. He’s very proud of her and her accomplishments. I’ve forgotten if I’ve accomplished anything.

One hour later, a putrid storm rolls in, drowning the outside world in a deluge of acid rain that would have burned through our clothes and skin, leaving us dead if we were on our way to the arcade.

I take a bite of my Spam.