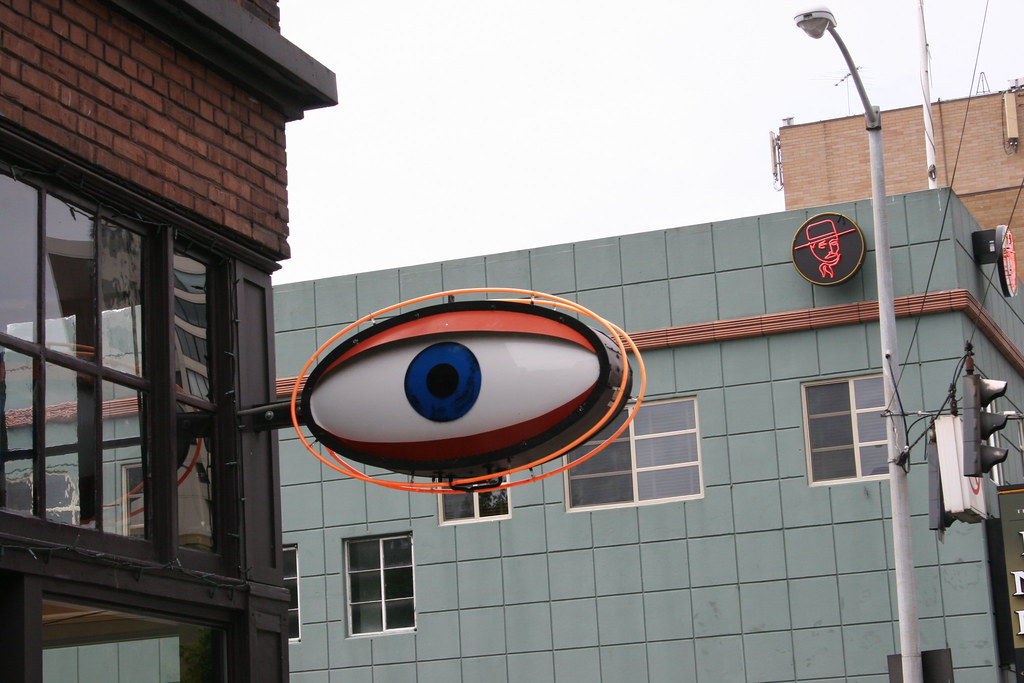 I had the distinct pleasure of dining recently at the famous Cyclops in Seattle. It’s been around for a long time and has been a favorite haunt of folks like the band Soundgarden, Eddie Vedder, Dave Grohl, and other legendary grunge rockers. As a matter of fact, Krist Novoselic’s tooth is embedded in the bar (bass player from Nirvana). You can also find one of Jimi Hendrix’s guitar picks.

The co-owner of the restaurant is John Hawkley – a very gracious host. He’s been involved in some pretty interesting music projects himself. (Ask him about his classic Sears Silvertone electric guitar.) You can usually catch John at the cafe mingling with the clientele Wednesday through Sunday 3 – 10 PM. Sometimes he’s there with co-owner Gina Kaukola.

The business moved from its original location nearby years ago. The former building was demolished by real estate developers in 1997. Historic Seattle claims that it once housed Jack Kerouac during his sojourn in Seatown.
Now the ‘clops is located in one of the few buildings in the area still standing from the early part of the 20th century. After the Denny Hill Regrade era it was called a “worker’s hotel.” Located on 2nd Ave in Belltown, this is authentic Seattle – a little weird and a lot of fun!

The Cyclops is a totally unique experience. It’s also an art gallery. The art in the establishment is truly amazing. John asked his talented friends to provide pieces for the décor, including a large portrait of Malcolm X. I really dig the Easter Island style moai lamps.

You simply must try the signature Cyclops IPA from Boundary Bay Brewing in Bellingham. It’s one of the best microbrews I’ve ever tasted. Unfortunately, Cyclops IPA is only available at the Cyclops Cafe! “C’est dommage,” as my French friend would say because I’d love to buy a six pack. Thankfully you may order a pint to go!

I ordered the quesadillas which come with chopped tomatoes and chipotle salsa. The ample portions however, didn’t last very long as I devoured the entire tasty dish immediately.

The usual rules applied: Masks are mandatory, customers are not allowed to congregate at the bar and occupancy is restricted to 25%. There were only five people in the restaurant at the time, so social distancing was not a problem.

I highly recommend the Cyclops for a rare taste of old Seattle. It’s a fun, creative place to dine. The atmosphere is very casual and the background music was Jack White and The White Stripes. I don’t know what the reader may prefer, but personally, I love to hear rock and roll when I eat. But of course, I’m a musician so that’s par for the course…

The next time you’re in Belltown check out this Seattle jewel. I promise you won’t regret it! Just tell John that MTC sent you…