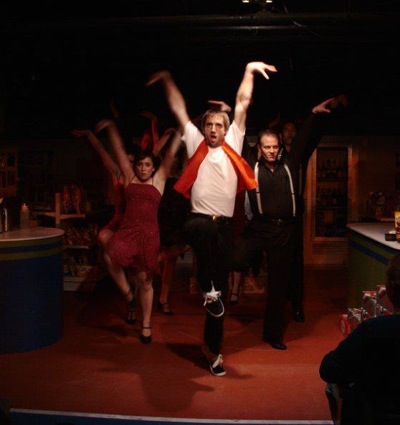 When Wayne Rawley left Seattle in the early Aughts, he was a playwright who had finally seen the true scope of his talent’s horizon. The local success of his early serialized comedy Money and Run at Theater Schmeater gave him license to start using that venue to experiment with his writing. Among those experiments was Rawley’s adaptation of Anton Chekhov’s The Seagull, in which he took the basic storyline and transplanted it to modern day Hollywood, placing Chekhov’s ruminations on aging, loyalty and familial duty in an accessible setting, while keeping the dynamics of the original’s humor and drama in place. The piece also allowed Rawley to pay tribute to someone who is clearly an influence on his writing.

With Live! From the Last Night of My Life, which is written and directed by the local playwright and is currently in production at The Schmee — his theatrical alma mater, Rawley gives an homage to a number of influences, John Hughes movies and the soundtracks to those movies, the pop-culture referencing dialogue of Quentin Tarantino for example. Chief among them, however, is a respectful nod to an early Chekhov work (Ivanov, for those who are familiar) which was recently produced, superlatively, by The Paradise Theater out on the peninsula.

Set in a convenience store in Marysville, WA, at a time where the dot-com boom was about to go bust a little further South on I-5, the play is set into motion as young Doug Sample (Ryan Higgins) comes in to work the 12-hour graveyard shift. Quickly, Rawley establishes the rhythms and milieu this play will inhabit: fast, funny dialogue filled with realistic emotions delivered by recognizable characters who are given to immersive flights of fantasy. In other words, we’re in pure Wayne Rawley territory.

As we watch Doug’s friendly and semi-exasperated banter with Sharon, his supervisor at the Super Slurp that’s several years his junior (Katie Driscoll), Doug semi-awkwardly slips into a moment where he sincerely shares a moment of kindness, which she blithely ignores. It is here that we first notice that something is not quite right with our hero. This impression is solidified the further we get into Doug’s shift, where it is soon revealed that Doug intends to kill himself at the end of his shift (not a spoiler, considering that development is implied in the title).

What’s ailing young Mr. Sample is a general dissatisfaction with what his life has amounted to, which thus far includes a failed relationship and a dissatisfying job at Amazon; while his potential is remarked upon by many characters, it is something he does not see in himself, ergo, his ensuing emptiness and resolve to end it all.

There are a large number of things that keep the experience of watching Live! from becoming a slog through someone else’s whimsy and ennui. Primary among these is Rawley’s keen sense of observation, and how that helps to ground the production in a recognizable reality. There’s a recurring gag thrown in where we see Doug’s clients struggling to remember which gas pump they are stationed at; we have both seen and been these clients, and the laughter derived from their foolishness is borne from recognition. The same applies to to the bits surrounding an annoying in-store beer promotion and any number of laughs derived from Rawley’s attention to detail.

This verisimilitude extends to every aspect of the production; the set design is impressive in its seeming simplicity. Sure, all they had to do was recreate a convenience store, but read that again. No detail was spared in the recreation, to the extent that your correspondent found himself wondering why it is that you could only find Aim and Close Up toothpaste in these establishments. (No, really, why is that? Who’s that desperate for toothpaste?)

This grounding in reality also allows Rawley to indulge in the fantastical elements built into Live‘s DNA. We are treated to flashbacks, semi-direct address, dance/roller skating routines and several musical interludes (when was the last time you listened to The Dream Academy’s “Life In A Northern Town”?); all Rawley trademarks, but used in a manner that allows Live to be one of the few productions of the year entirely unafraid to embrace its emotional core. There is no hiding behind irony or a sense of detachment here; these are real emotions that our Mr. Sample is undergoing, from giddy highs and crushing lows. That they are executed with such precision and discipline is enough to make one want to turn over tables and scream hosannas exclaiming to the world that yes, it is all right to go there as long as you earn it.

Which leads to Live‘s best weapon in reaching those hard earned emotions: The cast. A more exemplary collection of talent would be hard to find (though, this town is certainly capable); the performances are led by Ryan Higgins’ superlative turn as Doug Sample. Higgins has been seen in several stages around town during the last decade or so, making an impression in various productions as varied as Balagan’s Trout Stanley and Open Circle’s Ajax; although rarely has he had such a perfect fit for his talents as he does here. He delivers an electrifying central performance.

The same is true of the rest of the ensemble, and it would be largely unjust to single out a small handful of performers, as they are all stunning in this. Instead they will all be listed by name: Ashley Bagwell, Alyson Bedford (another welcome presence to return to Seattle’s stages), Samie Detzer, Katie Driscoll, Heather Gautschi, Corey McDaniel, Jason Sharp and James Weidman.

In short, this is a production that lives up to its ambitions, so much so that it is almost unfair to witness. Rawley is in top form, well served by his years of dedication to this script; while Theater Schmeater extends its remarkable 2011 run of productions. Live joins Seattle Rep’s The Brothers Size and On the Boards’ El Gallo as one of this year’s best theatrical events.

The remainder of the show’s run is sold out, rightly so. If you can get your hands on a ticket, don’t delay.