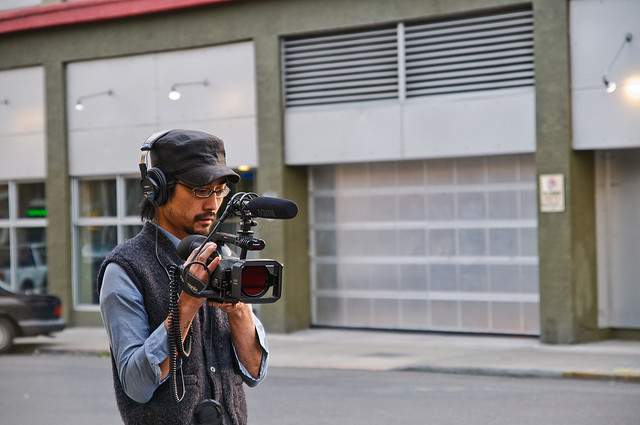 Despite the dissolution of the Washington State Film Commission, 2011 was still one of the most active years on the record, in terms of local film production, and a good portion of that were productions that either originated or were shot in Washington state. Though there are venues for local filmmakers to present their labors — ranging in size from online film festivals to SIFF’s programming blocks that are solely dedicated to featuring films by local independent filmmakers — it could hardly be said that opportunities to reach a large audience are plentiful in the area.

KCTS’s Reel NW, a program that’s a little over a year old, represents a rare chance to show a project to a potential audience that reaches most of Western Washington, extending all the way to Vancouver, BC; reaching that many viewers in one fell swoop is a goal that not many get to achieve. The program itself favors documentaries, from Jason “Sonicsgate” Reid’s Man Zou: Beijing to Shanghai, to Citizen Sam (about a quadriplegic city councilmember from Vancouver who was running for Mayor), but has recently expanded its boundaries in order to show film shorts.

This last Monday, Reel NW aired four shorts of local vintage, all four of which could be seen online through KCTS’ website. One was a documentary, another an experimental mood piece, the other two were narrative in nature. We’ll talk about the latter two last.

The program begins with its strongest entry, Mike Attie’s Famous 4A, a documentary about a unit at the Palo Alto Hospice Care Center in California known for its patients, all of them elderly, none of whom have diagnoses that give them much longer to live. What makes the hospice unit special is the amount of work they do to try to ensure their charges are spending their time there in a way that pleases them, within reason (the hospice’s de facto motto, as uttered by one of its patients: “Keyword is comfortable.”). As unobtrusively as possible, Attie’s camera encounters the unit’s staff and patients at their most revealing and engaging. We meet a charming man who flirts with his wife as he receives a massage (he’s a flirter this guy, a bartender when he was younger). We later watch him talking with someone from the clergy, where he straightforwardly explains that for most of his life he had no use for religion; he calmly and lucidly explains he is only talking to the pastor because it appeases his wife. We later see that this resolve has weakened somewhat in just a week, we also see that he is that much closer to death. The effect is stunning in its clarity; Attie has no ulterior motive in showing us these moments toward the end of a life, at least not a discernible one. Instead the delicate realities of death make their weight known simply by the observation. Famous‘ impact is as forceful as it is quiet.

Next on the agenda is the last short of the program, Ian McCluskey’s Summer Snapshot, a wee slip of a film about the day a group of young adults decide to go out to a lake and skinny dip. The film is an attempt to evoke nostalgia for not necessarily “a simpler time” but an ageless sense of freedom. To achieve this, McCluskey uses color soaked Super8 film and underscores images of (carelessly censored) youths cavorting in nature with clips of interviews with people who were there on that placeless day. McCluskey achieves his modest aims, engendering a fondness without having it attached to anything specific. A success, but not necessarily an enduring one.

We now come to the directly fictional portion of the program. There’s a danger that seems to be endemic in narrative shorts; the format is often plagued by filmmakers out to create a “calling card,” a means to leave an impression with prospective future funders or employers. This, in and of itself, is neither a positive or a negative — filmmakers who wish to be commercially viable have to use whatever tools they can get their hands on. The danger comes when filmmakers become more concerned with proving they can frame a shot, be in control of something that at least looks good on a bigger screen, to prove they are a technical master, that they forget one of the more important parts of making a successful narrative film: The Narrative.

Scripts are either thrown together at the last minute, or they aren’t given a critical eye toward meaning or emotional stakes or coherence. Often in short films, as in feature length films, the script is an amalgamation of cliches, character archetypes, cliched character archetypes moving from one basic beat to the next. The result is often something that at least looks like it was professionally done, but otherwise reminds you of a lesser Left Behind knockoff.

The argument goes that the money people don’t really care about a script, so why bother? The answer, clearly, is so that when your work is finally shown to an audience of non-financiers, they have something positive to talk about beyond the pretty pretty pictures.

In reading the description and director’s notes for Steve Edmiston’s The Day My Parents Became Cool it becomes clear that the film is the result of the filmmaker’s desire to provide the experience of working on a film to high school students. If there was collaboration between Edmiston and the students on every aspect of the film, including the scriptwriting, it isn’t clear. What is clear si that this project was about the simple creation and execution of it; the fact that it was made at all is supposed to be victory enough.

This is about the nicest thing that could be said for it, however. Whatever the decision making was behind the script, all it is is an extended and not-very-good riff on the throwaway gags seen in the episode of Buffy: The Vampire Slayer entitled “Band Candy.” Perhaps the story idea came from the kids at the school level (“One day, all the grown ups in the world started acting and dressing like teenagers”) — maybe one of them came up with the visual gag of having Obama sporting a punk hairstyle — but we have to assume that not much else did. We doubt high schoolers even from a couple of years ago would work in a 17-year-old Braveheart reference out of left field. Whether it was intended or not, Parents reeks of calling-card-ism; more thought was spent on storyboarding the shot selection than in giving the shortest thrift to the actual story. Maybe this was the intent all along, just to give kids the technical experience, but it doesn’t mean it should be seen by a wider selection of the population, especially as a representation of Northwest Cinema.

While far from perfect, Maria in the Kitchen, Nik Perleros’ and Laurel Minter’s contribution to the program, is an amiable enough experience for most of its running time. It aims for a quirky, humorous, quasi-observational tone and achieves it in the safest, most Hollywood, way possible. The result is a little affected, especially when we’re watching some borderline creepy behavior by Bob, the nebbishy protagonist — borderline for Hollywood, which we know would translate to simply creepy behavior in real life — but anyway, it’s a little movie about a recently retired confirmed bachelor who has a gorgeous waterfront home, a couple of seemingly typical drinking buddies, and who forgets he has a cleaning woman, the titular Maria. Things proceed predictably from this point, with Bob awkwardly learning to make friends with a woman, yes, even a woman from another culture, with moments of patented “bonding” and everything.

The film is shot and edited well, if a little too briskly; it looks good. The cast is filled with Seattle Stage regulars, so if you’ve seen a play in recent years, you’re going to recognize the majority of the faces on screen. Had the film decided to simply be about this awkward man becoming friends with his magical Mexican cleaning woman, it would have been a perfectly benign little movie. But, you see, mainstream entertainment has a thing about ‘character growth,’ no story is complete without the main protagonist having experienced a ‘growth’ moment. A time when our hero is at a crucible of some sort, where he must learn the error of his ways and correct it. Otherwise, he isn’t a hero; he is not someone we could identify with.

It is in providing this moment that Maria goes off the rails. It arrives at a lurch — let’s just say that one of the drinking buddies shows himself to be both a racist and a lout. From the moment that unfortunate scene begins all the way through to the end, forced beat after forced beat arrive with all of the subtlety of a 2″x4″ through the sternum. There is a brief respite when Bob decides to yell his now-former friends off of his property, that moment is inspired and out of left field. The rest of the closing moments are not, however, so that when you get to the final shot in the film, its hint of a serene aftermath does not feel earned.

As a program, Reel NW has proven its worth many times over since it began airing in November of 2010. Its schedule of airing a program at least once a month means that we’ll be seeing original works from this region on a regular basis. This seems to be one of the first times they have dabbled with narrative fiction in any way, here’s hoping it’s not the last. There’s an untapped resource of local talent out here, and Reel NW would be wise to continue showcasing it.