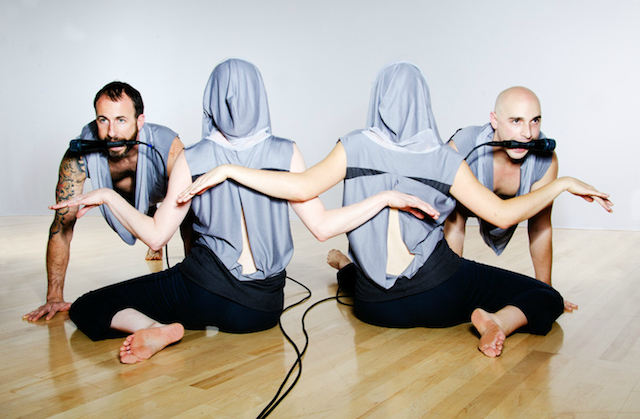 [/media-credit]
Sounds of laughing. At first from behind me. More laughter from the left, somewhere between a cough and a giggle, then from the right. Then from all over. I am immersed in a polyphony of laughs. The tone is somewhere between joking and threatening. The stage is black. The audience is silent.

By the time the lights come up on the stage for tEEth’s Make/Believe, it is quite clear this will not be an ordinary dance piece. Establishing the primacy of sound before the dancers have even appeared prepares the audience for the sonic onslaught that is still to come.

On the visual level, the piece starts innocuously enough, with the dancers beginning on all fours on a bare stage with four microphone cords, then moving into an interplay of animal forms before the first quartet dance begins. The lighting is flat and simple, the dancers’ movements compact and subtle. The costumes, too, show a certain restraint, with their dominant blue-grey tones, wide necks and singular broad band of color delineating the dancers’ inseams and groins.

In the manner of the best minimalism, however, it is the simple, subtle elements that combine throughout the piece to make something complex and remarkable. Using the barest of elements in extraordinary combinations produces visually and sonically striking imagery that grows and grows in intricacy, the way that music grows from the simplicity of a heartbeat, or language itself grows from scratches and dots on a Sumerian jar. Make/Believe is a succession of gorgeous images revolving around the idea of what it means to communicate, not only with others but also with oneself–or what one takes oneself to be. There is here a simplicity that at times borders on the primal–Noel Plemmons and Philip Elson cradling Shannon Stewart and Molly Sides in their arms, attached to the earth, is a ready example–but this is not simple image modeling. It goes well beyond.

An example of the imagistic richness will serve to illustrate. The quartet have broken off into two separate duets on the bare stage, but the hard lighting casts a square on the stage in which two dancers continue playing out a duet in which a man and a woman are trying to communicate, one with words the other with movements. But the movements do not match: as one person moves, the other gives words to what the first person does, so that the roles are roughly swapped, as in an elaborate Open Theatre exercise turned into a dance duet.

Later, in the darkness behind the foreground duet two dancers are wrapping a microphone cord around their heads: first their mouths–a direct metaphor for the blindness in the relationship being played out in the foreground–then their ears, then their mouths, as the level of communication degenerates to nothingness. The light goes down on the couple in the foreground and the two dancers in the background, rendered completely blind, deaf and dumb by the cord that now completely binds them as it blinds them, now begin their duet, connected only by the cord, giving themselves completely to trust. It is stunning and beautiful to behold.

The sonic explorations are just as lovely as the visual ones. Shannon Stewart’s solo is a particularly brilliant moment. With her best girlish mannerism, she moves coquettishly as speaks into the microphone. Her voice, however, goes through a signal processor, pushing it through at double speed, making her sound even more girlish but also quite extraterrestrial as she intones “I want to tell you a story about how I tell you a story.” It seems harmless enough, but soon her voice grows less and less intelligible, pushing into the real of pure noise. I mean that in the best way. From this noise, the patterns of her voice begin to loop against each other, growing ever louder and forming a pattern of vocal percussion that becomes the background music for her riveting solo dance as she goes quite literally in search of where her voice has gone.

This is dance of an extremely high order, filled with all the elements of music, theater, light and motion that only the best know how to assemble in such an elegant, seemingly inexorable combination. It is no surprise how or why tEEth won the Joyce Foundation’s 2011 A.W.A.R.D. Show last year, even edging out the excellent zoe|juniper. It contains more excitement in its hour-long duration than any five theatrical performances from around town and unlike much material around town, it also has the nerve–and the skill–to dare be about something. Seattle should always be so lucky.