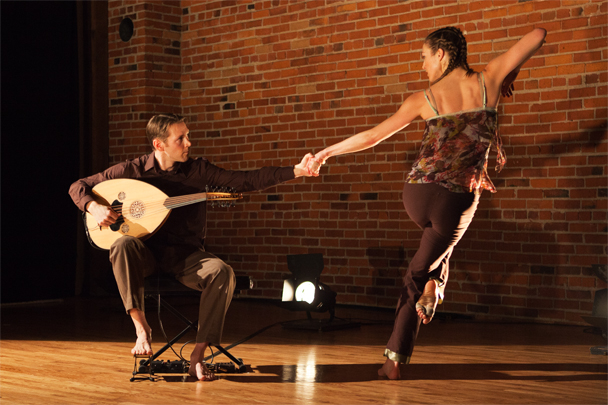 “To maximize the potential of existing and probable music, I needed to be able to make real-time modifications to written scores, to construct, deconstruct and reconstruct compositions and to change the pattern or order of sounds, and consequently, the larger form. The Conduction vocabulary made it possible to alter or initiate rhythm, melody, harmony, form/structure, articulation, phrasing and meter of any given notation. Once I established the Conduction lexicon, I could then eliminate notation altogether to pursue ideas based on collective interactive confrontations for the purpose of constructing composition in real time.” –Butch Morris

One of the difficulties of assembling an accurate history of jazz is dealing with the subject of improvisation. There is, for example, no Norton Scores: An Anthology for Listening for improvised music. Lacking a real system of notation, improvisation passes from teacher to student through direct practice alone and is difficult to reproduce.

Dance of course shares this problem, whether it is improvised or composed. While there are various systems of notation for dance–Beauchamp-Feuillet, Kinetography Laban, DanceWriting among others–these often narrow the range of expressive options rather than opening them up, the same way that the insistence on the “perfection” of a composer’s musical score has a petrifying effect upon classical music. Yet, with a bit of humility and a sense of playfulness, one can approach the subject of notation as a playground for inspiration.

What’s at stake beneath much of the discussion about notating improvisation and dance is subtle. Improvising musicians often like to feel special, a part of an elite class of initiates and certainly dancers are no different. Fear abounds on both sides that notation will destroy the spirit of music or the spirit of dance. Some of this is well founded. Much more of it is foolish. It is typical of performing artists that they avoid anything that might be called “intellectual.” As a performing artist, to be called “cerebral” is a type of death sentence, a way of damning and dissociating a person from the main body of their field of practice. I happen not to share that prevailing prejudice. Intelligence and an intelligent interest in more than one field are the guideposts to the most interesting things happening in the world, not just the arts but in physical sciences, anthropology, fiction, hypertext and much more.

Catherine Cabeen is an intelligent dancer. She’s known for being passionate, dynamic, vivid and beautiful–all of which is certainly true. What she is less known for is having interests that are not purely dance. In fact, some of her best work is cross-disciplinary: choreography for The Cabiri’s aerial show The End of Dreams, Kumani Gantt’s play The Gift, and her choreography for camera Earth/Pool, not to mention the obviously interdisciplinary recent piece, Into the Void.

Ms. Cabeen used to refer to her repertory show, Hyphen, as an “interdisciplinary repertory” in its earlier incarnations. In fact that was the origin of the title–stemming from critics’ propensity to refer to interdisciplinary works with hyphens (“post-dance” among other absurdities). She is content now to call Hyphen 2012 “an evening of new works.” But do not think Ms. Cabeen has turned her back on interdisciplinary explorations. If anything she has redoubled her efforts and incorporated them in much more subtle ways than before.

Composites, the oldest piece on the playbill, is a study of text. Particularly, it is an essay in how to turn text into physical movement. Beneath the obvious beauty of her dancing, Ms. Cabeen’s intellect is at work. Movements correspond not to full words or phrases or the meaning of phrases, but rather to a phonetic system from which phonemes are turned into gestures. Jay McAleer’s text operates on the level of literal and figurative meaning, beside which Ms. Cabeen’s movements form a parallel “text” of motion. It is a fantastic example that features Ms. Cabeen’s interest in that playground of inspiration between notation and freedom.

[/media-credit]The lovely 5 Windows returns to this playground to explore a different area: in this case, the boundaries of improvisation and composition. Here it is not text that is the basis but music: Ottoman (or Turkish, if you prefer) classical music in particular. Such music is, as is the closely related Persian classical music, built upon an intricate system of makam [Persian: maqam] and relies heavily upon improvisation both instrumental and vocal. Swapping the role of the voice with the role of the dancer gives Ms. Cabeen a solid foundation for play, allowing her as in a Butch Morris Conduction piece, “to alter or initiate rhythm, melody, harmony, form/structure, articulation, phrasing and meter of any given notation,” and even to go beyond such structure completely while still having a firm anchor in the relationship between dancer’s movements and musician’s phrases.

The fantastic Kane Mathis, a student of Ottoman classical music, on the oud here lays out something that, while not quite strictly Ottoman, nevertheless retains the improvisational feeling of taqasim. Ms. Cabeen converts the underlying structure of the makam into visual gestures from which she may lead or accompany Mr. Mathis’ own musical gestures–and at times even his physical gesture will open a moment of interchange with the dancer. The closeness of their understanding is remarkable and beautiful, making this a truly inspired piece that one can easily appreciate without an understanding of either taqasim or dance notation. Even on its most superficially visible level, 5 Windows has a sensuous and visual appeal that ranks with Ms. Cabeen’s best work.

This interchange between musician and dancer is also featured in both On the Way Out and Gravitas. In On the Way Out, it is not togetherness or creative interplay but rather alienation that guides the piece. This is a piece is which the dancer exists visually in her own world. Sarah Lustbader’s dance alternates between tender, languid, sensual and melancholy. Above all else, however, it is remote. Framed literally by a door jamb on the extreme stage left, bathed in a warm yet hard light, her dance defies completeness. Coleridge once described a certain actor’s performance as “like reading Shakespeare by flashes of lightning.” This is similar to watching Ms. Lustbader dance. It is impossible to see all of it from anywhere in the audience; even from the “privileged position” of the musician (the multifarious Kane Mathis again, this time on kora). It is, at times, deliberately frustrating–and no doubt feels exactly the same as watching a lover walk out the door for perhaps the last time.

I’ve written about Gravitas already in its solo version at the BOOST Dance Festival last weekend. I was, however, struck by the difference than Brian Chin’s presence adds to the piece. In a way it is the inverse of 5 Windows: where that dance used cues from the musician to form its vocabulary, this version of Gravitas uses the cues from dancer Karena Birk to form the musician’s vocabulary. The correspondence is not one-to-one. That is not a problem, but a strength. It frees both the dancer and the musician to be even more creative, yet no one would ever accuse this piece of being “too cerebral.” It is visually gorgeous and an excellent showcase for the lovely Ms. Birk and her ability to defy the laws of physics in the most sensuous way.

On another tack, All of the Above is not so much a call and response piece as the others. Rather than exploring the possibilities of the duet (even Composites is a sort of duet with the text–it’s represented by the pile of paper on the floor, after all), it is a piece for a quartet of dancers. Nevertheless it is quite similar in many ways to Gravitas. Gravitas is a piece that is itself a kind of dialogue between gravity and propulsion, earth and air. All of the Above is much more about the air, points of contact, suspension and all of the above things but it too relies heavily upon the support of the earth. It is a very intricate piece with lovely interplay between the dancers. The only thing puzzling about the piece is its location in the programme. I think it suffers being nestled between the sensual 5 Windows and the emotional On the Way Out; I believe it would be better served by being third on the evening rather than second. Still, this does not take away from the piece itself.

Catherine Cabeen’s work is, like the work of zoe|juniper, a testament to the belief that dance can be intelligent and provoke not just emotional responses but thoughtful responses as well. Where many choreographers and dancers are content to approach dance as either a reason to create visual imagery or to turn motion into emotion, Ms. Cabeen prefers to probe more thoroughly. She is obviously a woman who thinks deeply about dance not simply from the physical point of view but from the meaningful point of view as well.