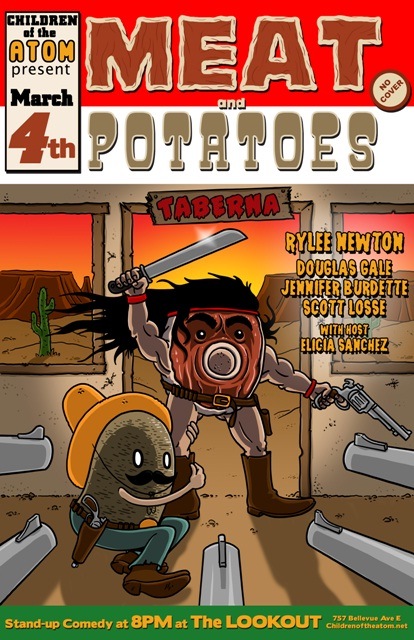 I’m a curvy Irish girl, and, as such, I tend to stay away from carbs after 8:00p.m., but I made an exception recently for some Meat and Potatoes.

I was hungry for food and comedy and was thoroughly sated by both at the Meat and Potatoes Comedy Show at The Lookout on Capitol Hill.

At the first show I attended in January, I enjoyed my steak and potatoes special, sat back with a beer and a poochy tummy, and enjoyed the dry wit of Chicagoan Wilfred Padua; Jane Borden – a stand up comic and author of I Totally Meant to Do That; Danielle Radford – a hilarious comic and great story teller; and headliner Travis Vogt, who is one half of the brilliant sketch comedy duo “The Entertainment Show” – all led by the charming and funny host, Corbett Cummins.

The March show was just as packed with goodness and featured the subdued, but very funny, Scott Losse; the wry comedy stylings of Jennifer Burdette from Joe TV’s “Funny or Die;” the hilarious Douglas Gale – co-host of the Delicious Mediocrity podcast; and headliner local Rylee Newton of Comedy Central Premium Blend and Jimmy Kimmel Live! whose self-deprecating humor was awesome – all hosted by the lovely and talented Elysia Sanchez.

This tasty night of comedy occurs the first Sunday of every month at The Lookout, which is tucked away on a residential street on Capitol Hill. It’s a charming, cozy little bar with a great beer and food selection (there’s also a veggie burger on the menu, for the meatless among us).

And now that they’ve added in some fantastic free comedy? I say screw my diet, I’m going again. You should go, too (but save me some steak…or I will find you…)