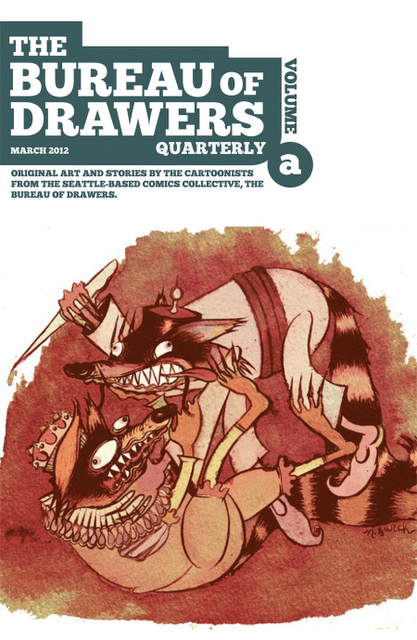 [/media-credit]The 80s and 90s were a peak time for comix zines in Seattle. It’s no secret, of course, that I am a great admirer of The Seattle Star under Michael Dowers, which began this wave, but many more zines, tabloids and mini-comix followed. Some truly brilliant work came from them–Jim Blanchard, David Lasky, Dame Darcy, Steve Willis, Ellen Forney and so many others–and readers like me picked them up faithfully.

What drove that wave of comix was a combination of the availability of copy machines and the relatively low price of offset printing. What spelled the end of that wave was a combination of things but certainly the rise of the Internet was a major contributor. As graphical user interfaces became ubiquitous and bandwidth exploded for the average home computer user, anything paper-based became comparatively expensive. Ambitious projects like Sarah Byam’s Glyph magazine at the end of the 90s became orphans, stranded between the new world of online webcomics and the fading realm of print.

Now that bandwidth has hit a safe plateau where consumers can download massive picture files at will, it makes sense that someone would bring back the free comix tabloid. That is exactly what Seattle’s Bureau of Drawers have done.

You may be wondering “Who is the Bureau of Drawers?” There is no single answer but the easiest description is a loosely knit, Seattle-based collective of cartoonists and illustrators with a love for comics and sequential art, who work in various media in many places around town, from their weekly “drink ‘n’ draw” at Cafe Racer to decorating entire walls in an evening for the Greenwood Art Walk.

The Bureau of Drawers Quarterly is an “all-new, all-digital and completely free anthology” according to the Bureau’s website. The inaugural issue, available for download from their site, features a wide range of styles and stories. From the fairy tale illustrations of Amanda Robinson to the absurdist work of Marc Palm, the artwork on display is formidable and provocative. The stories range from simple (Katherine Grems’ “The Golden Princess”) to rather more intricate (Stevie van Bronkhorst’s “Alan Tries Harder”) and are just as striking as the graphics on display.

It is a fine beginning and a subtle connection to the rich history of comix in Seattle’s local papers. Even at their nadirs, the weekly and bi-weekly newspapers of Seattle have excelled at bringing alternative comix to the public. Strips like Underworld, This Modern World, Ward’s Cleaver, and Troubletown owe much of their fame to their presence in the local pages. The Bureau of Drawers Quarterly continues and, I hope, will improve on this tradition as Seattle’s alternative comix move from their foothold in the world of print to the much more open world of the Internet.

Available for download from The Bureau of Drawers, http://thebureauofdrawers.blogspot.com