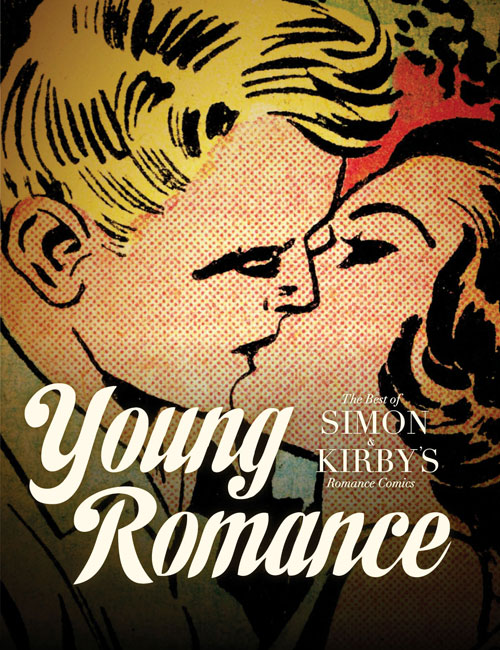 Here’s a measure of how much the comic-book world changed after the war: The very first romance comic-book, Young Romance, in 1947, was the brainchild of Joe Simon and Jack Kirby—the same team that had brought so much vitality to the super-hero comic books a few years earlier. So far had the mighty fallen. – Harvey Kurtzman, Creator of MAD

That snide comment from the great Harvey Kurtzman says volumes about what is wrong and has been wrong for a very long time with the comic book as an art. For decades before the American comic book itself imbedded itself firmly in popular culture, both women and men, girls and boys read the comics in the paper. If one believes Trina Robbins’ research, this continued to be the case even in comic books themselves, especially true of John Goldwater’s Archie Comics publications. Female readers were important and so were comics stories with and about females.

The implication within Kurtzman’s statement is that “vital superheroes” were the apex of comic book writing and that romance comics were beneath contempt for any artist of Jack Kirby’s stature; in short, “girlie stuff.”

Fortunately Jack Kirby and Joe Simon did not share Kurtzman’s belief. While boys like the young Kurtzman might have resented the turn away from superheroes and wondered how their idols could possibly have sunk so low as to tell stories about girlie stuff, the move certainly makes sense. One can always point to the decreasing value and quality of superheroes in the market for various reasons (such as five years of war had shown plenty of heroism already) but the reality is that Messrs. Simon and Kirby wanted to do romance comics. Both of them certainly had read the romance pulp magazines of the time: why not adapt those stories to a visual medium? And why not accept a new challenge as an artist?

At the end of World War II, with soldiers returning from long deployments, romance was in the air. Or so the legend goes. More accurately, though, a return to simple reality was in the air. Romance comics were the height of American realism in comics.

This may sound bizarre. But it only sounds bizarre because romance comics have long been deplored as cliché-ridden pabulum “for girls” and not worthy of study–an attitude encouraged by the fact that histories of comics are largely written by male fans of superhero comics. Even the official Fantagraphics release for the Simon and Kirby exhibit states “Unlike previous comic book genres, the work appealed primarily to women readers.” And yet what could be more realistic than returning GIs coming home to settle down and raise families and begin the “Baby Boom”? Conversely, what could be less realistic than adventure stories? To quote Pierre Comtois and Gregorio Montejo from The Jack Kirby Collector:

After all, how realistic is it that a reader would encounter savage Indians, bug-eyed monsters or costumed supermen in their day to day lives? Uncluttered by such unrealistic distractions, romance comics are free to explore the more quiet drama of real life–the incidents, heartbreaks and human conflicts that are actually encountered in the lives of their readers.

That is the gentle version, of course. There is a dagger within: behind that “quiet drama of real life” Messrs. Comtois and Montejo mention is the same energy that drives the one of the darkest, harshest looks at human nature that Americans have ever contributed to the world: the world of film noir. Film noir itself deals with realism, American-style, and the concerns of returning American GIs: women with careers who will not be tamed, relationships destroyed by unfaithfulness, sexual manipulation, racism, crime, fatalism and death–in fact, the very things present in romance comics and present certainly in the pulps that precede them. The pulps are, after all, also the primary source of film noir stories.

If you still doubt this, you may read a preview sample of the Young Romance comics “Fraulein Sweetheart” and “Shame” that are available from Fantagraphics as part of the gallery exhibit and free for download as a sixteen page preview. You will see that the themes are the same, even if the treatment is slightly different. There is a social conscience present in the Simon/Kirby romance comics that might surprise many readers who have dismissed the genre outright. Again, to quote Messrs. Comtois and Montejo, “It is our contention that it is they that are the true ‘mature’ comics in the field.” The creators themselves seemed to think so. Right there on the cover of Young Romance #1 is printed what is possibly the first “For Mature Readers” label in history: “Designed for the more ADULT readers of comics.”

This is a chance to recover a lost bit of history. With the hands of Michel Gagné as curator, one could hardly ask for a better guide. He will be on hand to discuss his delicate restoration process at the opening reception on Saturday, April 14. This offers a fantastic opportunity to talk with someone who knows the work of Jack Kirby perhaps better than anyone in the world.

A simultaneous exhibition will display enlarged examples of Messrs. Simon and Kirby’s romance comics and examine the creative process of these American masters. This is the work that Roy Lichtenstein shamelessly ripped off for his Pop Art pretension which Art Spiegelman quickly described as doing “no more or less for comics than Andy Warhol did for soup.” Fantagraphics is offering you the chance now to trace the stream to its fountainhead. Take it.