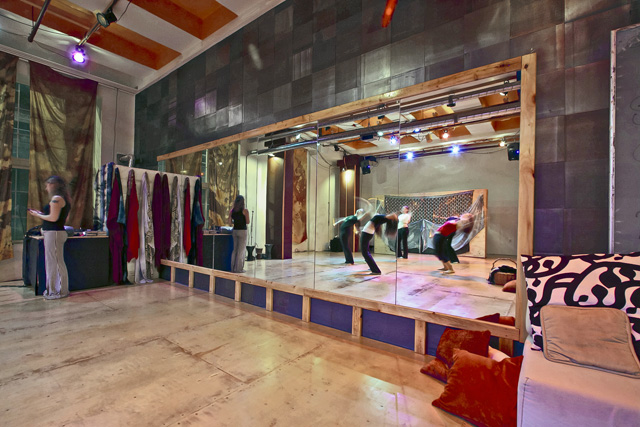 [/media-credit]”Being a good dancer and a good dance teacher is not enough to make you a good business owner,” says Tin Can Studio owner and operator, Kendra Hayes. At this very moment, she’s siphoning homemade beer through a clear vinyl tube from a ten-gallon bucket positioned on the counter above her head. The fermented amber liquid flows down through the clear tubing into freshly sanitized bottles. “As artists and spiritual people, we tend to shy away from things that feel like self-interest. We’re always so concerned about other people’s feelings and other people’s needs that we feel it’s wrong to go after what we want for ourselves in order to succeed.”

Finding Tin Can’s new owner and operator bottling her homemade beer during the studio’s off-hours is an irony lost to no one. “In business, to keep this kind of place alive for other people to enjoy means that I do have to exercise some good business sense,” says Hayes.

In August of 2011 Tin Can Studio established itself in the thriving artists cooperative housed in the old Rainier Brewery east of Sodo. You know the place: the one crowned with the big green Tully’s “T” now. Hayes will be the first to admit that, unlike her mastery of bellydance and fitness instruction, her brewery skills are still in a process of refinement.

“I was 30 years old when I took my first bellydancing class. I came home from that first class saying, ‘I know what I want to be when I grow up.'”

Hayes tops off the last of nearly two-dozen bottles. All well and good as she’s hit the silt at the bottom of the bucket and now it’s time to start hand-capping the bottles. “It felt like coming home after having been away for a lifetime and realizing, ‘This is what I was born to do…'”

There’s something terribly satisfying in hand-capping homemade brew. After setting a fresh crown cap over the bottle’s mouth, one slides the capping device down onto the bottle neck and with one clean motion of the device’s handles it’s a clean and perfect fit every time. Not unlike Hayes’ connection to the essence of bellydance.

“I was originally attracted to bellydance after I saw a group of women performing together in the Fremont Solstice Parade,” she recalls. “Their camaraderie and the connection that they had with each other really, really spoke to me. I wanted to experience that and that was why I started dancing.”

Not surprising, Hayes became a bellydance instructor herself, holding classes in the front room of her home in the Central District and eventually forming her own troupe. “I started Hands of Kali because I wanted to dance with some of my sisters and so I recruited some of the women with whom I’d been taking classes.” Over time she drew on her own body of students to form a second troupe, Adderstone, a group Hayes says has moved beyond a crew of novices becoming a solid, professional troupe in their own right.

Hayes take on bellydance flies in the face of tradition, infusing everything from western pop to Goth, metal and rap–nothing new to the well initiated, but Hayes says at her core she remains true to the art form’s fundamentals. “I have taken some flack from traditional bellydance purists for not being traditional enough…but I feel that my work as dancer is about connecting to the original source of the dance. The deep and underlying truth about bellydance is that it is a folkdance–it was created by ordinary people for ordinary people. They created it because they wanted to express what was in their hearts and to connect with their own divine sources while connecting with each other. That is why it was invented. It’s a folk dance and we are the folk.”

In keeping with her art’s humble origins, Hayes and her husband Michael White Hayes drew their new art space’s moniker from a similar pool. “We were very deliberate about choosing the name Tin Can Studio. A tin can is a simple, common thing but it’s a very useful invention,” says Hayes. “It revolutionized the way people feed themselves. Tin Can Studio is like that tin can because art feeds people’s souls.”

“We really wanted to evoke a thorough sense of dance and fitness and art–something for everybody,” she says, capping several bottles in speedy succession. “Michael and I are very DIY about the way we do things, we’re very blue collar. But we’re artists, too, and we really feel that art belongs to the people and that everybody should have it.”

Upon entering Tin Can Studio’s 1400 square-foot space with its sprung dance floor and yawning ceilings one’s eyes are immediately greeted by a color scheme of deep oranges and rich blues. The place hums with a fertile energy. Many cannot help but comment on how very warm and inviting they find the space.

[/media-credit]Within a few short months of opening, Tin Can Studio became a bustling working art space supporting a wide spectrum of instructors and subject matter beyond just bellydance. At present the Tin Can curriculum sports everything from aerial workshops with Miss Goody Goody, puppetry classes by Rachel Jackson of Vox Fabuli to the art of Tango by Gabriela Condrea and Tim Shaw as well as regular musical, Improv and burlesque events.

Embracing a clear and utilitarian vision for their studio, the Hayes chose a very succinct brand: “Art and Fitness for All.” But said vision reaches far beyond the mechanics of the physical realm and deep into the spiritual. “Tin Can Studio was intended to be a teaching and performance space but that is not the end of it all,” says Hayes. “This place is a temple or a church if you want to think of it that way. It’s a place where people come to get their souls fed and feed themselves on the best things that life has available for them…and I think of myself as a priestess.”

From her first bellydance class, Hayes was frank and vocal about her personal path through art and enlightenment, she writes about it at length in her self-published biography Stomping Ground (2009) and shares that vision each day she sets foot in Tin Can Studio.

“I sound like I’m wanking myself off here,” she laughs. “It’s very important to make a distinction between Goddess and priestess. Goddess is in charge but a priestess is a servant who gives to the people of the community to help them discover opportunities to find their way to the divine. So that’s how I see my role as a dance teacher and a performer and a studio owner. This place exists for the people who need it.”

Hayes breaks the rhythm of her bottle capping, becoming a bit introspective as she digs into a paper bag for another handful of fresh bottle caps. “Whatever you think of as God…whatever you consider to be divine whether that’s Jehovah or Mother Nature, Buddha or Gaia, that divine source is your life force. It’s what gave you life. It’s a creative force and it created you.” She pauses and a smirk stretches over her lips. “I didn’t go to art school, so hopefully I don’t sound like an art school poseur when I say this, but art exists because we need it as a race. Our lives would be fully incomplete and meaningless without it. When we engage in a creative activity we are mimicking our own creator and we are searching out our own source of life and responding to that. This creation thing is clearly something deeply embedded in all of us, it’s a part of what we are, it is basic to our nature and it is fundamentally important to our existence.”

The hour is getting late and all Hayes’ brew has been bottled and capped. Behind the glass of each re-purposed bottle the yeasts are busy at work priming the sugars and altering the concoction into something heady, effervescent and full of intoxicating potential.

Not unlike Tin Can Studio.