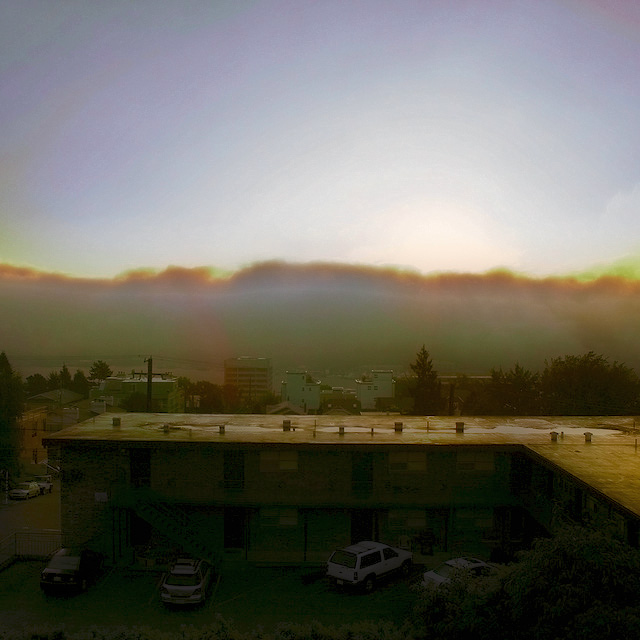 [/media-credit]How do you know where you are? Not in the grand philosophical sense, but here, in our Sea-Town? Imagine being dropped blind-folded into one of our neighborhoods. How long would you need to figure out where you were without checking street signs? How particular is the character of our neighborhoods? How clear is the line between a recognizable landform and your eye? Can you see the Olympics? Where is Lake Union? Is that the steep grade of Queen Anne Hill?

I know where I am when I walk my home neighborhood of Capitol Hill and love it. My street and the streets around mine blend small, vintage WWII apartments, lots of five-to-ten-year-old townhouses and condos, and a smattering of centenarian houses.

Residents of this neighborhood choose to live here because they can walk to everything. For example, five grocery stores lie within a 6-block radius. The proximity of buses and services means that residents can sleep and garden and play on their quiet, residential streets and, in a matter of minutes, reach the pharmacy, restaurants, shopping, downtown, and entertainment. The neighborhood is racially diverse, zoned multi-family. Residents know each other well because they are out in the neighborhood, as pedestrians, as gardeners, as friends. Idyllic. This is the sustainable model the city is after and yet the mayor wants to alter its zoning regulations.

Mayor McGinn submitted his “Regulatory Reform Proposal” to the City Council in February. The proposal includes seven amendments to zoning and environmental regulations including allowing commercial uses in Low-rise 2 (LR2) and Low-rise 3 (LR3) zones in urban centers and near light rail stations.

Councilmember Richard Conlin, Chair of the Council’s planning, Land Use, and Sustainability (PLUS) Committee hails McGinn’s proposal to allow commercial uses on first floors of these LR 2 and LR3 residential streets as a return of the corner store, but could be described as disingenuous on this front since the possible businesses could include not only mom-and-pop groceries, but such enterprises as shoe repair, food processing, even mortuary services. In addition, businesses would not be limited to corner lots, but could be located in a row of storefronts just like those in commercial zones. Outdoor seating for restaurants would be allowed anywhere on a lot. Residences in current commercial zones have more stringent protections (50 feet from outdoor seating).

No parking would be required for these commercial uses. Although the proposal is touted as facilitating “improved access to goods and services without the need to drive,” it would allow commercial uses that would not serve local residents, such as wholesale food processing and medical laboratories that call for vehicle traffic.

I think the mayor and City Council are mis-aiming. Neighborhoods that might welcome corner stores are not those outlined by the proposal’s current map but those that are thick with single-family residences and are more than six blocks away from a business district or bus line—where people hop into cars for most everything and don’t have all the conveniences a short stroll away.

Some in city government heard from Capitol Hill residents at the May 9 City Council committee meeting and the mayor’s Q & A, May 8 at Seattle Central Community College. Mayor McGinn and Councilmember Conlin support the proposal. Other Councilmembers are harder to peg at this moment. A member of the newly formed neighborhood-action group, currently dubbed the Capitol Hill Integrity League, recorded these observations: Tim Burgess says that he and others on the Council wrestle with what is the best thing to do and that he recognizes an implied compact—that the city protects multi-family residential zones when it ups density. Sally Clark sees that folks want to return to quiet when they go home, and also have shops and such nearby. She shares the concern of many of the neighbors that some missing teeth in the commercial zones could use attention before new commercial space is made available outside of those zones and wonders whether spreading commercial into new areas might dilute what the city really wants, which is healthy business districts.

A separate, related issue is that the city has not included residents in their planning but has included many developers and that the proposed legislation favors developers. (The proposal planning meetings were closed to the public.) The idea is familiar during economic hard times: jump-start better times with some construction job creation. However, developers have less interest in sustaining the individual character and history of each of Seattle’s neighborhoods, those markers that tell us where we are.

Capitol Hill may be about to lose two 1890′s houses—one in very good condition and the oldest structure for its part of the city—to a four-storey, thirty-one unit building. A neighbor on the block to the site’s south says, “I work for developers and I think this is wrong.” (The houses sit on the ridge top, a site unlikely to be given to low-income housing.) Over the last five to ten years, the two-block radius from these old houses has seen five or six houses turn into about fifty town house units. Density in this neck of the urban woods exceeds the city’s goal for several years from now. Increased density is a fine thing but not at the expense of sound, attractive and interesting structures.

With the new proposed zoning laws, stream-lined for developers, such houses could be lost very quickly with little or no public comment. Councilman Mike O’Brien says, “… some changes could take away the power of communities to hold developers accountable to state environmental law.” About an upcoming PLUS committee meeting (May 23, 9:30 a.m.) O’Brien says,
“We will … spend some time taking up the SEPA (State Environmental Policy Act) issue, which is a tricky one. On the one hand, there are some types of developments that we would like to encourage and I am inclined to remove barriers to make it more likely that these will happen … On the flip side, there are types of developments that we typically want to discourage, and we would like to keep tools in place to be sure all of our concerns are addressed before these projects proceed … We are working to see if there is a way we can meet both of these objectives.”

Oh, Sea-Town of mine, try not to lose your soul and your skin to save your wallet.

Public testimony will be taken at the beginning of the May 23 PLUS meeting.
Letters to the Council may be sent to: Seattle City Council, PO Box 34025, Seattle, WA 98124-4025 or emailed to council@seattle.gov.
Video of the last PLUS meeting, May 9. Watch from 30.30-40.84
A neighbor describes the 1890’s structures, with photos here