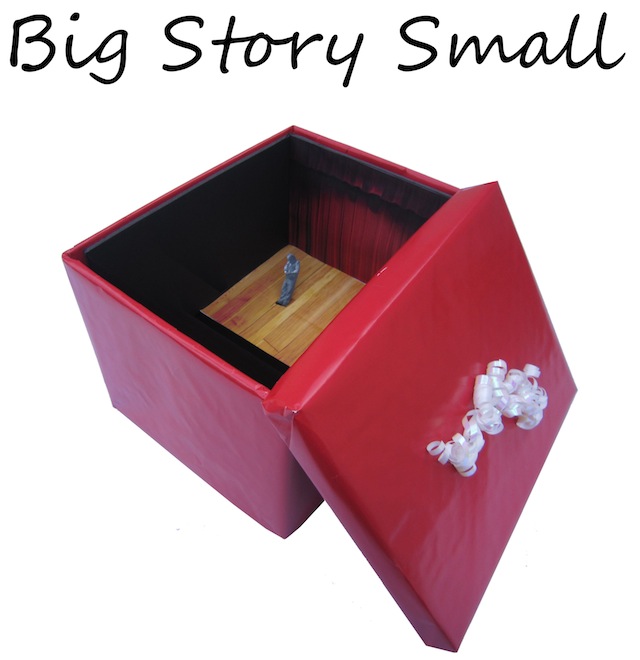 [Correspondent’s note: Due to this production’s shortened theatrical run, this critique is based on a special press preview which was held a few days prior to opening night, and thus reflects the opinions gathered before the full production was ready to be seen by the public.]

The idea behind Pony World Theatre’s Big Story Small, which runs this weekend only in the ID’s Theater Off Jackson, is pretty ingenious: Take a classic work (past examples include plays by August Strindberg, Christopher Marlowe, Arthur Miller, Ionesco, etc.) and condense it to fit under 10 minutes; collect a number of these, assemble a production team for each play, and then present it to an audience. This procedure is not new, and it isn’t surprising to learn that other theater artists have taken to repackaging older texts and presenting it in concentrated form.

One of the better known examples of this comes from no less an influential playwright than Tom Stoppard, whose 15 Minute Hamlet has become something a staple in colleges and high school theatrics around the world. Initially written for BBC Radio 4, Stoppard sought to tell the story of the moody Danish prince, hit all of the famous scenes (the haunting, the betrayals, ‘get thee to a nunnery’, and so on) in as abbreviated a fashion as possible. Stoppard succeeded, in a sense, as long as one kept in mind that he intended the resulting production to be comedic; in the process, he revealed the main challenge in taking on such an endeavor: not diminishing the impact and power of the original text while reducing it to its basic components.

In other words, when condensing the source material, it is important to ensure that the qualities that made that text stand the test of time are still a part of your projects DNA. Pony World’s approach in Big Story Small is multifaceted — some pieces are faithful, others satirical, others still use different media — but they are all generally reverential of their source material, to varying degrees of success. When the adaptations work best, they not only fulfill the intent behind the original piece, they also whet the appetite to see a full fledged production of same.

The few times when a piece did not deliver the desired effect seemed due the experiment not quite doing the material justice, and not because of a lack of reverence from those involved. Overall, however, the selection of plays that Big Story Small tackles represent a fairly broad range of theatrical styles, from abstract political theater, to traditional classics; something that is very much to be commended.

The evening begins with Gavin Cummings’ take on Euripides’ Medea, which sets the experimental tone for the evening. Cummings uses puppetry to tell a moody and wordless variant of the Greek tragedy, replacing the the mythical gods with crows and owls, while the action becomes quite abstract as a consequence. The result is nonetheless quite evocative and poetic due its simple and haunting visuals.

Next comes Scott Herman’s distillation of John Synge’s The Playboy of the Western World, which vies for Kelleen Conway-Blanchard’s adaptation of Saint Joan as least reverential treatment of the source material. Under Shawn Belyea’s direction, the treatment greatly amplifies the ridiculous underpinnings of Irish societal norms, and having great fun with the language and more melodramatic occurrences in the original play.

The abridged version of Camus’ The State of Siege, by the producing company, is perhaps your correspondent’s favorite of the performance viewed. A precisely drawn adaptation that distills Camus’ various points to a potent clarity; some might argue that it greatly simplifies the playwright’s political screeds to a blunt edge, but the process makes those points and abstractions, the dark humor and cynicism of the piece, all the more accessible, giving the piece a greater power. The only downside comes from the realization that there isn’t a company in town that might be willing to take a chance on a full production.

[NOTE: Next on the program is Seattle stop-motion animator Webster Crowell’s version of Eugene Ionesco’s Rhinoceros, which was presented in an incomplete form during the performance. What was seen, however, proves that deciding to animate the play isn’t really that far fetched, as it renders the characters’ transformation into the titular animals quite effectively. As presented, it is difficult to say whether the overall presentation serves Ionesco’s absurdism wholly. Perhaps if the final product becomes available online, a verdict could be reached.]

The final piece of the first act is based on Bertolt Brecht’s Mother Courage is a difficult one to encapsulate, because while the playwright (Lucy Winfield) and the production team approach it with the requisite Brecht-ian distance, they have added additional distancing effects (in the form of the playwright commenting on Brecht, while Courage‘s characters are represented by actors holding pictures of the characters on pieces of cardboard) that render the piece almost entirely out of reach. We have Brecht’s story and characters, who are already meta-aware, then we have Brecht commenting on those characters, then we have Winfield commenting on Brecht, his characters, and how Brecht relates those characters to the audience…It’s all a bit too self-referential; and yet, as the play ends, and Mother Courage feels the weight of the repercussions her cunning has wrought, pathos is achieved. So, success? Success, though it could have gone either way.

After intermission, Samuel Beckett’s Waiting for Godot takes the stage; the conceit behind Shawn Belyea’s adaptation is simple, Godot is excerpted so that it is presented as a greatest moments compilation. Vladimir and Estragon think about leaving, decide to continue waiting and then the scene fast forwards through some action before landing at the next conversation about-/decision to- wait. These transitions are aided with the use of a strobe light, and the accompaniment of jazzy renditions of Raymond Scott songs. Pozzo and Lucky arrive, do their shtick and leave. The piece progresses like this, accentuating the clownish characteristics of the play; it is sometimes a bit frantic for a play about existential waiting, even if it is condensed — but something magical happens when night falls. These are done as transitional passages through time, without a strobe light and jazz score, just a light shift and chimes in the background (and a clever scenic design that is both beautiful and enchanting); in this way, the weight of time passing is conveyed and the piece becomes whole.

Kelleen Conway Blanchard’s take on St. Joan explores the deeper themes in George Bernard Shaw’s script by underlining the more absurd aspects of the play. The King is nearly Mel Brooks-ian, the Queen every bit the sexpot, the priest just as much a callous opportunist. The way in which these characteristics are concentrated is very much a Blanchard trait, and it really comes through in the Joan of Arc character, who is given to making prophetic announcements in the most outsized way possible. As irreverent as The Last Playboy earlier in the evening, but all the more revelatory as a result.

Of all of the plays in the evening, Joyce Carol Oates’ Ontological Proof of My Existence is the one that your correspondent is the least familiar with; because of this, it is difficult to say whether Gabrielle Schultz’s adaptation is effective, though it is an intriguing puzzle. There are three women onstage, though they could be playing the same woman and they might be living in the same moment, just describing different viewpoints of those shared moments. She (they) seem to be defending their decision to stay with an exploitative man, while slowly becoming that man. Researching the play online at least confirms some of this, perhaps one of the more enterprising universities in the area will mount a full-fledged production in order to shed some light on the matter. As a puzzle, it beguiles.

Finally, the evening comes to an end with Brendan Healy’s adaptation of Anton Chekhov’s The Cherry Orchard, which cuts away swaths and swaths of Chekhov’s dialogue in order to accentuate the classist critique that is but a portion of Orchard‘s scope. Healy doesn’t eliminate the sympathetic aspects of Chekhov’s script, far from it, but in consolidating the material, it makes the main characters’ avoidance and inactivity the focus of the piece. It is clear that these people would rather ignore the impending cataclysmic change and live in a past that is quickly slipping their grasp, but their desire to simply do nothing about it and merely hoping the problems would go away just ends up hurting them in the end. Healy’s treatment nimbly replicates the feeling that the end is inevitable, while supplying just a taste of why these characters’ pasts and fantasies are so enthralling. The piece ends on one of the many arresting images that the production supplies throughout its running time.

Which is emblematic of the entire production; it is easy to see that these artists care about the plays they are covering, and their enjoyment is infectious. These are talented actors, playwrights and directors — even when their experiments don’t connect, they are striving to successfully convey the meaning of the source material, and that effort is well beyond commendable. While these are no substitutes for the real thing, they do provide for an wholly engaging and enjoyable evening at the theater.