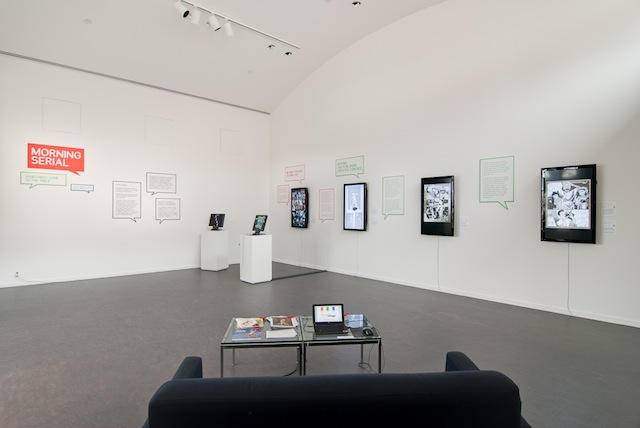 [/media-credit]
Comics have always had an uneasy relationship with museums. Museums tend to canonize work that is based upon privilege–upper class and bourgeois privilege especially. Comics do not fit comfortably into this type of elitism. They are above all else a “mass medium” as Wolfgang Fuchs once noted. They are intended for copy, intended to be shared as widely as possible, intended to cross social class and intended for the literate and illiterate alike. On a real level they are the very antithesis of the culture of the masterpiece around which museums have been built.

What is true of reading printed comics is equally true of reading comics on the Internet, with the added degree of difficulty that stems from the distractions endemic to reading at a computer. How much more difficult then for a curator to attempt to translate the experience of reading webcomics to a museum gallery. Morning Serial: Webcomics Come to the Table, curated by Sarra Scherb for the Henry Art Gallery, shows how difficult it is.

My problems with the exhibit begin with the title. It is pure kitsch. A stupid pun that has virtually no relation to the subject matter at hand is a poor start for educating a public about webcomics or anything else. Even if I were to accept the cliché image of a 1950s male sitting at the breakfast table in his suburban home, eating hot oatmeal–the analogy is insufficient and illuminates nothing. I also happen not to believe it as at least three surveys I have read on how people access webcomics imply that people most definitely do not access them on a Kindle or iPad or other tablet and most definitely not at a breakfast table.

Furthermore, the title implies a broad treatment of the subject: not a specific aspect of webcomics, but webcomics in general. Given the incredibly small space of the upper gallery, anything comprehensive is highly unlikely. I’m aware that Ms. Scherb intends “a focused selection of comics exemplary of the possibilities unique to webcomics,” as she writes in her notes but the title gives no indication of this or of any particular level of seriousness in the selection.

The stated themes of the exhibition are Beyond the Page: Technology, Beyond the Publisher: Creative Control and Beyond the Physical: Digital Exhibition and a mini-site based upon digital exhibition runs online concurrently with the exhibit to return the materials into their proper domain. The Technology theme treats how webcomics are created with new tools and may now also expand the ideas of what constitutes a webcomic “page” and what constitutes “reading” a comic that is no longer tied to physical materials. The Creative Control section discusses the issue of auteurism and the possibilities of comics created with a singular vision rather than by assembly line. Digital Exhibition discusses the traditional assembly line method of corporate comics from DC, Marvel, Archie and the usual pretenders to their throne and the revolutionary difference of being able to bypass the assembly line to deliver directly to readers.

The difficulties of selecting materials from the absolute panoply available are immense. But Ms. Scherb’s selection is extremely Anglocentric. For an exhibit to imply that the Internet is a viable medium and distribution method for comics and then to ignore the reality of internationalism seems very bizarre. I might look the other way if a curator excluded materials that were not in English, but many European and Asian comics offer simultaneous English translations; this is in fact the whole point of one of the webcomics Ms. Scherb has already chosen, and the only one by a Brit–Daniel Merlin Goodbrey’s Mr. Nile Experiment. Is it coincidence, also, that the two interactive comics Ms. Scherb has chosen–and the two most interesting–are both from outside the United States? In her attempt to link the webcomics “movement” with the American underground comix of the 1960s and the American alternative comics of the 1990s, Ms. Scherb’s curatorial text glosses completely over the realities of non-American comix which have little or nothing to do with American comics.

This weakens the overall exhibition but in particular it weakens the arguments in the section Creative Control. European publishing and Asian publishing are a much different game. Issues of creative control there have been minimal by comparison. Similarly the assembly line product of American comic books is largely unknown in continental Europe. The one theme, however, that certainly arises when discussing creative control, especially in American comics, is the issue of ownership. I think Ms. Scherb glosses over this most strangely. The issue is most certainly contemporary–go read an article about Before Watchmen or about any given aspect of Marvel Comics and their consistent screwing of the artists who created the characters you are all busy watching in movie theaters. I attended in April a webcomics panel based on the exhibition and neither the curator nor the artists involved so much as mentioned it. A most curious omission.

The Digital Exhibition section for me is the most problematic. I have to question the wisdom of any curator who selects material based on a Readers’ Choice Survey. I especially question the latent assumption of the theme: that it is important for creators to have a direct link with their readers. This is a bromide of the SEO blogger. I do not share this belief. Page views do not translate to readers and most certainly they do not translate to quality; the Gadarene Swine fallacy applies to comics just as easily as it does anything else. Comments sections are often irrelevant when they are not completely meaningless and regularly do more harm than good; Erika Moen’s experience with her webcomic Dar exemplifies this harm. Furthermore I know many artists who do all of their work in seclusion, without taking any input from admirers or critics and yet still have long, fruitful careers. It is not necessary for any artist to know who her audience is. Often it is worse when an artist does know, because the temptation exists to dumb down the work to meet public perception.

As an exhibition, the experience remains unsatisfactory for me. Again this raises the problem of comics in a foreign, if not hostile, environment. The experience of going to a photography or painting exhibit is not the same as comics. While the amount of time one spends on a painting or photograph would be largely up to each individual, Morning Serial uses scrolling computer screens where the amount of time spent on each screen is completely left up to the curator. Since comics is such a time-based art, where reader control is essential to the process, this is a serious nuisance. True, there are two computers that contain the interactive “hypercomics” Nawlz and The Mr. Nile Experiment. But all comics are interactive to the degree in which the individual reader controls the tempo of reading. Morning Serial does not give this option. While one may argue that a viewer can stay and watch the comics on a continuous loop, that is not at all how comics readers experience a text and it still does not address the essential problem of reader control.

I do not want to say that Morning Serial is a complete failure. It is not. It covers some things fairly well on an introductory level. Ms. Scherb’s taste is certainly not mine. I find her selections fairly middlebrow and far too tied to the generic, but taste is taste and that is not her problem but mine. Certainly I like Spike Trotman and Emily Ivie and I love Dylan Meconis’ Family Man. I like Aaron Diaz, too, but how much more informative and challenging for a viewer to choose Patrick Farley’s work instead, or–if we really must continue the female slant of the exhibit–Emily Carroll’s? Or solve the representation of women and the Anglocentric problem in the exhibit by choosing something like Rene Engstrom’s work? Ultimately the problem with the exhibit is that it is not bad: it is disappointing.

Ms. Scherb notes that Seattle hasn’t had a comic art exhibit since 1998. Partly this is because of the general lack of knowledge and interest in the subject but also because of the lack of a real approach to presentation. I’m not sure this exhibit is any better. The title could just as easily be Beep! Click! Zoom! Webcomics Aren’t Just For Geeks Anymore and it would be just as relevant. It fails to solve all the problems that any exhibit of comics must solve: public perception, rhythmic order, active reader vs. passive spectator and others. In addition it proposes to tackle technical questions stemming from the sea change in the method of delivery of comics by the World Wide Web that it also fails to solve. Partly I think this is because the scope is not sufficiently narrow. The subject at hand far overwhelms the small space that is supposed to contain it. That there is an online component to the exhibit that also fails to address this is symptomatic of the larger problem. Museums are not places for comics. They are also apparently not places for the World Wide Web. Little wonder that the museum is not the place for comics on the web. In time someone may solve this conundrum effectively, but I believe it will be quite some time.