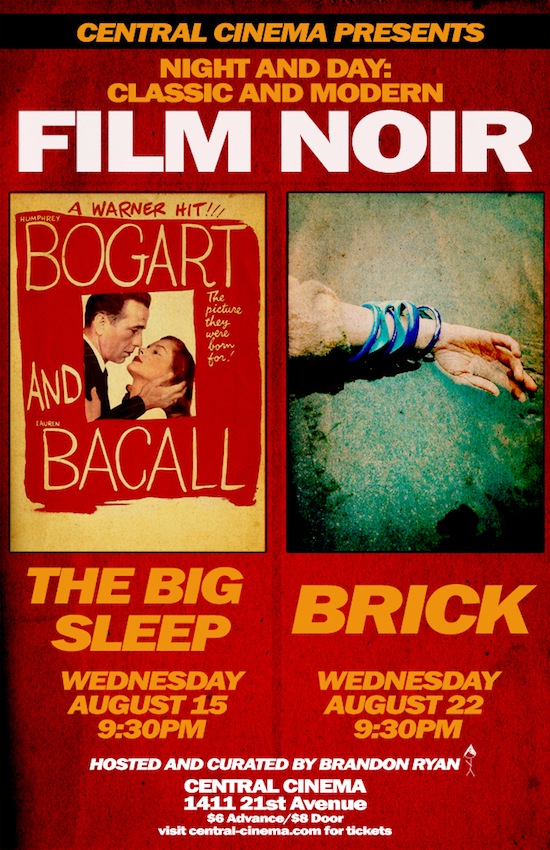 It’s a small wonder that more film noirs aren’t set in Seattle; its natural settings seem to fit hand in glove with the general noir leitmotifs: Overcast skies, rain soaked streets, a dirty part of town with a sketchy history. Thankfully, our denizens have embraced the genre, even if the dream manufacturers ignore us. Seattle is already home to the Seattle Arts Museum’s annual Film Noir Cycle, and the Noir City Film Festival, SIFF’s annual festivals dedicated to showing the classics along with some long forgotten gems of the genre.

These take place but once a year, however; for a more regular diet of these movies, the people at Central Cinema have created the Night and Day Film Noir Series. The purpose of the series is not only to showcase the classic entries in the film noir canon, but to combine them with the newer films (typically labeled ‘neo-noir’), and see how the genre has mutated over the years. The first two entries in the series are Howard Hawks’ 1946 classic, The Big Sleep and Rian Johnson’s 2005 Brick.

The Star sat down with Night and Day’s curator, Brandon Ryan, and discussed what he aims to do with the series, why he feels particularly drawn to Humphrey Bogart, and the unfortunate circumstance that the movie making process ended up driving some of the century’s best writers to self-destructive excesses.

Seattle Star: Why kick off the series with The Big Sleep?

Brandon Ryan: Honestly, I would have preferred to start with The Maltese Falcon, for a few reasons. Humphrey Bogart being the quintessential film noir protagonist. It’s also the first mainstream film noir movie. I know there were a few other debatable ones. Stranger On The Third Floor (1940), for example. But Falcon was huge and epitomizes almost every single element that is in the film noir canon.

Plus, it happens to be one of my favorite films of all time. So I thought it would be awesome to showcase that movie as my introductory film in an autobiographical sense in the series. Alas, Central Cinema got excited about that film and realized that they’d rather get the rights to that and showcase it for a week. My series is supposed to be comprised of one-off screenings. But having that initial film nerd conversation about The Maltese Falcon with Central Cinema owner Kevin Spitzer is what inspired them to offer me some programming dates at the theatre.

Since I couldn’t use Falcon, I went with The Big Sleep. Again, Bogart is my main selling point for the film. He embodies the perfect balance of a weary, beat-down protagonists. He just fits so well into these dark worlds of mystery and intrigue. You believe all of his justified actions. He’s a man who works for $25 a day, plus expenses. He creates his own moral code that he adheres to. He’s tough without a gun and he’s just awesome.

Plus, his chemistry with his future wife Lauren Bacall adds a sense of Hitchcock-ian voyeurism to this film. It feels as though we are intruding upon a relationship that we shouldn’t be watching, because it is so personal and steeped in sexuality. It’s a rare element that just adds an unexpected hint of danger and tension to this film.

The movie itself is not as dark as some of the other upcoming films in my series; it actually has quite a few hilarious moments peppered throughout the film. Which I feel lends it a nice realistic gravitas.

It’s based on the novel by Raymond Chandler, who is the godfather of the hard boiled pulp novels. It’s probably one of the most confusing and engaging of the film noir movies. Its narrative structure and plot even propelled director Howard Hawkes and Bogart to call up Chandler while they were filming to ask him “who killed the chauffeur?” Because they themselves couldn’t figure it out based on the script.

The Big Sleep has a distinct flavor that hints at all of the film noir elements and uses them to great effect. The hapless private investigator, the mysterious femme fatale, the gritty urban setting, convoluted story structures, and incredibly witty hard-boiled dialogue.

I’m particularly drawn to film noirs in which the audience is solving the case along with our protagonists. They don’t know any more than we do. So, it’s more exciting to delve into these worlds with someone like Bogart and try to solve these mysteries with him before the final reel is up.

SStar: The fact that the mystery is somewhat convoluted is kind of a Chandler trademark; or at least it’s a characteristic shared by the hardboiled detective novels of the early 1900s. The lack of objective certainty in the solution to most cases was something that Chandler and Dashiell Hammett used to great effect…

Isn’t The Big Sleep the story that the Coen brothers adapted for The Big Lebowski? “Let’s put Lebowski in the middle of Sleep, and see how he makes out.”

BR: That is exactly correct about The Big Lewbowski, it is basically a loose retelling of Sleep. Most Coen bros films follow a similar film noir stylistic path. A Maguffin, a search for money, a clueless hero. Wonderful stuff.

I’ve tried to pair up each film in the series together for specific reasons. Classic film noir one week and modern neo noir the next; so, in a perfect world, I would have juxtaposed The Big Sleep with The Big Lebowski. But again, Central Cinema wants to play Lewbowski for a week long engagement whenever they get the rights. And rightfully so, it’s a huge crowd pleaser. Alas, once again I couldn’t add it to my series.

SStar: Who wrote the script for Sleep again?

BR: William Faulkner actually co-wrote the screenplay for The Big Sleep, with a Jules Furthman and Leigh Brackett.

SStar: From what I remember Faulkner wasn’t the best fit for the assignment, and his struggles further drove him to drinking.

BR: True. Hawks was something of a renaissance director, and since Faulkner was turning pages in late and being a typical drunken screenwriter, Hawks was moving forward with the script and working on it when he wasn’t getting results from Faulkner. He was quite ingenious that way. He didn’t just sit around and let the barriers get in his way. He was smart and skilled enough to be able to problem solve and just keep going. Kind of reminds me about our fringe theatre mentality. We don’t have the resources as the larger companies, so that forces us to just think outside of the norm and be extra creative with what we’ve got. We basically have to keep moving. Orson Welles was the same.

BR: We’re screening the 1946 release. The 1945 cut was a preview version and was only shown to some soldiers, but the viewing public only ever saw the 1946 version.

BR: I’m not a huge fan of Robert Mitchum. I dig a handful of his films, but not many. So I haven’t delved into that one yet. Jimmy Stewart plays General Sternwood, though, that seems pretty frikkin’ awesome.

That brings up an awesome point. One of my reasons for combining a classic noir with a modern one for this series was to compare films of the past who were hindered by the Hays Code to films of the present that are basically given carte blanche to do what they want while utilizing the same theme. Case in point: Denise Richard’s boobs and “the Bacon” in Wild Things. Or the extreme violence in Nicolas Winding Refn’s recent Drive with Ryan Gosling. But mainly Denise’s boobs.

SStar: Ahh, they were great supporting actors in Things and Starship Troopers. But there’s also all of the sex in Body Heat; the graphic stuff in Shallow Grave…the list is endless, come to think on it…Red Rocks, Last Seduction–and yet, for some reason, the older stuff feels more adult.

BR: Which is why I prefer the older movies to contemporary ones. Just because they can get away with stuff doesn’t mean they always should. I prefer a little ambiguity.

The sexual tension and passion behind something like A Place in the Sun (1951) would most likely be destroyed in a contemporary film with a hot and heavy sex scene. Although Woody Allen’s Matchpoint is a loose remake of that film. But Woody Allen isn’t a great example of how contemporary film makers would bastardize a touchy subject matter.

A lot directors would sacrifice tone and atmosphere for gratuitous violence and sex.

SStar: Allen’s Crimes and Misdemeanors is another great example of a contemporary film with restraint…

SStar: I keep coming back to Chandler’s relationship with Sleep, which was as troubled as Faulkner’s run on the script. He wasn’t pleased to have been kept out of the screenwriting loop. He became more forgiving after his troubles screenwriting on The Blue Dahlia, which he was working on at the same time Sleep was shooting.

It seems that production was plagued with troubles, ranging from the lead actress’ leaden performance (Chandler’s nickname for her: “Ms. Moronica Lake”), to static from the Air Force over his depiction of an ex-bomber pilot driven to murder. Long delays in getting that one finished, and the whole thing drove him further to drink.

BR: Actually, Chandler had to have a doctor on standby to give him glucose injections while writing Dahlia because he had forsaken food completely and was just living on alcohol. Wacky ole writers.

SStar: I still haven’t seen that movie, I’ve only read the screenplay. Cursory searching turns up nothing on Netflix, and only available as a Region 2 DVD on Amazon, along with some VHS copies.

BR: There’s a VHS copy of it at 15th Avenue Video in Capitol Hill.

SStar: Well, that’s a bit of good news, now to dig my old VCR out of storage.

Next week, Ryan and the Star will discuss the second movie in the Night and Day series, Rian Johnson’s 2005 neo-noir retro-experiment Brick.