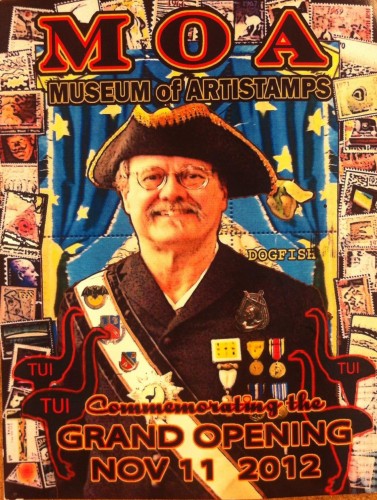 The Tui Tui Ministry of Propaganda in conjunction with the Ministry of Posts and Telecommunications proudly announce the opening of the Museum of Artistamps (MOA), with an exhibition co-curated by James Warren Felter and Dogfish (Robert Rudine).

–from the inaugural exhibition catalogue

As of Sunday 11 November 2012, Seattle boasts one of the U.S.A.’s two museums of artist stamps (artistamps). The other is in Florida. In Budapest, Hungary, Galantái György, a dissident artist, established what may be the first such museum. During the repressive 1970s, Galantái’s use of mail art to communicate with other artists is part of the underground heritage of artistamps.

MOA curator and artistamp creator, Robert Rudine, aka Dogfish of Tui Tui, makes artistamps. His spouse, Janet Yoder (Dragonfly of Tui Tui) says, “He has been doing that since high school, with early editions produced on a ditto machine. After years of making stamps on his own, he discovered that other artists around the world and here in Seattle make artistamps,” and his collection of artistamps grew. The inaugural MOA exhibition includes work by dozens of artists—two cabinets full of stamps, framed pieces, easel folios, and posters which Dogfish/Rudine has amassed over the last four decades.

Twenty four years ago a friend of the Tui Tui couple, Edward Griffiths, built the two cabinets with pull-out frames to house Dogfish’s collection. “For twenty-four years, those frames sat empty. Then this summer, working with accomplished curator/artist Jim Felter, the two of them pulled together the Museum of Artistamps,” Yoder says.

Dogfish/Rudine chose to symbolize and name the new museum for the extinct, flightless moa of New Zealand. An apt, obscure, useful coincidence in the acronym. Dogfish points out, “As with Sasquatch here, Kiwis there in the antipodes dispute the extinction and aver that moas still roam.” Artistamp artists and their products are rare birds too.

Walk into MOA and you walk across a border; enter another land. Lushootseed carvings adorn MOA’s primary structure. (It’s worth a visit just to see these.) The natives communicate in Lushootseed and English. Griffiths’ elegant woodwork appears throughout MOA. His cabinets include the display case frames, knobbed and sliding, that keep the hundreds of stamps protected from light and in a compact space. Stamp art posters and stamp art hang in clever crenulated frames, designed by Rudine and built by Griffiths. The framed pieces look like postage stamps for a giant.

Joel Smith’s work, below, shows some of the virtues of applying images to stamps. The array tells one story; each stamp, its own; and each permutation of the used sheet, another. The messages often run strong and political. With their perforated edges and diminutive size, a stamp appears more playful than serious, and so a heavy content may develop a pithy tension.

Rudine, a.k.a. Dogfish of Tui Tui, has produced an impressive artistamp portfolio which expands steadily yet he tells me he never considered himself an artist. He explains his evolution as deepening joint devotions: to stamps and to very small countries. Several key people spurred these, including a babysitter with a Vatican City stamp collection, an attractive girl with a buried Calvin Coolidge stamp, and a brother with the same knack for invention. The young Rudine brothers invented countries and their currencies, armies, and stamps. A little older and Rudine drew stamps for each song of his garage band. The stamps became diary, newspaper, commemoration, celebration. He mailed them to fellow musicians of The Foetus. And thus was born his network of artists sending their works amongst themselves and their friends through the post.

Artistamp artists like to attach their messages to mail to create mail art, small and mobile. Governmental postal services then participate in disseminating this art, whatever its content. Thus the artists enlarge their community by using a pre-existing infrastructure. Much artistamp content is fanciful. When this content is anti-government, a government may unwittingly participate in delivering messages against itself. Thus the subversive nature of some stamp art.

Rudine has been trading artist stamps with these artists and collecting them for over thirty years. “Often the artist creates a “country” complete with flag, currency, and most importantly stamps,” Yoder says. Some artistamp artists love the trappings associated with the medium: inks, adhesive papers, perforating machines, invented lands, fantastic wardrobes, novel currencies, and arcane and original languages.

Co-curator James Felter hails from Vancouver, BC. He designs mathematical-crossword-puzzle-ish alphabets within the framework of the grid of the artistamp world. He is currently translating Shakespeare sonnets into his Tetris-like language. Using the language will yield surprises even for the artist. He may have developed the language, but that doesn’t mean that he knows how all these permutations will appear before they hit paper. Felter’s work (below) shows how the sheet of stamps operates as a single image and multiple images simultaneously.

The opening was a good party—festive stamp artists dressed in their invented countries’ native garb, fine finger food and cake, cabinets stocked with wonderful and weird art to discuss, the artistamp studio dressed up to host but still showing its workaday machinery, and an eclectic crowd. A video by Kathleen McHugh shows the opening ceremony:

All I wanted were more things to buy. I wanted items to share and send. I did come away with a souvenir packet of stamps from MRAUR, Felter’s invented country; a stamped Tui Tui visa; and a purchased postcard from the Tui Tui post office.

The Artistamp Artists Reunion & Philatelic Exposition (AARPEX) met the day before at University House in Wallingford. Dogfish intends to create portraits of the artists involved in AARPEX/MOA in a commemorative sheet. Below is a portrait of Dogfish from a commemorative of opening day by Centralia’s Test Tower, an AARPEX attendee.

To visit this rare collection, symbolized by and named for the extinct flightless moa, you must engage in what is becoming a more and more rare act. You must write a letter and save mail from extinction. Send your request for an appointment to: