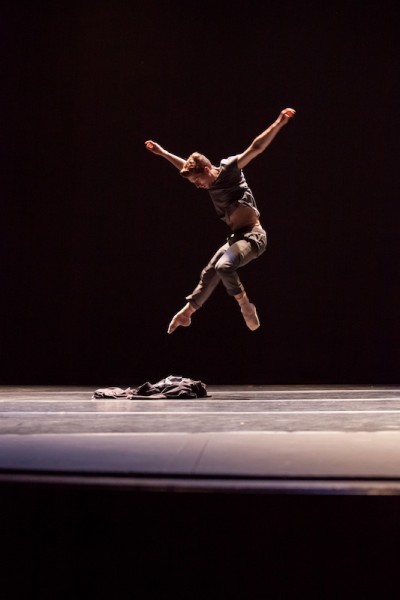 Whim W’him’s Crave More at the Seattle Center Playhouse is a program of four dances with quite different thematic approaches. Two pieces, Crave and Before After, are choreographed by Annabelle Lopez Ochoa while the remaining two, More and The Sofa, are children of the company’s artistic director Olivier Wevers. Both Ms. Ochoa and Mr. Wevers are discovering new things and augmenting their vocabulary. The three most recent pieces (Before After being ten years old now) show newer influences, including some modern dance that would formerly have looked completely out of place in Mr. Wevers’ work, but the foundation here is certainly balletic.

The newest piece, Crave, strikes me as a piece about the rather fruitless quest of six selfish individuals to establish some sort of accord with others–but only on their own terms. The atmosphere is that of a very loud and blinding bright nightclub. The group structure breaks into distinct duets of three duets but the duets are more like non-duets; they simply reinforce the overall isolation and emptiness of both individuals. On one level it is unpleasant in its inevitability–which I am certain is Ms. Ochoa’s point. On another level it is eerily beautiful in its clinical approach. It is especially nice to see Lara Seefeldt in this piece. She obviously feels this piece deeply and her use of subtle pantomime movement is both witty and effective. She could have danced solo and carried most of the piece easily.

Other things in the piece are less effective to me. There is a tone of detachment that sometimes works for me and other times seems to be almost an authorial intrusion, like a narrator in a novel suddenly telling a reader how it simply had to turn out this way, you know, because the younger generation is spiritually lost and stuff. There are also times where, in separate scenes, one of the dancers in a duet simply goes missing. She remains there onstage, but completely without stage presence. The line between cool, ironic detachment and wallflower invisibility sometimes blurs.

Ms. Ochoa’s other piece, Before After, is well-established and rightfully so. Here it is a heartbreaking duet between Lucien Postlewaite and Ms. Ochoa herself. Seeing Ms. Ochoa dance her own piece after all these years clarified some things I had felt the last time I saw it performed; in particular its emotional arc now seems subtler but more rational, yet it is precisely this that gives the dance an exceptional power. Ms. Ochoa is an exquisite dancer who sublimates her movements so deeply in this piece it became a physical demonstration of the old saw that passion intensifies with restraint. In Lucien Postlewaite, she finds a partner who takes on the jagged, broken lines with aplomb, making her clean, deliberate movements even more expressive. He is explosive at times, inversely so to Ms. Ochoa’s demure quality. I have heard that Mr. Postlewaite expressly asked for Ms. Ochoa to accompany him in this piece as the only way he would do it. The choice seems to have been quite correct. I can barely imagine it any other way now.

Both of Mr. Wevers’ pieces left me with the distinct sense that his dance vocabulary has grown at a faster rate than his actual ideas. More comes off as altogether glib in its symbolism. I understood exactly what he wished to say, but I understood it a full four minutes before the piece was done and the rest was pure amelioration. While I love watching Andrew Bartee in almost anything, the use of Ravel’s Bolero here hampers him as a dancer. The rhythm of the choreography builds around emotional states, or at least it should, but the music and its insistent pulse and connotative baggage prevents Mr. Bartee from really being able to build layers of expression into his struggle against materialism. William Blake’s old proverb remains truthful–that desire is unbounded and therefore a source of endless misery–but it needs true heft to make it visible, and More is simply too slight.

The Sofa is a far stronger work. But it, too, leaves me with a sinking feeling. I admire the wit of the piece–wit is always Mr. Wevers’ strong point. The extended series of duets is brilliant, and the whole conceit of the piece is joyful and interesting. Yet I cannot shake the feeling there is something very sterile about it all. I suggest that this is completely on me. The piece reminds me very much of the type of classical ballet that I do not like: it is graceful, ebullient, light-footed, deft–and to my tastebuds a bit like biting into an apple only to find it is hollow and made of wax. It is simply not my kind of work.

The second section in which the sofa no longer brings people together but drives them into themselves adds an effective gravity to the whole proceedings, and the contrasts are nice between the sections, but the ending for me does not work. Yuka Oba and Nick Schultz burst into the piece as though from another stage on which they are performing some Parisian opéra bouffe. They gradually lose their identity and status (represented by their changing costumerie) over the course of the work, finally merging into the full group at the end (in which the sofa hangs over the proceedings like the Sword of Damocles). But the merger seems to me more of an annihilation of self than an acceptance of environment, yet the dance with its rococo lightness works against this.

Still, I like watching Whim W’him as a developing group. On a purely sensuous level, the company always assembles beautiful shows. The dancers are all quite fantastic and Mr. Wevers’ work is growing quickly. I think his vision will provide Seattle with a great many fine dances in the future. But there is still a bit farther to go.