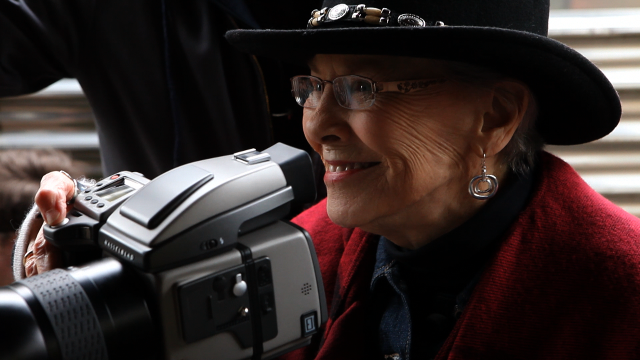 A pioneer, a tastemaker, a woman in a mostly-man’s world, a friend and confidant to the in-crowd, photographer Jini Dellaccio shot everyone from The Sonics to The Who. She’s in her mid-90s now and still wielding a camera. Karen Whitehead, director of the forthcoming documentary on Dellaccio, Her Aim Is True, took a few questions over email. The film plays the Seattle International Film Festival on two dates: Sunday May 26th at 4 pm, and Monday May 27th at 2 pm, both screenings at the Harvard Exit.

Seattle Star: What is your artistic background, and what film projects have you worked on prior to this one? What were and are your impression of Seattle, artistically and otherwise?

Karen Whitehead: My background is in UK television documentary programs and journalism. I have worked for the BBC and other TV networks in the UK. When I moved to the US, I produced a film for the Newseum in Washington DC about the history of the Berlin Wall and the role of the media during the Cold War. I have also been involved in video advocacy projects in the autism community.

Seattle has such a unique vibe and an added bonus for me, very good coffee! I immediately fell in love with the Pacific Northwest. Not just the stunning scenery (which I got to really soak in on our shooting treks from Seattle to Tacoma and along Puget Sound), but I have always been drawn to the distinctive indie and rock music scene here. In an interesting way, it reminds me of my London roots (and I don’t mean just because of the weather!). There is room for creativity and a no fear mentality I think when it comes to the arts community (well that is my impression). There’s a raw energy and fierce independence that is very refreshing.

Seattle Star: How did you first find out about Ms. Dellaccio and her work? What put you on the path to making a documentary about her?

Karen Whitehead: When first I heard about Jini Dellaccio’s photographs (through a friend of a friend) in 2009, I was immediately intrigued. It was quite amazing to discover Jini Dellaccio’s portfolio from album cover photo shoots to live concert photography dating back to the early and mid 1960s. Until I saw Jini’s work, I did not think there were any other women doing rock photography before Annie Leibovitz. I started delving into the mystique of this music subculture and wanted to know so much more about how Jini had become the photographer of the moment in the mid-1960s, shooting garage bands like The Wailers and The Sonics from Tacoma followed by candid live performance shots of bands like The Who, The Rolling Stones and Mamas and Papas.

After meeting Jini Dellaccio and some of the musicians she formed such close relationships with I felt I could take the audience on a fascinating journey through Jini’s life as an artist, with Jini as chief storyteller sharing experiences and memories that really speak to her trailblazing creativity throughout her life.

I think by framing the film’s narrative around an unexpected story behind the “teen dance” scene and indie music-garage bands in the early 60s, we have given audiences a window into a world they never knew – and if they did know the bands, they certainly did not know them from this perspective – through the lens of a great (woman) photographer.

Seattle Star: What were the major challenges of putting the film together, and how did you overcome them?

Karen Whitehead: The constant risk and challenge of this project was that like most indie films, I had to continuously fundraise, appealing to individuals who shared my vision and find creative solutions to lack of finance throughout. And we are not out of the woods yet!

Another specific challenge to this project artistically speaking, was how best to take the audiences back to the time and place where this all began–in the early 1960s–and capture what is an underlying theme of the film: the relationship between music and photography as revealed by Jini’s innovative approach to her subjects. We needed to build a rich visual experience that comprised of more than archival footage and photos!

To do this and create a distinctive profile of Jini’s artistry and the Sixties music scene she found herself immersed in, I knew it was important to somehow recreate those encounters with the musicians she worked with so closely. Remember she was in her middle-age when she first met them all! It made sense to me to reconnect them where it all started–at Dellaccio’s old home and studio in Gig Harbor (which is about an hour or so outside Seattle overlooking the Puget Sound.) Here, we were able to unleash so many memories which helped our interviewing process and I found after we had done this, the direction for the rest of the film in terms of choices we made about our shooting plans and supplemental interviews fell into place.

Seattle Star: Out of all the interview subjects in the film, which were your favorites, and why? Which interviews posed the biggest challenges for you, and how did you respond to those challenges?

It was great to work with all the musicians who had been subjects of Jini Dellacccio’s camera, and it is hard to single any one out, but the constant interview/narrator in this film is Jini Dellaccio and it was an incredibly rewarding experience to work with her throughout this process. Dellaccio is such a tour de force really in terms of her charming storytelling, her wonderful sense of humor and artistry – in addition, you really can’t believe she is in her 90s!

For me, Jini was also a documentarian–very much like the role of the modern filmmaker. At the time she was “observing” her subjects, Jini rarely posed them in studio photo shoot mode, but shot them against the backdrop of nature and clearly, “being themselves.” Whether it was Pete Townshend tossing his guitar in the air or Neil Young sitting by his fireplace in his Laurel Canyon home, and the boys from Tacoma leaning against trees in Jini’s backyard – she captured the essence of who they were and their music. As a filmmaker, I can only hope I have captured the essence of who she is and her legacy as a photographer.

Seattle Star: What are your plans for the film beyond SIFF? Any plans for future projects?

Karen Whitehead: We plan to screen the film at several other film festivals this year and a TV version (one hour) will be available for broadcast. In addition we hope to continue spreading the word about Jini’s legacy and inspiring story as an artist offering the film for community screenings and arts educational outreach programs.