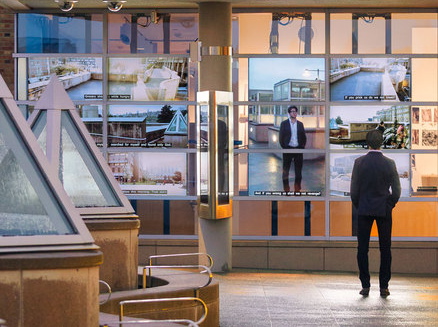 “Not many people think about the data processing that goes on behind the scenes when they use social media,” says Juan Pampin, Associate Professor of Music Composition at the University of Washington. “Messages are collected on Facebook and surveillance cameras collect demographic profiles. So, we are using these technologies to create a node or a place where they can coexist, and you are the center of it.”

Massive amounts of information are being collected about us everyday. Whether Facebook and Google clicks, Twitter feeds or purchases at the grocery store and GPS coordinates, our personal information (a.k.a “big data”) is considered to be the new gold. Companies and governments have a vested interest in tracking our behavior. Just think shopping habits and employee productivity or protests, security and elections.

A new exhibition at the Henry Art Gallery by James Coupe and Juan Pampin sets the stage for a closer look at how data collection might change our experiences in public space in the very near future. Sanctum opened on May 4 and is located on the outside façade of the Henry Art Gallery at the University of Washington. Six surveillance cameras have been installed and can use facial recognition to pull your face out of the crowd of passers by. And the next step…are you ready to be profiled? If not, you can still opt out as the large sign warns, “You are entering a public space that is being video recorded… By traveling within twelve feet of the façade of the Henry Art Gallery, you will have consented to be part of this project.”

Opting IN: The New Algorithm-Based You

Should you decide to opt-in, your image will be picked out of the crowd and broadcast onto eighteen 42-inch LCD monitors mounted in the windows of the museum’s entrance. Meanwhile, two of the surveillance cameras have been busy. These are not just regular cameras. Using soft biometrics they have been busy sending your information to Sanctum‘s system.

Then the fun begins. Within seconds, information on your age, gender, race, location and facial expression is compared with social media to generate a match to your profile. Facebook updates and tweets identified as belonging to a person with a similar profile begin to come up on screen. A murmur of voices is beamed at you using ultrasound technology as you walk by. The project uses text-to-speech software, and you begin to recognize the audio follows to the narrative of text and tweets displayed on screen. What narrative is attributed to your profile? Can the algorithm-based system behind Sanctum produce a story that truly matches how you see yourself? Perhaps yes, perhaps no, but what is certain is that this work provides a chilling glimpse into the extent of profiling that is already happening all around us.

Sanctum offers an exciting glimpse into the guaranteed to be fraught with errors and gaps process of profiling. Take for example a recent study of Twitter data that found that, “People who move around more are likely to be happier than those who stay close to home.” The impact of this statement is lost when you discover that this information represents only the 16% of adults in the United States who use Twitter. Of that, don’t forget to factor in the twenty million or so fake Twitter “bot” accounts. This is just the start of the challenges facing the expanding field of data mining but, like it or not, it is already in use all around us.

The “profile” information you see displayed, including Facebook updates are given voluntarily, and anyone is invited to contribute by signing up. Given the voluntary nature of the information they face a similar challenge. But is this any different than the data collected by big data used to determine which ads to place next to your Facebook wall?

Have you ever had the experience of chatting with a friend online about the problems they’re having trying to quit smoking, when almost immediately, an ad for prescription Chantix appears alongside your news feed. But you’re not the one with the smoking habit! Maybe you follow the link anyways out of curiosity and discover information you never knew. For instance that many smokers will quit as many as nine times in their lives. Not only that, but the ad inspires you to surf the web where you learn about the freedom from smoking plan. You Facebook message your friend with the link and you feel like the best friend in the world. Or maybe you just ignore the ad thinking that it doesn’t have anything to do with you. Either way you’ll probably be receiving ads for quitting smoking from Facebook for the next ten years of your life.

Is there really anyway to opt out anymore? According to the artists some passers-by become uncomfortable when faced with the publicity of online platforms in the physical public realm. Some even came into the gallery to complain. While we upload our status update, our location and photos to the internet, seeing these displayed in public spaces such as on the side of an art gallery might be unnerving. Yes, you can elect not to open a Facebook account or email, “But in reality,” reminds Pampin, “if you don’t want to be videotaped, you probably can’t go out of your house.”