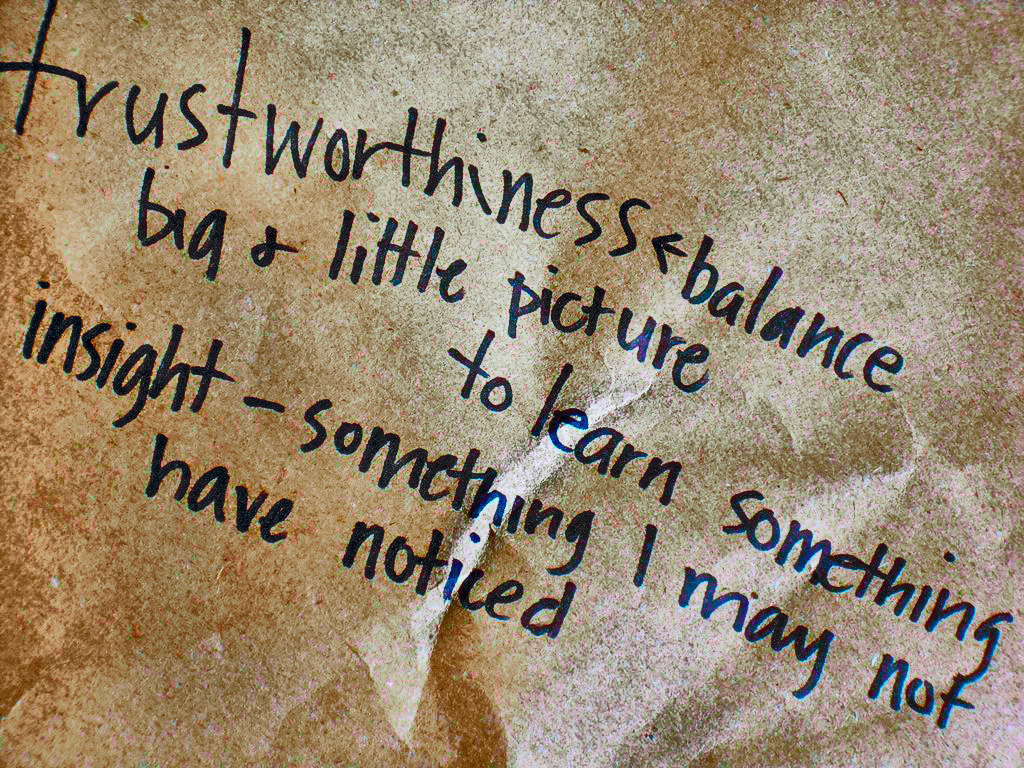 Working with students humbles my spirit. Each time I teach, I learn. Every time a student encounters a new thought that she feels safely powerful to explore, that encounter is a revelation not only to the student but to me. In this way, each student clarifies my own thinking. Such encounters give me license to explore things once more, with new eyes and new purpose.

Over the past two months I have been teaching workshops on writing about the arts. The primary purpose behind the workshops continues to be teaching people to consider their artistic experiences as opportunities to think about arts not as things or events but as parts of a larger process. Learning this is as difficult as teaching it. One will hardly receive validation for such explorations from watching television or reading a Twitter feed. American society has largely forced art into a framework where it exists only as a tradable commodity–exactly what is at issue in absurd statements like “the culture business.” I am trying in my own humble way to reverse this. I operate under the belief that art rarely has an easily quantifiable value, least of all in monetary terms, and that asking it to defend its existence in such terms is a mission for fools, designed by fools.

The latent purpose behind these workshops, however, is to learn what the students know: what they think and how they think about art. Each class is an opportunity to go beyond theoretical arguments about poetics and aesthetics that litter the artistic landscape. Frankly I do not care about such matters and neither do most people outside of academia. Instead, each class teaches me plainly what assumptions my students share about what exactly art means to them, and exactly what they think about it. Some of their thoughts are brilliant. Many are insightful. A few are toxic.

What I have seen consistently leads me to some conclusions about how Seattleites think about the arts.

Consistently, I note from class to class that students spend very little time talking about the materials or the facture of art. It is obvious to artists that there is a difference between, say, watercolor and oil, or pen & ink, but students writing about visual art ignore the issue almost completely. Having read their writing about theater, I have not yet seen a student mention even something as basic as blocking.

What students do in almost every single case is, when confronted with a work of art for the first time, lapse immediately into value judgment and interpretation: whether or not they like it, what they think the artist’s “intention” was, et cetera. I am not surprised by this, and neither are they. What does surprise them is my suggestion that there is no way to hold such value judgments and interpretations. How can they leap to such conclusions, after all, without even the most basic description of the work, how it looks or how it is made? In treating art as a springboard for value judgments that need to be “defended” (despite the impossibility of such a thing), students implicitly accept a notion that art is a slopbucket, an empty vessel to fill with their prejudices and cultural detritus. And why not? This is exactly what the ostensibly professional critics around them practice. Seattle’s critics are rarely critical. Finding accurate description and analysis of formal qualities in the writing of Seattle’s critics is a bit like searching for a needle in a haystack, and most of our writers are far from that sharp.

Near the beginning of each class, I have students write down on the table what they want from practicing critics. The results have been amazingly consistent. All but one of my students so far has written down “information” or “background” or “history.” This seems easy enough. It is a basic demand for knowledge. Every reader expects to learn something whenever she reads and, to some degree, even the weakest critics in Seattle provide such.

What most critics lack in this area is the ability to connect history to context, the “big picture” that my student writes in the picture above. While it may be informative to tell an audience that a play was first produced in 1896, for instance, the raw fact is not at all what the reader cares about. He cares about the difference between 1896 and 2013, not merely in chronological terms but in social and intellectual ones. Sadly, many critics have no such interest in intellect or society. They simply provide the reader with some background, which often comes across as simple padding (read the Times any given week for an easy example), and go back into the much-abused mode of evaluation.

Without exception, every one of my students so far has written that what they want from a critic is “insight” or illumination of something they would not otherwise have seen in the piece. To them, this is even more important than historical context. Not a single student has ever asked for a critic to have impeccable taste, or to be persuasive. Like my students, most critics accept that criticism is all about defending your taste. The obvious retort is that taste is opinion, and there is no way to defend an opinion because opinions cannot be argued.

Why then do critics spend so much time in evaluation? I think the answer has at least two parts.

People spend so much time in school, learning to please, learning to parrot, learning to pick the “right” viewpoint. They argue, fight, claw, die for it. The idea that they should actually explore an idea exhaustively, that they should be free to question anything and everything, and that the entire purpose of thinking is not to be right but rather to be able to go in a direction of their own choosing is alien to them.

This is what comes up when people tell me things like “Criticism should shake you up. Make you tear your hair, pull the buttons off your shirt and bare your chest. Bellow at the world! Otherwise you’re putting cheese whiz on saltines and wasting precious calories.” I disagree. Not all criticism need be brutal. Not all criticism be argumentative in the manner of high school debate class, or belong to what my colleague A.D. Coleman likes to call “the destruction business.” Not every argument is analytical. To describe thoroughly what one clearly sees is also a way of making an argument. The clarity of description and accumulation of details themselves form a perspective and state a case. Indeed this is the very method of poetry, and no one will ever accuse Carolyn Forché or William Carlos Williams or Czesław Miłosz of not making arguments.

As Morris Weitz once wrote about Shakespeare, “To give an interpretation, reading, the meaning of the part or all of Hamlet, or to state what is most important in Hamlet or in the understanding of Hamlet, is to give an explanation of it.” That explanation is criticism. Its function falls neatly into W.H. Auden’s classification of six things a critic can do for a reader. Yet one can read that entire book from which the Weitz quotation comes without ever once feeling like it is destructive. More to the point, one can read that entire book and never once read whether or not the writer “likes” Hamlet or thinks it is worth the ticket price.

The other reason, I think, is not simply intellectual laziness, though there is much of that, too but rather a complete misunderstanding of the function of criticism. It is the notion that criticism ought to function as a consumer guide. After all, people only have so much time, and there is so much material that people expect critics to tell them what is worth their time and money. The latent belief, I think, is that the value of art is quantifiable, from which follows that value and monetary worth transfer in a one-to-one correspondence.

This is easily ludicrous, yet the belief persists because of the stranglehold of capitalist thinking on American audiences. The Hollywood film industry is perhaps the most egregious example, where the amount of money spent on a picture is used as propaganda to draw in audiences. People who would laugh at the idea of attending a dance or play because of its budget or length of production time nevertheless do attend films on just this premise and are intimately familiar with the numbers that get thrown around concerning budget and schedule. From there is only a sidestep to the idea that if a film company spends $200M on a picture it had “better be worth it.”

Worth is not value. When critics indulge this fantasy about serving as consumer watchdogs for the working class, they ignore their basic raison d’être: not to serve the marketplace, but to serve the body politic. The social demand for exploration of human existence is immense, eternal, and not easily reduced to whether or not it is worth $50 for a book, or $30 for a play, or $15 for a day at the museum. By turning themselves into tastemongering shills who pimp the idea that art, too, is bound by a dollar value, critics not only do the arts a disservice; they also make themselves irrelevant.

It is very difficult to argue that art is important to people’s lives when art exists in the same framework as a restaurant–the culinary theater par excellence. I do not hold out any hope that the critics currently writing their pabulum for the newspaper masses will change, because they have no reason to, beyond their own relevance to society, and clearly none of them care about that. In teaching the diverse groups of people I have taught over the past couple months, however, I am more optimistic. There is a long way to go in clearing the rubble that stands between the layman and art. I am convinced that artists and audiences stand both to benefit from better discussion about the arts: not based on consumerism, not built on bogus hierarchies, not conforming to unexamined prejudices, but real discussion, among real people, with a real basis–away from the Zagat guide model of criticism that plagues our newspapers, away from the unintelligent tastemongering that infests the internets.