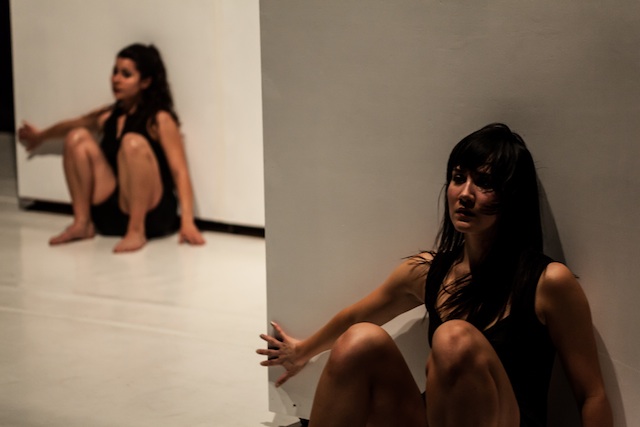 When the BOOST dance festival premiered in 2010, it was a welcome challenge. At the time, I counted, there were sixty-one different producing dance groups. Yet all of these dancers were, essentially, competing for an extremely limited number of spaces with an even more limited number of actual opportunities to stage their work before a public. The situation then was unhealthy and remains far from ideal, but Marlo Martin’s vision has guided BOOST to its place as one of the most interesting festivals in the city.

Three separate shows from the last BOOST festival–one from Kristen Legg, one from Maya Soto, one from Ms. Martin herself–have gone on to full length productions that likely would not have happened without the festival having given the choreographers a chance to test the waters with excerpts from the longer pieces.

The Split Bill show at Broadway Performance Hall back in April featured two pieces, one from Ms. Legg and one from Ms. Martin. Ms. Martin’s piece without context or provocation turned away from the emotional relationships that structured her tenSIDES last year, toward a sort of thoughtful introspection. On its debut at the festival, I wondered what the full dance would look like. In the festival excerpt, the piece opened with two overlapping confessional voice tracks, something between a diary and an interview with the dancers talking about their biographies and creative processes. The full version was more elaborate still.

It opens with ominous, low-pitched electronic music that hums quite slowly and without immediate rhythm. The dancers work almost improvisationally, exploring the immediate space below and around them. Their intensity starts high and gets higher as the music swells and begins to take on a mechanical rhythm. Then the dancers drift into unison and begin a cycle of trios within the septet that build from low earthbound movements to a feverish variety of rear leg kicks, backward chassés and other sorts of controlled chaos within the larger ensemble. Further sections develop from this in different directions. The density of the dance is exceptional, but Ms. Martin has also increased the density of the event with layers of sound and video projections against a pair of breakaway white walls, to recreate completely new environments from the essentially dark and bare stage. The elemental water environment, for instance, against which the dancers play out a section that begins with a heightened pantomime of drowning is subtle and sensuous, quite unlike the more obvious, argumentative uses of video in some recent dances.

Ms. Martin’s work is always energetic and this is no exception. I marvel at the forcefulness and beauty of her dancers, Karen Baskett, Jennifer Elder, Nadia Losonsky, Anne Motl, Alex Goldstein, Michelle O’Neill and Danica Bito. They throw themselves into the work quite passionately yet also understand the lyrical quality within it. The work argues viscerally, but this is a deeply emotional piece with a gentleness to it beneath the physically aggressive approach. In that sense, it is what I have come to expect from Ms. Martin’s work.

Kristen Legg’s piece, An Irritating Cerebral Itch, might seem similar on the surface. It continued her exploration of her concerns with feminine gender roles and liberation, and shared that in common with Ms. Martin’s work. Where Ms. Martin’s work is explicit and extroverted, Ms. Legg’s work here preferred understatement. This piece used a much more rarefied dance vocabulary than her other works, which have tended toward a kind of rococo feeling. Not here: the movement here was linear, clean; nothing was wasted. The variations grew from a fairly strict vocabulary.

This was what made it simple, clear and forceful. Ms. Legg clearly has a good relationship with her dancers. Ms. Legg has always designed her dances so that they can seemingly be danced by anyone. She has made a virtue of this apparent effortlessness. Yet her dancers are highly disciplined, though they make it all look quite easy.

Unlike many other dance groups, here no particular ideal body type was on display. Ms. Legg’s belief is, I think, that limiting dance to a particular type of woman with a particular ectomorphic shape limits the options for dance itself. By representing more women of different “types” a choreographer actually expands her vocabulary. The range of femininity she chooses to incorporate in her work is purposely broad as part of an ethos, and this ethos defines Ms. Legg’s style.

Though Carla María Negrete Martínez, Karen Baskett, Mary Kirkpatrick and Karena Birk are certainly capable virtuosos, their virtuosity was deliberately limited within Ms. Legg’s piece and this constraint allowed for an ease, a more direct communication. The duets and solos became thereby even more emotionally powerful under restraint, the way that a singer understating a love song makes the tune even stronger.

The ensemble dancing in An Irritating Cerebral Itch tends to be quite symmetrical, but there are subtle variations in the symmetry. This is doubtless why people think of her work as “neoclassical” but I resist such a designation. Neoclassicism is about emotional detachment rather than emotional restraint, and Ms. Legg’s works are deeply emotional. This is certainly my favorite piece of hers so far. I think it combines all her strengths and purges most of her former weaknesses.

Where Ms. Legg’s piece concentrated on the princess archetype, Maya Soto’s Gathering Bones at Velocity Dance Center explored the evolution of the princess into the warrior and queen. Two pieces of dance could hardly be more different. Ms. Legg’s work was gentle, lyrical and restrained. Ms. Soto’s work was brazen, rhapsodic, belligerent. Both were works about liberation but rather than liberation through acceptance, as in Ms. Legg’s work, Ms. Soto’s piece was about liberation through violence.

Entering in a slow processional with formal gowns, the dancers stood on the stage as princess characters to open the show, all of them in black but for a single one in white. This formal ballroom atmosphere however lasted only briefly, as each in turn was stripped quite brusquely of their princess costumes and forced to find the she-wolf within. In so doing they became warriors and began to battle viscerally in a protracted battle sequence around which the rest of the dance pivots. Much of the movement is pantomimic, with a certain degree of stylization, but no less brutal for this. The low-key lighting by ilvs struass and Paurl Walsh’s excellent music heighten the effect.

After this great carnage played out on stage, the spirit of La Huesera, I assume, entered to “gather the bones” of the women and prepare them for their resurrection. One by one, each returned to life. Having been transfigured through the ritual, the princesses recovered their former movements from early in the evening, this time subtler and with different purpose. This was the product of war and strife: each became queens, complete with crowns, as they faced the audience and the lights went down.

The entire evening is a sort of blood ritual but beneath the obvious the dance asked questions about what it means to be feminine. 21st Century America is, of course, filled with clichés about “strong women” and what that might mean. Generally, in popular media, it has meant women who take on many of the worst characteristics of men–what Lindsay Wagner referred to in Wonder Women: The Untold Story of American Superheroines as “a man running around in a skirt.” Ms. Soto’s take was, I think, much more refined.

If I read the dance correctly, her belief is that all three archetypes–princess, warrior, queen–exist within every woman but they are rarely in balance. It is not supremely feminine simply to be a warrior and kill just as mindlessly as men. The ritual of violence on the surface is no different from any masculine ritual of violence in America (think of the films of Sam Peckinpah, for instance). What then does make it feminine, if not wisdom? The larger question remains, then, not only how does a woman control her internal violence but also what exactly does she value enough to fight for? Given the visual gallery display accompanying the show, there can be no single answer to this. I hardly think a single dance could provide such an answer, anyway. While the evening is self-contained, it may well be only the beginning of a larger exploration of the theme for Ms. Soto and her company over the years.

Gathering Bones is a brutally exciting show. It is vigorously physical, with generally simple movement, and it is possible simply to enjoy it as a visceral spectacle of women “kicking butt.” I am certain many enjoyed it exactly that way, like an episode of Buffy the Vampire Slayer. There is, however, a deeper intellect at play here. Ms. Soto’s use of myth to reflect the dilemmas of the contemporary female is truthful and timely. Her dancers are brilliant and her ideas are fresh.

These are three bright dances that, if not for BOOST, would have had a much more difficult route to get on the stage. Three shows, I think, of which any single one is proof enough that the less centralization and the more variety we have in the Seattle dance, the better for us all.