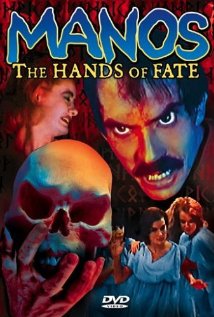 “Worst” and “greatest” order chosen, for the paragraph above, arbitrarily by the toss of a coin.  Manos:  The Hands Of Fate, released originally in 1966, sits comfortably and expansively at the center of the cinematic universe, much as the “boundless daemon sultan Azathoth” sits at the center of H.P. Lovecraft’s universe.  Manos is visible from all vectors, all vantage points, and affects all.

For those of you who don’t know Manos, it is “about” a little family–mother, father and little girl–who get lost on a drive.  Like Don Henley, they have to stop for the night.  They find an almost-deserted lodge inhabited only by Torgo.  Torgo is short, squat, clothed out of the Goodwill bin, and takes about 87 years to move from one side of an average-sized room to the other.

Torgo takes care of the place “while the Master is away.”  The Master appears in a painting in the house.  The Master is “not dead as you know it,” opines Torgo.  This will have ramifications.

But soft, let me invoke the late Roger Ebert here:  ““It’s not what a movie is about, it’s how it is about it.”  Manos in this sense of “about”ness, then, is about a different kind of trip, one to an alternate universe.  A universe containing many aspects of our own universe, but significantly different.  A universe of sloth, inertia, stochastic ooze, where we have to examine simple actions—such as moving from one side of an average-sized room to the other—in every aspect, simply because of this slowness.  A universe that compels us into a trance state, especially in the night-for-night shots which climax the film, where insects flying towards the camera wait to jerk us out of the trance, by reminding us that a few things in this universe move, after all, at “our” speeds.

This universe also contains rough magic and an all-present, never-seen deity called “Manos,” which can be invoked and beseeched, but will never materialize.  “Manos” finds its manifestation in the enormous hands on the robes of the Master—the Master who eventually Manifests, having returned from one step closer to Manos than allowed any other.

Manos lay almost completely forgotten for many years after its release, until the japers at Mystery Science Theater 3000 picked it up for one of their conceptual turkey shoots.  Of course, Manos and “Manos” were not mocked; they inflicted more pain on MST3K host Joel and his sidekick robots than almost any film before.  Of course, the show insisted on mediating the experience.  I find Manos most powerful, and most righteous, taken straight (although others will not agree, as shown below).

A restored non-roboted version of Manos plays the SIFF Cinema Uptown this coming Wednesday, August 7th, at 9 pm.  Jackey Jones, who played “little Debbie,” the young daughter in the film, will appear and give behind-the-scenes testimony.  You’ll also get an advance glimpse of the bold Manos puppet-show adaptation entitled, yes indeed, Manos:  The Hands Of Felt, running August 9-17 at Richard Hugo House.

I interviewed three major players in the Manos pantheon.  First, here is the testimony of Jackey Raye Neyman Jones, who played “little Debbie” in the film, and is also the daughter of Tom “The Master” Neyman.  In her own words:

I was born in Fort Worth but raised in El Paso.  My dad was Executive Director of the South El Paso Boys Club serving a deeply impoverished community directly on the banks of the Rio Grande River and across from Juarez, Mexico.  My dad was involved in theater at the Festival which is now The El Paso Playhouse and looks almost exactly the same.

After a few years of acting and directing, he became Executive Director of the Theater and that’s about the time Hal Warren approached him to do Manos.  My mother was a schoolteacher and was working on Fort Bliss at the school in 1966 and 1967.  I also went to school there for 1st and 2nd grade although we were not military.

My family was educated, artistic and community minded and chose to buy a house in a poor but tight knit Hispanic neighborhood.  We were really different and I was pretty much an oddity growing up.

Hal Warren was an occasional actor at the Festival and when he decided to do his film, he asked my dad to help.  My dad jumped right in and since he had been asked to also be creative director, my dad took advantage of much of the art he already had done.  He was in a phase of creating hands, so he suggested the title change from Fingers of Fate to Manos: The Hands of Fate.  My dad tells me this was also a joke since no one else in that production meeting spoke Spanish and didn’t realize the redundancy of the title.  [“Manos” is Spanish for “hands.”]

My dad came home and told me they needed a little girl for the movie and would I like to be her.  I jumped at the chance to spend more time with him so I said yes.  He also provided the car, the Doberman, the seamstress that made the costumes (my mother), all the artwork, Torgo’s knees, and much of the furniture and accessories in the house.  Not the horribly stained couch however.  That was already there.

I was accustomed to seeing my dad in character.  He played everything from Willie Loman to King Arthur.  I learned to read by running lines for him and had to be on my game to help him keep the timing.  I attended every performance Iwas allowed and would have lived at the theater.

I remember clearly hearing on the radio that John Reynolds [“Torgo”] had committed suicide.  We were driving to school and my mom had to pull over.  My family was devastated.  John and my dad were good friends.

No one told me the film had been shot silent and someone would be dubbing my voice…A middle age someone.  I was absolutely shocked and horrified.  I’ve gotten over it. Lol.

Manos had been a story for my friends and a set of cherished memories until it showed up on MST3K.  I had looked for it for years.  My dad just happened to see it while watching MST3K and called me in 1993.

I’ve just been keeping up with it since then but in the last two years or so things have really jumped.

I’ve established myself as one of the only living cast or crew and the only one willing to talk about it.  Diane Mahree [who played the wife in the film] may have some interest in becoming more public and I will keep people up dated about that…

As for myself, I love everything Manos.  The fans are such great people and I enjoy every opportunity to connect with them.  I’m along for the ride.

The healing aspect [of the film’s rediscovery] could be a whole book, as family things often are.  My dad and I have been unable to have a relationship for years and Manos has opened doors to allow some of that connection back in our lives.  I feel it has created healing for more than just us.

There is much Manos Mythology and I’ve picked away at it for years.  One of the most ridiculous ones is that John Reynolds wore his leg braces backwards and they caused such horrid pain he became addicted to painkillers that then led to his suicide.

Brian Koch created a hilarious version of Manos in Portland on stage.  He found me through my blog and asked if I would like to participate in any way.

The part of Debbie was played by a puppet on stage and I did the voice on microphone from the light booth.  Poetic justice.  Debbie is still dubbed by a middle-age woman but this time the woman IS Debbie.  It was one of the greatest experiences of my life.  I got to work with and hang out in Portland with the most awesome and talented group of people.

I have seen the Manos Restoration twice in a theater, the unfinished version in El Paso at the El Paso Film Festival and again in Los Angeles at the Hollywood Theater.  I was honored both times to be a special guest and do a Q and A afterwards with fans. It’s great fun watching it in a theater with an appreciative audience and then meeting them face to face.

I am a professional artist living in Western Oregon.  I ran a Faux Finish business for over 20 years and now I do painting jobs, and other odd jobs to make ends meet while I pursue my art career and my Manos interests.  I do art exhibits, artist receptions, and display my work wherever they will have me.  Restaurants, wineries, coffee houses and the like.  I’m merchandising my art and Manos stuff on my Etsy storefront at  http://www.etsy.com/shop/jackeyraye .

I’m open to any art or Manos opportunity that comes my way.

[In Part Deux, Andrew Hamlin continues with more interviews in the Manos universe: the filmmaker behind the restoration of Manos in HD, and the Seattle puppeteer responsible for the upcoming Manos puppet show spinoff.–Ed.]