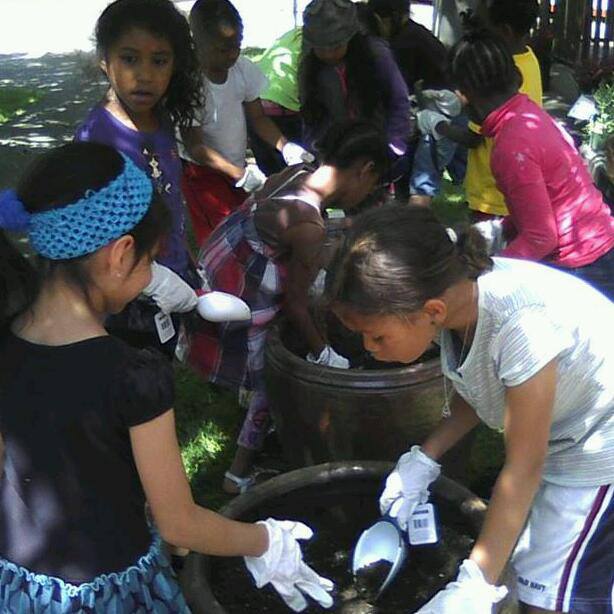 During my visit to First Place School I am distracted. Dawn Mason, a former WA State Representative, leads me through the halls on an informal tour. Her flowing skirt brushes against the walls as she walks. This place is another kind of home to her.

I am here to find myself some sense of purpose so that I can stay grounded while my father battles his tenth year of cancer back in California. I’m not sure what I’ll find.

The brick building has an intimacy. Everything is within arm’s reach. The classrooms, the cafeteria, the front desk, the offices are all close at hand. The school itself embodies the chaos that defines most schools on the cusp of their ritual new beginning. In that way alone, First Place is like every other school.

I wonder, in the midst of my own personal chaos, what the students are doing during their summer? This is an elementary school for children who are, or are at risk of becoming homeless. The school has managed to stay open and under the radar for twenty-five years. running entirely off of private donations. After nearly shutting down ten years ago, with Dawn’s guidance it has flourished.

Why am I here? Because I’m trying to un-lose myself.

I think, Maybe I want to be a teacher. We sit across from each other in one of the counseling rooms. Dawn tells me about the different kinds of trauma the children cope with, shows me the anatomically correct dolls. I can’t seem to focus. Again, I wonder what the students are doing in the middle of July without school to hold them steady. Maybe I should become a school counselor instead. Somewhat randomly I ask, “But where do the students sleep? Where do they go after school?”

“Well…” And Dawn opens her hands in front of me as if in offering: “The school bus takes ’em back. Some of ’em live in transitional housing with their folks and some in the shelters. A lot just move around from house to house, you know, with different relatives, while their parents get their act together…” and she clasps her hands together again.

I wait for her to continue and she easily picks up from where she left off. Her words cascade over me and for a moment I let myself get lost in her comforting Mama Bear presence. Over Dawn’s shoulder I notice a large pane of reflective glass that almost looks silver in the room.

“It’s an observation window,” Dawn says, pointing her finger at the inset frame.

I study the details of the room through its reflection and find myself seated among plastic miniature chairs, dolls, blocks, stuffed toys and coloring books. We leave the playroom behind. Dawn leads me to the office of the head teacher, Miriam Reed, and disappears. For a brief second I feel abandoned.

Miriam is direct but warm. I can tell she is thinking of a dozen things when she very immediately, very succinctly, starts a conversation with me about preparing the students for entry into Seattle’s top schools: Lakeside, Seattle Prep, SAAS… She describes her proposed plan to implement a core multicultural curriculum, one in which the students learn the philosophies, arts, technologies, spiritualism and histories of non-western cultures beyond the context of European imperialism. A history of Africa before the Middle Passage. Religious studies of Native American animism before the missions. Latin American indigenous cultures before they were Latin.

As she speaks, things steadily start to come into focus. I start asking questions and Miriam begins pulling books off of shelves and hands them to me. Some are about Native American spirit animals, others have creation myths from different indigenous groups of the Americas.

“Start with this,” she tells me, “and make a lesson plan.”

I hungrily accept the challenge and walk to catch the 48 bus loaded down with books. For the next six weeks, I only see Dawn in passing while I come up with new and creative projects focused on Native American and African history.

All during this time, I am reminded of my own experience. Being handpicked by Mrs. Turner, a language arts teacher at my junior high school, to shadow at Menlo School, I like to think that it was the way I wrote essays and played the violin that drew her to me. Maybe. Really though, I was a kid that was lucky enough to test well under stress. At the beginning of the eighth grade I did particularly well on the STAR, California’s standardized test for elementary and junior high students. Mrs. Turner noticed. She interrupted one of my classes to talk to me, to gauge my interest in going to a prestigious high school in Atherton, CA.

At 13 I didn’t know there were public and private schools let alone that there was a difference between the two. I had never heard of Atherton or Menlo even though I had probably passed through and by it several times during my childhood. As an adult I remember that to my adolescent senses Menlo was collegiate, statuesque and exclusive. Teachers had resources and time. The students were brilliant not only in intellect but in appearance. I remember that the girls bathrooms had marble countertops and the walls were free of graffiti. Everything seemed to shine. Facilities staff drove around in electrically-powered golf carts, with students calmly mingling.

All at once I grasped the profound difference between public and private school education: experience. And something else: improved chances, for everything. Going to Menlo quickly went from being an intriguing option to an absolute necessity. But I had to get accepted first. I had to interview and take a placement test. I had to prove myself in an applicant pool full of kids who’d been going to private school since kindergarten. But I succeeded and the next fall, after a long application process and fully funded by a whopping $24,000 scholarship, I became part of Menlo’s class of 2005.

During our meetings at First Place, Miriam keeps telling me how smart the kids are. That they are capable and bright and inquisitive. She tells me about one student meeting President Obama the year before. She tells me they can make it to Lakeside.

I can’t stop thinking about Menlo. There were three others from my junior high that were accepted at Menlo. We were all scholarship kids and, with the exception of one, we were all some shade of brown. After our first year acculturating to Menlo’s culture of competitive over-achievement, none of us performed well enough in math or physics to continue into our sophomore year without summer school.

I had been built up by my teachers to believe that I was bright and I never doubted it until Menlo. My desire to resonate with my new classmates was quashed by the stigma of remedial education. I became silent in most of my classes where I was often the only black student. There I was: the black representative for the freshman class of Menlo School. But something in me held on to that truth, that betrayal, through summer school and my remaining years there, I held onto the possibility that I deserved to be where I was, even when some of my peers told me my only purpose was to fulfill a quota.

There is a school in the US that has successfully implemented an Afrocentric curriculum for their predominantly black students. In 2010, Marcus Garvey Academy in Detroit, MI outperformed the other schools in its district and in the state of Michigan on the MEAP (Michigan Educational Assessment Program). Their curriculum focuses on African and African American history based on principles of Kwanzaa and an Egyptian values system. In Canada, the Africentric Alternative School in Toronto surpassed other schools in the area and in the entire province of Ontario in reading, writing, and math. Yet school districts, parents, and politics continue to scrutinize and cancel classes that give students a more culturally well-rounded education that shows them how to look beyond the reaches of slavery and imperialism. Just this year in Seattle, Center High School was forced to suspend its 10 year long-running race and social justice section of humanities after one parent complained.

Imagine learning that your race was enslaved for hundreds of years before a controversial war that killed more people than all of the American wars in the 20th century combined freed them, only to be beaten down for a hundred more years by Jim Crow, terrorism and chronic discrimination. You learn about the Harlem Renaissance and celebrate the Civil Rights Movement during Black History Month, but for the most part you learn about a history fraught with struggle. It begins with slavery. It begins with pain.

So you go to college and attend classes about multicultural awareness and the legacy of slavery. You learn about white privilege and attend your university’s Race and Pedagogy conference. You talk the politics of affirmative action to death, but it doesn’t seem to fill the emptiness that you’re becoming more and more aware of. Even though you’ve risen above the world’s expectations of who you would become, you still don’t know how to address that void. You get used to the world telling you who you are. You read statistics that say African American women are still one of the lowest performing demographic groups in education and receive less pay in the work place than any other group with the exception of undocumented immigrants. You learn to push yourself harder than anyone else because you must outperform your white counterparts to be recognized as equal. And when you do outperform, when you tell people where you got your education, when you dazzle them with your articulate speech, you’ll still be asked to explain to the world your merits for the privilege of earning a private school education. And one day, as you explain your merits with confidence, you’ll realize you aren’t that confident in your merits at all because you decided to check the box specifying your identity on the Common Application: “Female, Black, Native American, Other…”

Confronting the disparities created by continued systemic discrimination never seemed to leave the academic arena in my undergraduate experience. My professors gave me a lot to think about but not a lot to do about it, and as my awareness expanded so did my frustration.

For the first time since graduating from college, First Place School gave me a medium through which I could work through my frustration. It gave me focus in the limbo of unemployment. If the students of First Place get a glimpse of history before slavery and the missions and Columbus Day; if they have something that’s more positive about their heritage than Thanksgiving, then they will see in themselves what others haven’t. They will see beyond who the world tells them they are. They will know better. They will be prepared.