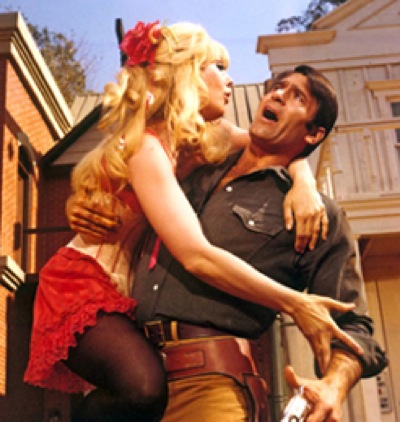 (This is Part 2 in a three-part series by Peter Monaghan, reprinted from Moving Image Archive News, courtesy of the author. Part 1 is here.)

Truth to tell, the wall-stuffing’s references to still-well-known movies was less interesting than listings of movies little heard of, today, and the generally vanished theaters that screened them.

Often but not always, the now-little-remembered films were 1969’s “co-hits,” as cinema operators referred to double-features’ opening offerings. It seems almost quaint to be reminded, now, that in that long-time-ago, double features were almost the norm. This was before the movie industry ramped up its abuses of its customers.

The co-hits screened back then, as well as the plain-and-simple B-, C-, or D-movies, are today’s go-to fillers of TV graveyard hours. The Great Race, for example, ran before The Great Bank Robbery, and like it, employed a quintessential, pervasive Hollywood hook: the appeal of the bad actor.

Not the actor of little talent, but the unruly individual variety of bad actor.

The title of The Great Bank Robbery echoed The Great Train Robbery, Edwin S. Porter’s 1903 twelve-minute western. The latter was one of the earliest narrative movies, and earliest riff on a go-to movie theme ever since: theft is thrilling. The Great Bank Robbery — prolific TV director Hy Averback‘s 1969 spin on that facile riff — was a western-as-farce that starred Zero Mostel, Kim Novak, and Clint Walker. Set in 1880, it depicted a collision among three competing plans to rob a bank in the Texas frontier town of Friendly. (Among its highly unlikely cast of characters: charismatic lawman (played by Clint “Cheyenne” Walker), savvy outlaw, bogus priest, obligatory bandito, corrupt mayor, renegade explosives expert, and Kim Novak as a nun with attitude who poses as Lady Godiva.)

It is a matter for psychologists and cultural historians to determine why robbery, whether of stage coaches, trains, convoys, or banks, has so captivated moviegoers audiences for so long — in fact, since the art form’s first days, and as far afield as Australia. There, in 1906, a celebration of highway criminality, The Story of the Kelly Gang, by Charles Tait, could lay claim to being the longest narrative film yet. The Story of the Kelly Gang traces the life of the legendary infamous outlaw and bushranger Ned Kelly (1855–1880). Written and directed by Tait, the film ran for more than an hour, and was the longest narrative film yet seen in Australia, and the world.

Is it only in recent years — with films like The Assassination of Jesse James by the Coward Robert Ford — that filmmakers have thought much at all about how grinding the Western outlaw’s life must have been? All that sitting around plastered on rotten whiskey, shooting at stones, daggering scorpions, and chafing for the black-hat boss to initiate another snivelling crime against fellow men and women. These days, the gang would presumably be back at the shack riveted to XBoxes for thirteen hours a day.

Double-billing The Great Race and The Great Bank Robbery was a natural — at the least for the consonance of titles. Both exemplify how much makers of popular movies of that and probably any era can assume that a sure-fire recipe for success is daredevil rowdyism, from the irresponsibly reckless to the plainly sociopathic. There’s no missing the appeal of adrenaline-and-irresponsibility genres to swaths of boys and man-boys, but if there’s much that appeals in them to women, there’s something I’m not getting.

At the Neptune, too, muddled gender encounters were front and center, that week. That regal theater opened in 1921, and is now the only still-standing building of the five that operated as movie houses around the University of Washington during the silent era. A couple of years ago, it abandoned film in favor of rock shows and other entertainments. But in August 1969, it had Franco Zeffirelli’s Romeo and Juliet, with Olivia Hussey and Leonard “Len” Whiting. (Whither, he? In 1992 he reflected to People Magazine that his career had followed a course laid out by Orson Welles. Before his star turn as Romeo, he had some high-profile stage roles including 18 months as the Artful Dodger in Lionel Bart’s Oliver! on the West End. He later remarked to People: “Orson Welles once said ‘I started at the top and worked my way downward.’ I can identify with that.”)

Wouldn’t any youth have come away addled from grappling with Argentinian actress Olivia Hussey, fifteen years old and devised by Zeffirelli as blitheringly radiant and extensively enough naked?

The film holds up well now, by the way. Zeffirelli, unlike so many stage directors before him and since, realized that Shakespeare’s invention was not about romantic or tragic-romantic love, but about the onset of delirious, juvenile, lust-superboosted abandon. Other than for the force with which they advance that theme, the deaths are really neither here nor there. Zeffirelli cannily captured Shakespeare’s compare-and-contrast of the lovers’ and the families’ encounters — both mortally serious, but both really quite ridiculous.

Unconvinced? Consider Antony and Cleopatra — or, for an evocation of the midway from juvenility to maturity, the love-on-adulthood’s-threshhold of The Winter’s Tale.

SCHLOCK and other SHOCKERS

But I digress. The near-hits and the appropriately forgotten non-hits…

At a horror triple-bill of horrible films, every offering presumably is not the headliner. The Sunset had a three-threat special that included Herschell Gordon Lewis‘s 1967 schlock-shocker, The Gruesome Twosome.

A demented crone who runs a wig business — for the girls at the local Florida college, she explains — prevails upon her mentally retarded son to kill and scalp young women to provide her with her trade’s requisite hair. “He cuts the overhead, if you know what I mean,” says the ghoulish Mrs. Pringle.

It relieves this cinematic savagery only a little that the make-up artists were severely ham-fisted, and that the plot also has a “co-ed” sleuth investigate the mother and son’s links to additional killings at the college.

However dressed up, the film depends on that horror-film fascination, indulgence, and cliché: gratuitous torture, dispatch, disemboweling, and other disfigurement of young women, ideally discovered naked behind frosted shower screens. Even in the film’s trailer, Old Lady Pringle assures: “It’s a sort of comedy, because [the son] Rodney has a divine sense of humor” — as he gores another young woman.

Also to draw in a crowd, a barker, creepy as any discount-insurance peddler, assures trailer viewers: “If you’re the least bit squeamish, cover your eyes and turn around in your seat.” From the same deranged individual who brought us Blood Feast, “already a classic of horror, and shown at many film festivals,” we now can see “a new film which reaches the heights of nightmarish horror never before even attempted on screen.”

Sharing that lighthearted evening at the cinema was Witchmaker, then just out, in which a psychic researcher and his assistants investigate a series of murders of beautiful young women. “Their Form Is Human But They Have Crossed Over … Is There Sex After Death? They Came To Investigate Witchcraft … and found TERROR!”

Trailer: “It’s been 50 years since a man has looked at me like that.”
Oh, and what do you know: women in underwear raped, hung upside down… With zombification as the end goal, it all flies.

And then Byron Mabe’s She Freak of 1967, in which Jade Cochrane (Claire Brennen), “a country girl who knew there had to be something better than waiting tables in a greasy roadside stand,” runs off with a carnival. She quickly discovers that “she despises freaks and human oddities.” It was the best that $65,000 could buy in 1969. It begins with the caution of a carnival barker: “Ladies and gentlemen, you’re about to behold a sight so strange, so horrifying, so utterly monstrous, that I urge you who are easily frightened or upset, who suffer from nervous disorders, weak hearts, or queasy stomachs, who experience nightmares, and any children under the age of 16, to forgo witnessing this exhibit.”

The guarantee, if you do: “You’ll shudder in panic when you behold lust-inspired human combat, all the more appalling in crimson-stained color” — barbaric acts on “a monster midway on the alley of nightmares.”

All of it “filmed on location on one of America’s largest traveling carnivals, where it could have happened,” with Jade exhibiting the finest in horror gender politics: getting hot for a carnie after he smacks her upside the head.

If the writers of copy like all the preceding haven’t generated a passel of Ph.D theses yet, now may well be as good a time as any.

Virtually every city in the United States — and in a good part of the world — has its own, distinctive cinema history. In Seattle until the end of November 2013, the city’s Museum of History and Industry has a fascinating exhibition — at the museum and online — celebrating the movie palaces and more modest houses of the Emerald City.