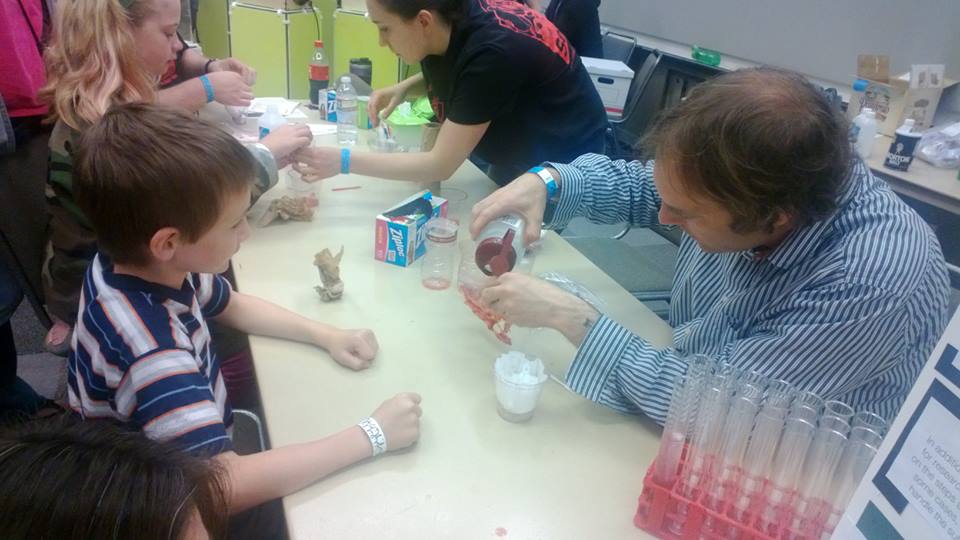 I was eight years old when my father bought me my first chemistry set for Christmas. A massive thing imported from Thomas Salter Science, it contained all sorts of chemicals for experimentation, mostly precipitation, redox and basic analytic chemistry. I played around with it gleefully, learning about scientific principles and dreaming of great things. As I ran out of things or discovered I needed something I didn’t have for a particular test, I would save up my money from chores, lawn-mowing and berry-picking (and trading baseball cards), then head down to Van Waters & Rogers for new stuff. My father not only saw nothing wrong with this but actively encouraged me to do so, with and without his guidance.

By the time I reached high school, chemistry sets were no longer being sold anywhere I looked in Seattle. The only equipment available was on school campuses. I didn’t realize it at the time but there had been a crusade over the past two decades to render the very idea of home chemistry illegal. As that was impossible under the law, crusaders did the next worst thing: they rendered everything designed for young scientists completely harmless and therefore completely useless. The last chemistry set I remember seeing was a “microchemistry set” that contained nothing flammable, and not even large enough quantities of anything to change the color of litmus paper.

If I had grown up in this bizarre world where chemistry sets were neutered because “terrorists might use them” or “someone might make a meth lab” or any other yuppie excuse to avoid scientific rigor (“Oh, someone might get hurt!”) I would never have become a chemistry major in college. The very idea would have bored me to tears. But that is the bizarre world I currently live in, a world where the lay citizen is petrified to think about science and the government officials arrest high school students for having legitimate chemistry labs in their own homes.

It is far from surprising that the United States has fallen dismally behind other countries in Science, Technology, Engineering and Math (STEM) skills, ranking 25th and 17th in math and science according to the Organization for Economic Cooperation and Development. After years of de facto moratorium on amateur science, what other result would one expect?

One way of turning this around is to offer amateur scientists more open laboratory spaces that function independently, and do not require collegiate or scholastic oversight. Enter DIYbio. An old idea but a fairly new movement, DIYbio.org went online in 2008 to lay out the mission and principles for the new amateur scientist. Nineteen U.S. cities began their own DIYbio chapters, yet one of the largest and most well-known cities for biotech, Seattle, was not among them.

HiveBio have finally come along to change all that. With funding from their Microryza campaign (sort of a “Kickstarter for Sciences”), HiveBio are opening a new space Friday, the 18th of October, at the Talaris Conference Center just east of the University of Washington. With donations from the Washington Biotechnology and Biomedical Association (WBBA) and an awful lot of volunteer hours, HiveBio seeks to become a new pillar in the community. Not just a place where amateur scientists can work, but more importantly where all people with an interest in science can learn together.

Part of this learning comes in the form of classes. Treating tangent subjects such as intellectual property and cooking, as well as topics like basic biology and microscopy, the HiveBio classes allow for anyone at any level of interest to find something that will excite the curiosity. Members may also submit their own proposals for workshops and classes.

HiveBio also offers a chance to pursue ideas beyond the tinkering level into the realm of The Big Project. Motivated folks who wish to pursue such projects may submit their proposals to HiveBio’s Safety, Science, Ethics, and Education Committee for review.

One problem HiveBio faces is the eternal problem of scientific research: funding. As founders Katriona Guthrie-Honea and Bergen McMurray note, of all the types of hackerspace DIYbio is the most expensive by far. Having raised the money for their space at Talaris via Microryza, HiveBio will now rely upon memberships and donations to keep the biomaker space running. Anyone may use the space for a drop-in fee of $15. Beyond that membership is variable. Current rates are:

Keyed members are given keys and therefore have 24/7 access to the facility. There are also four desk memberships available that also include a personal desk and private storage space.

As with all hackerspaces, the important ingredient is social. While they also have a Google Group, HiveBio’s true strength is that their space allows face-to-face interpersonal contact. On any given day one might meet a software programmer, a Ph. D. biochemistry student, a scientific illustrator, a medical photographer, or a commercial lab worker from a big biotech firm who simply wants to work on something on her own. All these people bring their perspectives on science with them and as they share ideas, the entire community benefits.

As Shawn Crawlson, executive director of the SciTech Hands On Science Museum, says, “Learning follows interest and interest follows fun. The U.S. is way behind the rest of the world in the quality of science education and science literacy and part of it is because we are not doing anything to get kids excited.” Two generations of castrating children’s access to home science has made that problem severe. Science is up against widespread ignorance and from ignorance, fear. “Many people who are not scientists have a hard time believing the idea that there are pretty reasonable reasons you want to have beakers and Bunsen burners,” said Theodore Gray, an editor at Popular Science. “It’s hard to argue in favor of selling kids dangerous chemicals, but on the other hand you can go down to the local sporting store and buy a gun and buckets full of ammunition with no questions asked, depending on what state you live in.”

It will take major changes of policy around the country for that to turn completely around. Meanwhile, every little thing that demystifies science for the laity helps. The new wave of open biomaker labs does just that. Seattle has been overdue for DIYbio. Finally, through the efforts of HiveBio, we can begin to catch up.

HiveBio’s Grand Opening happens tonight at 7 pm at the new HiveBio space: Building G, 4000 NE 41st St, Seattle WA 98105. Parking is available in the East Lot. If you have any questions, contact HiveBio at hivebio@gmail.com.