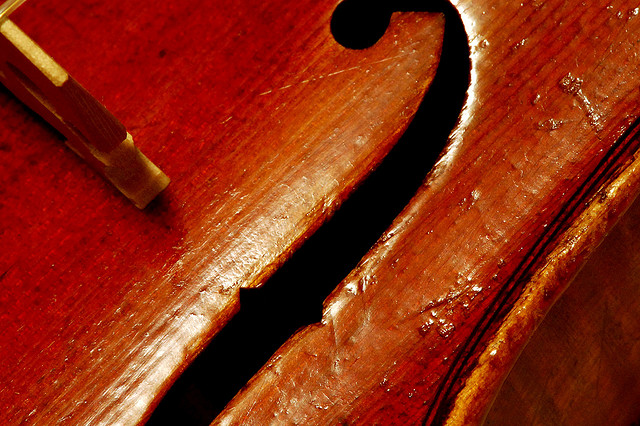 It was during Vivaldi’s Violin Concerto in G Minor that reason was replaced by obsession.

For most people – male or female – watching Yolanda Dasile was always an experience. For Alan it took him to the threshold of orgasmic ecstasy. To watch her play was to sup at the table of the Divine.

The sounds from the violin tendrilled out in their own form of sped up time-lapse photography. Each note crashed against him, battering him with exquisite pain; a long nail scraping the inside of his thigh. Each saw of the bow licked across his abdomen, making him suck his breath back in large gasps.

Every pause in the rhythm prolonged the agonizing anticipation of the crescendo.

By the third movement he had become part of the music, he was the violin, each rake of the bow pulled forth a moaning keen.

His breaths turned into short, sharp gasps that kept time with each bounce of the bow until he couldn’t inhale any more.

The harsh, quick slap and drag at the end of the phrase finally wrenched the air from his over-loaded lungs.

Yolanda bent and curled around the violin, a boa constrictor poised to swallow its prey. Alan surrendered. He rolled, he writhed, he hallucinated; his mind detached from his body and joined Yolanda’s essence as it rolled off the stage absorbing every soul in its path.

Alan looked around the dinner table, his description of the concert finished. The room was silent. Forks barely supported by limp hands hovered in midair on their way to opened mouths. Whether the mouths were open to receive the food on the forks or open in awe of the description was impossible to ascertain.

Alan shrugged. He said it, he meant it, he felt free. He smiled. “You asked for my opinion of the concert, I gave it.” He almost turned his back on her.

She looked around the dinner table for support but she was met with noncommittal expressions instead.

At the other end of the table David cleared his throat. “Uh, actually… I think it’s a fairly apt way of describing the concert. ” He gave a wan smile as his wife’s hand slid off the table and out of sight under it.