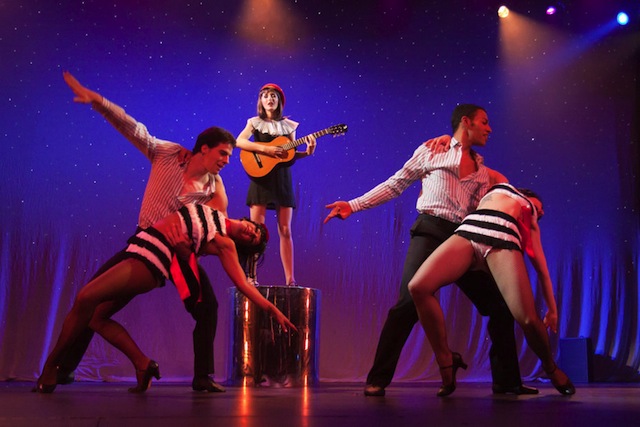 From the first moment the bob-haired hostess rides across the stage on a diminutive tricycle, one can sense something special about to happen. As the curtain rises, strains of France Gall’s “Laisse tomber les filles” fill the air. A duet of suave French garçons smoke their cigarettes with a slick, affected air Seattle’s hipsters only wish they could mimic. Two lovely demoiselles parade by, their moves stylized. The setup seems obvious. It is not. The boys do their flirtation dance with the girls, then rudely drop them, clearly only interested in each other’s manliness. They pair up and dance off into the midnight blue.

Kitten LaRue’s section of L’edition Française is an extremely hyperreal look back to the world of the French Scopitone. Everything is stylish, too stylish to be true. Yet the choreography is so deft it acquires a brash beauty. It is so refined that its moves and strokes play as broad as vaudeville while remaining oddly real. This tone carries through all seven of the pieces in the opening section, especially in France Gall’s “Bébé requin” and the lovely closing number, Jocelyne’s “Nitty Gritty.” It’s clearly affectionate and Ms. LaRue gets to play here with the line between neo-burlesque and classical ballet.

Where the line between ballet and burlesque is permeable in Ms. LaRue’s choreography, in the second section of the evening, it has erased completely. Olivier Wevers is known as one of the finest choreographers in Seattle’s modern ballet scene, so it is no surprise he brings his affection for classical line to this piece. Having said that, “Coquette” is by far the most lurid piece of the evening. I mean that in the best possible way. Its raunchiness is stylish in a way that one expects from Frenchmen, but it is not even remotely coy. The swapping of sexual positions takes on a symbolic quality, too, for the swapping of sex and gender roles. Tory Peil and Jon Betchtel each alternate as top, bottom, aggressor, submissive–whatever sexual role they desire. In merging their own desires, they liberate themselves and the other from expectation and find themselves complete. The woman wears the robe and the man wears the pasties. Gender is another bodily fluid. Or so I read it. That the rawest, most sexual part of the show should be choreographed by the only male choreographer of the evening I leave the reader to ponder.

Lily Verlaine’s final section picks up this raw sexual quality and returns it to surrealism. The 28-minute “L’histoire de Melody Nelson” goes to the heart of Serge Gainsbourg’s album. The album itself is more like a symphony with various movements or a abbreviated “rock opera” as they’d say in the 70s. Ms. Verlaine brings out the dark, creepy eroticism of which Gainsbourg was a master. The theme of submission as a means of liberation is particularly stark in Ms. Verlaine’s visual representation of “L’hôtel particulier.” The closing number “Cargo culte,” however lifts the evening into an incredibly supernal beauty with its seafaring theme: sexuality as a very deep, very phantasmagorical ocean. It is completely stunning to behold.

I would write more on the subject, but there is only one day left for you to take yourself down to the Triple Door, and I had rather you spend your time getting in line.