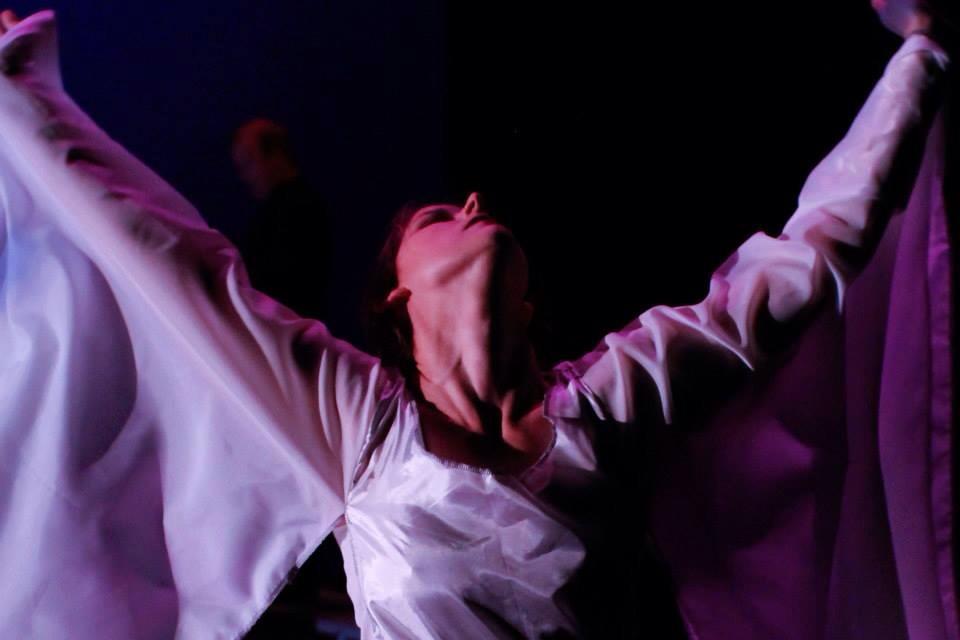 As dance and singing share the same root, I have always wondered why classical musicians have ceased working with modern dancers–or is it the other way around? It was not always thus: Martha Graham shared a close bond with Samuel Barber, among other instances. Modern dance has moved further and further away from modern composed music as each becomes more rarefied in its own specific vocabulary.

It pleases me to no end when I see dancers and musicians buck that trend. Seeing a choral concert with choreographed dance gives me a bit of optimism. Even better when the dance companies are as brilliant as the Karin Stevens Dance company and Sapience Dance Collective.

For the concert, Karin Stevens and her company have collaborated with the University Chamber Singers on Benjamin Britten’s A Boy Was Born. After a short intermission, that piece is followed by Randall Thompson’s The Peaceable Kingdom which receives the choreographic attentions of Sarah Seder and her Sapience dancers.

The two choreographers’ styles complement each other. Just as the youthful Benjamin Britten’s approach is more intricate than Randall Thompson’s rather straightforward lyricism, so the two choreographers have taken different approaches to the music.

Britten’s A Boy was Born is early Britten–very early, as in Opus No. 3–but it remains one of the more challenging choral works in the canon (forgive the pun). The UW Chamber Singers here under Geoffrey Boers have produced it in a somewhat abridged version. But this abridgment, I think, makes the interaction between the music and the dance more powerful.

Karin Stevens’ piece is, like Britten’s, the more elaborate work of the evening. In literature the Christ is often identified with wood–a crown of thorns and a crucifix being the most obvious. One can easily connect that to the Greek element of earth and by extension the Earth itself. This is exactly what Ms. Stevens has done. Ms. Stevens expands this idea into a progressive series of images in which Christ as the Earth Spirit evolves through contact with the other elements. Earth and water (in the form of snow) meet air (the hibernal wind) and merge as love (fire). Various other seasonal metaphors provide reinforcement for this essential journey from the bare earth of Autumn to the fruitful promise of resurrection and Spring. The dancers remain primarily low to the ground, quite earthbound, and the costumes accentuate this metaphoric journey.

Beginning with earth tones for the Christ figure in the first duet Jesu as Thou art our Saviour, Ms. Stevens’ adds white in the form of the three Magi who follow the stars (another metaphor for air) on their journey. A setting of Rossetti’s poem In the Bleak Midwinter then introduces the next element:

The essence of the poem, however, is more about the Mother than the Child. Garbed in a deep blue, the mother here represents that “water like a stone,” and is the leader of this section, which is a complementary image of the earlier duet.

The final section of the dance is as elaborate choreographically as it is musically. Bringing back the first three elements, each slightly transformed, the dance introduces the divine fire of love, represented by the future Christ the King figure, now dressed in crimson with tones of royal purple.

For his composition, Randall Thompson chose eight texts from the Book of Isaiah, but the piece itself is really in three parts. After the solemn prelude of Say Ye to the Righteous the piece divides into two parts, the first quite brusque, the second rather more light and glorious. Too, this dichotomy is present in the lyrics: the wicked shall suffer, the righteous shall prosper. Thompson emphasizes these themes musically as well, orchestrating the piece with firm declamations as the words practically spit at the audience during sections of The noise of a multitude (“their faces shall be as flames”). The sophisticated dissonance of The Paper Reeds by the Brooks, in which the soprano and bass move apart from each other in parallel is a gorgeous orchestral metaphor for the ascent of justice over the descent of evil. Thompson’s beautiful score holds all sorts of discoveries like this for the attentive listener, yet is eminently straightforward, as American in its linear approach as the Britten piece is European in its fugal intricacy.

Sarah Seder has asutely grasped this in her choreography. As Thompson’s music focuses on the clarity of the words. It is a shining instance of Monteverdi’s dictum that music ought to “make the words the mistress of the harmony and not the servant.” Ms. Seder applies this, too, to the dance. Here the music is clearly the mistress of the dance and not its servant. The gestures within the dance come immediately from phrases within the music. Where Ms. Stevens sometimes plays against Britten’s counterpoint, Ms. Seder firmly commits to Thompson’s compositional medthod. Her work, like Thompson’s, is apparently simple. (No one will ever accuse Randall Thompson of not having written singable melodies.) But within the simplicity is an extraordinary freedom of gesture.

From the very opening Say ye to the righteous, Ms. Seder shows an excellent eye for simple grace. The costumes are simple primaries: three dancers in green, two in red, two in blue. The color-coded dancers each enter and make their first move not in unison but by group, dependent upon the words (“reward of his hands” triggers a hand gesture, for instance). From there they build their movements from the verbal rhythms of the text from Isaiah 3:10. Initially bound to the earth, the dancers explore the possibilities of basic leaps, simple amalgamations, provisional weight sharing et cetera. It’s all very straightforward, but Ms. Seder’s dancers draw profound emotion from this economy of means. The Howl Ye and The Paper Reeds by the Brooks sections are masterpieces of unadorned, direct emotion. From the most rudimentary gestures, Ms. Seder emphasizes emotional power of the words through an increasingly dense construction of pristine moves.

If I’ve any complaint, it is only that the piece is too short. After the interlocking lines of the last piece have built from simply introspective to completely celebratory–and so it should be, when the text is “Ye shall have a song”–I felt a bit remorseful that it had to end so soon.

The UW Chorale make the piece sound simple despite its complexities. Most importantly, though, one can feel their joy at music making. Giselle Wyers has gone for clarity rather than sonority with her chorus here and this decision accentuates certain effects in Thompson’s music. The dissonances here are somewhat subdued, but the choir sing with an immediately notable enthusiasm. This is not at all the sterile, stationary choir that is a cliché of 1980s performance. The musicians move with the music and obviously delight in the composer’s gift for a kind of modernist shape-singing.

Dance and music can still learn much from each other. Each can inspire the other in myriad ways that remain yet to be explored by artists hungry for something beyond the average. This program proves that point. The unity of dance with music has made both of them stronger. I hope to see more such collaborations in the future.