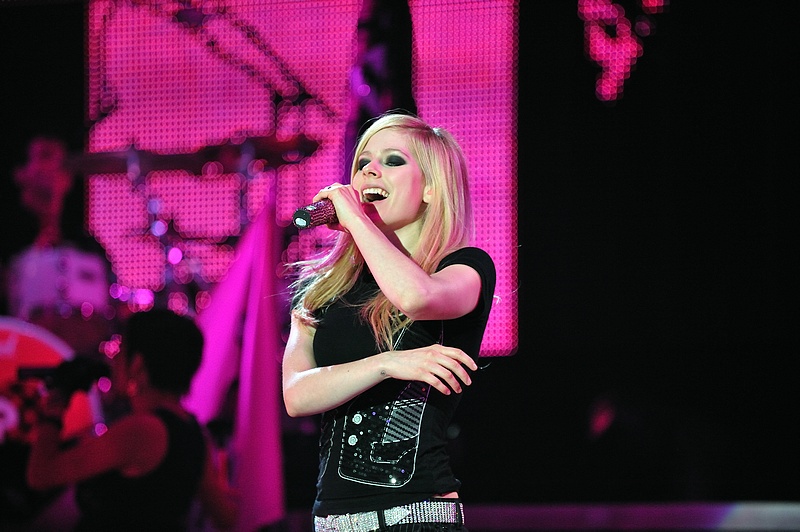 The first time I heard it, it made me sick… I thought it was the ugliest thing I’d ever heard. The second time I heard it, I started to cry. –John Fahey on Blind Willie Johnson’s “Praise God I’m Satisfied”

The first time I put on Avril Lavigne by Avril Lavigne, I switched it off about 30 seconds into “Rock N Roll” (pronounced “rock an’ roll”). I can’t tell you now why I did that. I get plenty of Auto-Tuned stuff on the radio stations I hear in the pizza restaurants, in the Union 76 where I get my breakfast each morning. So, not the Auto-Tune alone turning me ugh, more that plus the rallying cry for bad behavior, ticking things off a list, check marks on so many boxes.

Then trying one more time, I received the (a?) revelation. I didn’t start to cry the second time. But something began to sink in. I’m on roughly my fifteenth time through it now. Slice off the first three songs (add the fourth if you want a wider-lensed cool-off) and you’ve got an EP of the funniest, community-buildingest, check-marked, romanticized adolescence since Bat Out Of Hell, which as all right-thinking people know, is The Greatest Album Ever, or at least Dawn Of The Dickies, which belongs to the ages also, but, being freaked by geeks, does include plenty of visions from the couch in front of the tube. Avril Lavigne is out in the street. (And proudly not a boy to boot.)

Ms. Lavigne turned 29 this year and sings, I figure, to folks 10-15 years younger. I didn’t pay any attention to her before and deliberately haven’t listened to her anything-else. I want the thing in itself–this isn’t scientific, I’m hoping it’s revelatory concerning this thing in itself.

She practices Auto-Tune as a default methodology; that’s no news. Entire radio stations, meaning one entire genre (mainstream pop) feeling like one entire universe to itself, all sounding like itself, incorporating younger performers and absorbing older ones. And Auto-Tune, spiritually speaking, aspires to turn every voice into every other voice. One voice. We might as well take it spiritually. Such voices rise; will they converge, produce a singular sound All One (passion) like Dr. Bronner wanted—the revelation?

Maybe not. We’ve been let down before. But we are still waiting.

That furnishes anthems. That furnishes anthems with always-upward whooshing, pitch-bending, up signifying better, higher, manifesting the moment in “17” where me, her, and the song are “running red lights,” “goin’ all night.” (I never learned to drive, but I’d fly my bicycle past the house of my year-long crush after they’d all gone to bed, accelerating downhill, not quite mustering guts to blow through all the intersections top speed. Down below lay Gasworks Parks if I didn’t brake.)

It isn’t real, I know that. At the very least, it’s cherry-picked from the minutes, the years, the age, of a lot of boredom, some frustration, possibly oppression. (And it’s cherry-picked from those moments in the lives of recent-history North American kids.) For me–just for one example–17 included my parents’ breakup (hollow promises of “trial separation”), my first major-grade depression, several suicide attempts, nobody understood me and I wasn’t at all sure it was worth the effort for anyone to. Implosion. Nowhere to run. I was of course lucky to be a recent-history North American kid, for all the gratitude I had for that.

But hey, I want to believe in myth and practice transcendence as much as the next.

When Virginia Woolf saw a stain on Lytton Strachey’s pants and impishly asked him ‘Is that semen?’ she and the other ‘Bloomsburies’ were doing what they could to stake out new terrain. –Nicolas Delbanco, from The Art of Youth: Crane, Carrington, Gershwin, and the Nature of First Acts

Misbehavior. Of course each new “generation” comes new to acting out. But some of them don’t know their history so they understandably don’t know any better; others take inspiration from the past; some take inspiration from the past by disavowing and attempting to destroy the past (by ignorance and/or by deliberate acts of negation). I’m betting all but the most arch, though–the most history-obsessed, the least likely to make their own original history stay susceptible to fresh anthems.

Mixed messages abound in this anthem pack–some humorous (that age gap between the singer’s assumed personas of her target audience, and her target audience), some funny and sad (the days-of-yore reminiscence of “17” comes right before the anticipation of “Bitchin’ Summer,” her cast young and poised anew, another quarter inserted), some pointedly contradictory (take a look at the cover, then tell me “I don’t care about my makeup”—second line, first song), some fish-out-of-water (she’s Canadian, but her “when the PO-lice come” is pure Richard Petty), some ignorant but charmingly so (“We don’t need no one to tell us who to be/We’ll keep turning up the radio.” No one that is, except the radio–Mission Control). It won’t last. It can’t last. I was out on the Ave the other day, I saw the street kids (I think of them as kids) smoking around, and shouting at, a kid in a stroller. Saw a brand-new father by the downtown Post Office with the baby strapped to his chest, smoking. Even if you don’t succumb to bad choices, to temptation, your nail that sticks up gets hammered down. Even if you try sticking out sideways.

And no, I might not be so susceptible to such anthems were I not recently out of a relationship, out of a job, resigned to financial ruin, unable to understand machines, electronics, and (yes, saddest of all human beings). I’m not destroyed, but I am resigned. I don’t need a reason to live, but I’m looking for some comfort in my cave.

I loved other records longer and weirder and subtler, this year. But I pressed play on this thing until it would have started to wear out had it been made of LP stuff. That’s the last and least-faceted urging I can give you.