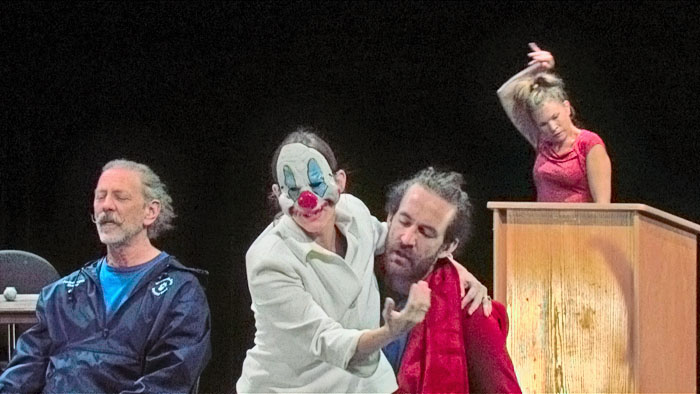 Dayna Hanson explores the phenomenon of violence in her latest piece, The Clay Duke.

But a situation is not a plot, and a plot is not a narrative, and a narrative is not a story. The story coheres through repetition and a series of permutations in technique. Some scenes are naturalistic. Some are absurdly self-aware. Some are verbal. Some are physical. Some are speech. Some are music.

Ms. Hanson moves the piece along those three axes in various combinations, each combination adding a new level of understanding to the basic situation. What seems to be another simple story to be dismissed on the back page of the local newspaper’s B section actually contains the totality of American madness, if one is willing to remove the patina of realistic reportage.

The performers obviously commit themselves to the premise and, as one might expect, are exactly as good as they need to be. Sarah Rudinoff’s gift for fast talk comes in handy for her in two notable scenes that point out the surreal quality of mundane discussions about small town politics. Wade Madsen and Thomas Graves are, quite literally in the piece, two halves of the same person; they show an excellent sympathy with each other that make the central character’s psychology seem even creepier than it probably is. Peggy Piacenza and Dayna Hanson have been working together so long that they are seamless, too, when they share each other’s space–a particularly good quality to have in the scenes where the cast break into rhythmical, locked dance numbers. Dave Proscia, too, is no stranger to working with Ms. Hanson and adds a kind of pleasant unpredictability to it all, tying together even the most abstract variations in plot with his apt musical numbers.