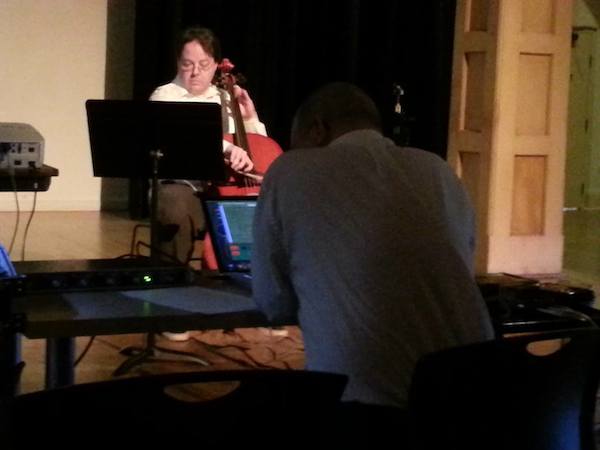 Josh Parmenter is a Seattle-area composer and software developer. He studied composition at UC Berkeley, then moved to Seattle in 1999 for his masters and doctorate in music at UW, focusing on both acoustic and electro-acoustic music. He’s collaborated with other composers, music performers, dancers, graphic designers, choreographers, actors, and writers.

We’ve talked about many of his compositions and collaborations over the years. Though we’re in different areas of the arts — he’s a composer and I’m a writer — he’s coached me through the artistic process many times. He’s also my husband, my partner of more than 20 years.

One of the most interesting projects he’s worked with is celebrating its third Seattle anniversary on December 21st in Wallingford, an outdoor traveling performance of Phil Kline’s piece “Unsilent Night.” I’ve written about the experience of being an audience “performer” of the piece for the Star, but more details about this year’s performance are available here.

Seattle Star: You’re a composer and an app developer. Can you tell us more about how you came to develop an app for Unsilent Night?

Josh Parmenter: This is a bit of a story, but I think it goes well with the theme of collaboration… Before building apps for phones (and still now), I have been a pretty heavy contributor to a number of open source projects for applications that focus on sound. One of these projects was “Ardour,” an open-source digital audio workstation for sound mixing, multi-track recording and mastering.

The lead developer for Ardour is Paul Davis, who lives back east. One of the common things I have found in many open-source projects where developers come together out of common interest, rather then location or for a job, is the collaborative nature involved in the whole process. You are working with people who may be just about anywhere in the world. But I’ve also noticed that in open-source music projects, many of us are also pretty big music nerds, and aren’t shy about giving suggestions to those around us about music you should hear (in other words, the “music I’ve heard that you haven’t and this should impress you”).

So one night I am in a chat room working on some parts of Ardour to help get a version for Mac OS X out, and Paul asked if I had ever heard Unsilent Night. He described a performance he had been at in Philadelphia, and it sounded amazing to me. This was already early December, and there wasn’t a performance planned in Seattle that year, but I really wanted to hear what it might sound like.

I downloaded the tracks and created my own virtual version of the piece in SuperCollider, another open source project for sound synthesis. I created a couple hundred virtual versions of the tracks that moved around the space between speakers, played them at slightly different times and played some faster, some slower (to mimic different tape speeds). I loved the whole thing so much that I made it the final lesson for the sound synthesis class I was teaching at UW for the Fall Quarter. Kind of a holiday sendoff for the break.

A couple years later, when I had started a small company called Rockmore Tech with a few friends, I thought about doing a mobile version of Unsilent Night, partly as a way to learn how to deal more with audio on iPhone. I contacted Phil and asked him about it, and he was thrilled to have a version.

One thing he had mentioned in one of our emails back and forth to each other was that he missed how the tape parts would fall out of sync, and I mentioned the SuperCollider code I had done for my class. It is one of the parts of the piece that I found the most beautiful, and we worked it into the application. On the device, whenever you start playing a track, it adds some randomness to the speed to create this older tape artifact.

The first year that we did it in Seattle, though, caught me completely off-guard. As a composer of electronic music, I felt pretty proud of the little virtual version I had made, but it didn’t prepare me at all for what we heard live that first night — the sound echoing off of walls, mingling with traffic sounds… how alive the whole body of people felt walking around Wallingford in this cloud of sound. It really was quite stunning.

What has collaboration meant for you and your composition career?

I think it is an important part for any composer, or artist really, to have strong collaborative relationships, even with work that may not end up with your name on it. Working on large projects that needs perhaps many composers, musicians, lighting designers, dancers and dramaturgs creates experience that a composer working alone in their studio will not get.

Of course it is important to develop a personal style and repertoire, but there is so much to learn from the work of others that to shut yourself off to collaborative experiences can really hinder artistic growth. I can’t imagine what my work would be without the experiences I have had working with the composers at UW (first as a student, then as a researcher and teacher), along with the work I would see come from my students as well as the other artists that I have had the opportunity to work with.

Most importantly, I think collaboration gives me the chance to continue the learning process. Hearing, seeing and feeling what others do in that collaborative space gives the brain so much food to chew on. And there is no need for it to stop happening! I hope to be collaborating on projects for the rest of my life.

What does collaboration look like in the app for Phil Kline’s Unsilent Night?

For Unsilent Night the initial work and turnaround to get the application into the store was quite fast, and since the piece was already composed, it really was more of a thought process about how best to present it as an app. I wish I could say more thought had gone into it, but right now it really is just a play button with some buttons that point to links about Phil, the piece and the current year’s schedule.

However, Phil did hire Rockmore to create another application for him for the “Lincoln Center Out of Doors” festival a couple summers back. With this piece, we got to talk much more about what the devices we were using could do. That work, dreamcitynine, was an homage to John Cage and his piece Indeterminacy. Phil worked with a few dozen artists to collect recordings of them reading one minute stories that Phil transcribed, and I typeset for the app to display.

The application then plays the stories in a random order for you, and if you go to Lincoln Center, you can even have the application play the outdoor space for you. GPS coordinates are coded into the app, and as you walk to different areas the stories will get triggered to start playing. These were all things that we discussed while the app was being made. It was a lot of fun to discuss what these devices can do and finding artistic uses for the data that was available to us, and some of this thinking is still in the back of my mind.

I recently finished a small application that collects as much of the data as possible and can transmit it over a network to a computer listening for data from the app. This data can then be interpreted to influence sound based on movement, location, sound and other aspects of the environment around the device.

In your experience, what have been the necessary ingredients for successful collaborations?

I think there are two very important things needed for successful collaborations. The first (and probably most important) is having participants with an open mind to new ideas (but who have come together with at least a general goal in mind). Without the willingness to learn, explore and grow I don’t think the experience can be a collaboration.

The second is a deadline. With some event or performance in mind, collaborative experiences will add some pressure that I think is good for the thought process. I won’t say that short deadlines make for better work, but I think having some date that has to be hit for a performance makes the work more efficient and focused.

During the process, what kinds of collaborative pitfalls have you had to avoid or work through?

The same two things as above actually. Being in a space with that much creativity going under a deadline can be invigorating, but you can also end up in a place where all involved haven’t had the rest that is needed while working so hard. I’ve seen a couple of times where the process doesn’t hold up well under the pressure, or where the personalities involved start to clash rather then collaborate. It happens, and I think it shows that those working on the project were invested and creating. But that doesn’t mean the collaboration will always be successful. Just like in the sciences, sometimes the experiment doesn’t work.

Any suggestions for who should I interview next?

The composer Tom Baker would be a great person to talk to. Or Steve Peters, another composer — in a way, Steve has been collaborating with the City of Seattle for many years now.

Unsilent Night in Seattle will be performed by audience participants on Saturday, December 21st, meeting at 7:00PM  at the Good Shepherd Center in Wallingford.

The Finest Worksongs is a Seattle Star series about artistic collaborations in the Seattle area. Suggestions for future interview subjects are welcome.