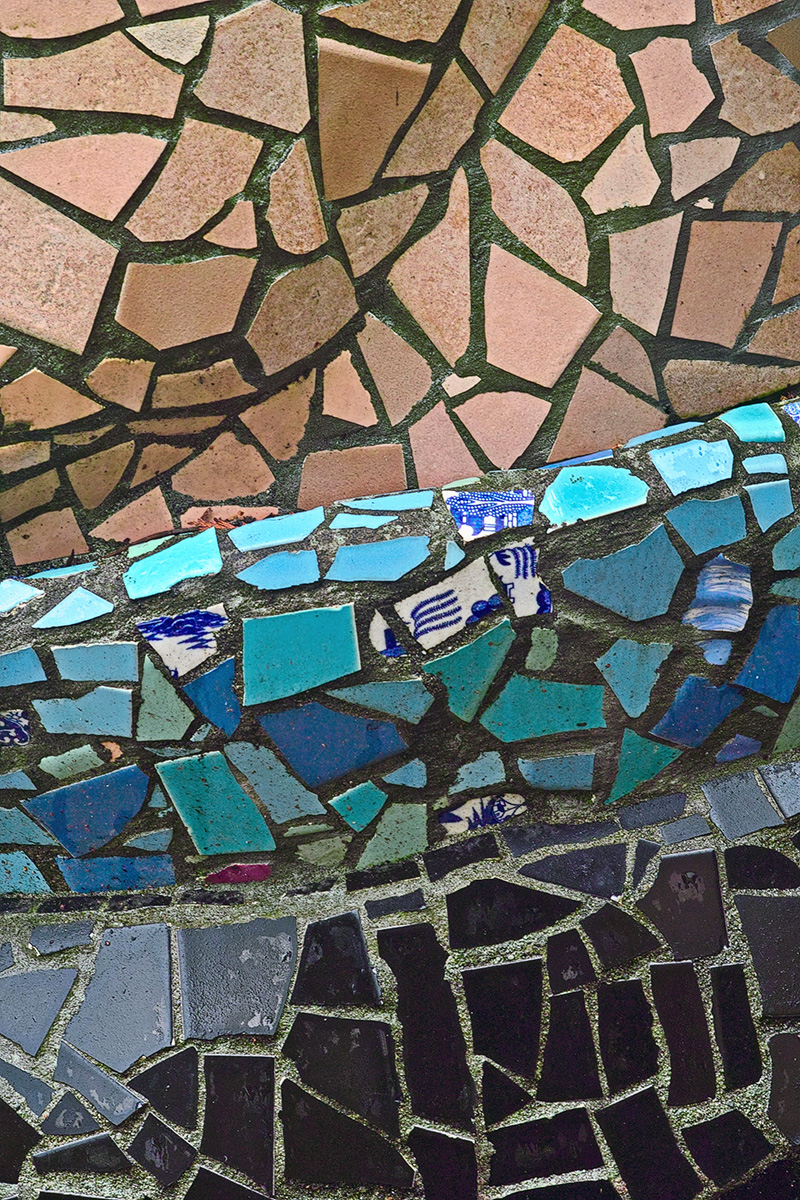 Merrily Tompkins is known mainly for her small works. Her work in silversmithing and jewelry especially made her reputation as one of Seattle’s bright young artists back in the 1970s. It was somewhat surprising when, in 1977, the new Seattle Arts Commission asked her, Clair Colquitt, and Ries Niemi to redesign the entire Creston-Nelson substation for Seattle City Light.

One of the earliest of the so-called “artist design team” projects in the country, the Creston-Nelson substation lay in a most inauspicious location. A cynical observer might easily note that the substation itself hides easily not only from the city but also from the neighborhood in which it lies. The Rainier View area has always been a kind of Skyway Lite: an out of the way working-class neighborhood of various ethnicities, far from artsy and even farther from wealthy. That it is the site of a fairly large electrical substation is probably news to most of its residents. Indeed if one were to drive along the arterial of South Bangor Street, one might never see it at all.

A fitting venue, then, for Seattle to place a new design project. If it failed, no big deal: no one would ever notice it. If it succeeded, the arts commission could pat itself on the back and try the same idea in a “better” location, more visible to other (and here the cynic points out: largely white) citizens.

For this project, all three artists worked together on the gates and the environmental feel of the location, as well as adding sculptures of their own to the cooperative design. Ms. Tompkins’ redoubtable skill with metal came in very handy in fabricating the sculptural gates and the other piece she created with the assistance of Clair Colquitt, Plugged.

Finished in 1982, the substation and the skill of the artist design team’s work shine to this day. Yet in some sense the project was an object lesson in the notable failure of public art to match its neighborhood. Given the remoteness of the location itself, and the economic environment around it, several of the pieces were vandalized repeatedly. Finally, Seattle City Light had to move them. When the North Seattle Service Center was remodeled in 2002, two of the pieces from the Creston-Nelson substation wound up there.

One of them was Merrily Tompkins’ lovely Tesla’s Head, which was inexplicably retitled Big Tesla for its new location. I’ve always loved this piece, even in its old location. I used to ride the #68 Metro from Beacon Hill sometimes and I’d get out here near the end of the route just to mess around at the substation for a bit before making my way back to the horror of Skyway. I have always loved Tesla, anyway, and the artwork was, as I would say in my teens, “pretty rad.”

Though it’s a larger piece from Ms. Tompkins, Big Tesla still shows her love of visual puns and her remarkable eye for turning commonplace craft into art–if one believes in such a separation–both of which qualities typify her smaller work as well. In the middle of intricate mosaic work, one can espy beads, broken mirror pieces, opaline and old dinner plates, all inserted with the unpretentious playfulness so admirable in Pacific Northwest artists like Chuck Greening. But more than just another decorative piece of sculpture, Big Tesla also serves as a planter, where plants may take root in Tesla’s fertile brain. Ms. Tompkins has said that she always thought of the open sculpture as a metaphor:

Having grass grow out of the top for hair seemed like a logical way to relate the piece literally to the landscape. As the piece evolved, I realized that making the grasses seem to emerge from Tesla’s head was also a kind of visual reference to his enormous, ubiquitous contribution to the “domestication” of electrical power.

Ms. Tompkins always likes her work to do more than it seems. And so it does.